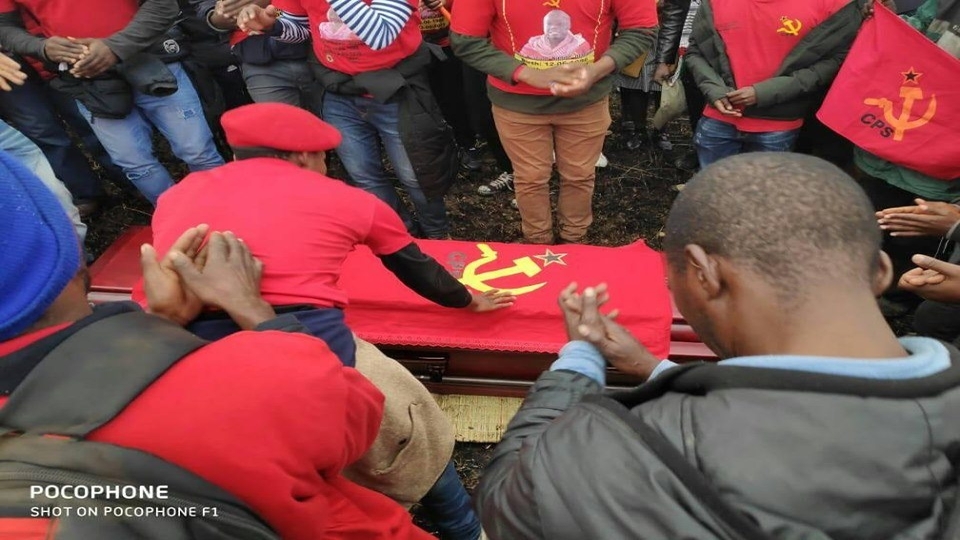 Njabulo Dlamini, who died on May 23, was the General Council of Swaziland National Association of Teachers.

A number of trade unions in Swaziland have demanded an inquiry into the death of Njabulo Dlamini, the international organizer of the Communist Party of Swaziland (CPS) and a member of the General Council of Swaziland National Association of Teachers (SNAT).

Dlamini died at a hospital on May 23. He reportedly succumbed to an illness he contracted shortly after he was released from prison. Earlier this week, the unions expressed their suspicion of the official account of his having died due to natural causes.

Sources told Peoples Dispatch that a key reason for their suspicion was a statement by doctors that the liver damage which led to his death was due to drug abuse or poisoning. Since it is well known that he was not a drug-user, the suspicion that he was poisoned is gaining currency.

At the mobilization in the eastern town of Siteki, which brought together several unions of civil servants who are preparing for a strike on September 23, Sizolwethu Masina, chairperson of the Siteki branch of National Public Service and Allied Workers Union (NAPSAWU), alleged that Njabuo was killed for his political and trade union activities.

“Comrades, you must remember that comrade ‘Njefire’ (as Njabulo is popularly known) was arrested for jaywalking a few months before his death and he was locked in a police cell for a whole night. We don’t know what happened in the cell that night,” he said, alleging that he may have been poisoned by the police, according to Times of Swaziland.

This arrest he referred to was on January 11 this year, when Dlamini, along with Mcolisi Ngcamphala, who is an executive member of SNAT’s Big Bend branch and the Deputy National Chairperson of CPS, were arrested for a traffic offense – crossing the road at an unauthorized point.

The two leaders were on their way to attend a meeting at SNAT’s headquarters in the city of Manzini. The meeting was in preparation for the January 28 strike action by civil servants who were demanding Cost of Living Adjustment (CoLA).

“On our way to the meeting venue, we were confronted by two traffic police personnel who accused us of jaywalking. We were being confronted for an offence which in fact never happened and, interestingly, we were singled out from a group of workers who were walking with us to the venue, crossing the same street and together as a group,” Mcolisi told Peoples Dispatch.

“As we were trying to reason with the two traffic police, suddenly a team of about 15 plain-clothed police officers pounced on us and started assaulting us. They dragged us into a police van where we were bundled up. We were then detained in different holding cells.”

Mcolisi was held in a solitary cell, while Njabulo was held in a cell along with another person who was accused of robbery. “From what I saw”, Mcolisi recollected, the police constantly visited Njabulo’s cell on the pretext of questioning the other person.

After five hours in detention, they were finally released after human rights lawyers intervened. They were charged with jaywalking, obstruction of police on duty and resisting arrest. Mcolisi continues to attend court trials in connection with these charges.

“The workers with whom we were walking to the meeting venue followed us to the police station. They stayed there until our release around 3 pm. From our cells, we could hear them singing outside and it was this revolutionary spirit that kept us moving forward,” Mcolisi recollected.

“A few weeks after the arrest, comrade Njabulo started complaining of chest pain which also caused him breathing difficulty. He visited the hospital and had a number of tests,” he added. Tests found damage to his liver and an abnormal shade over the lungs, which was later found to be fungal pneumonia.

He was then hospitalized, where he spent three weeks before succumbing to his disease. Doctors attributed his liver damage to “either heavy reliance on drugs or poison. It is well known that Comrade Njabulo was not on drugs, thus leaving the latter as a possible reason for the liver damage,” Mcolisi said.

In this country ruled by the last absolute monarch on the continent who reigns above the law, “the suspicions do have a solid base especially when you know from history how the regime has dealt with political activists, especially those kept in its prison cells,” Mcolisi added.

“People have been suspecting that the regime might have had a hand in the death of Comrade Njabulo. I was even advised by many comrades, including close comrades who are doctors and nurses, to undergo tests to check whether I wasn’t also affected with poison.”