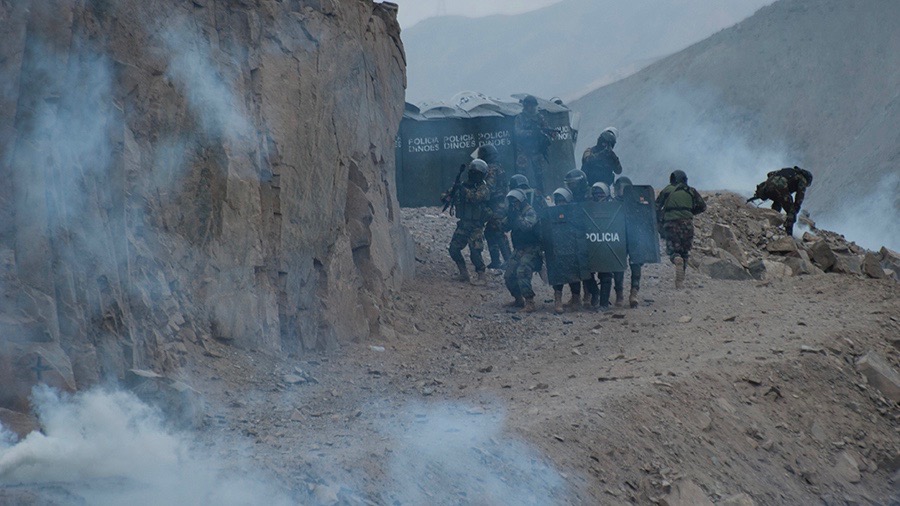 Clashes between officers of the National Police of Peru (PNP) and the farmers of the Tambo Valley, opposed to the construction of the mining project, have not ceased.

On September 7, two protesters were severely wounded by gunshots during a demonstration against the construction of the Tía María copper mining project. The incident took place when the police forcefully tried to clear a road blockade in the Islay province.

The more seriously wounded, 23-year-old Hugo Roque was immediately admitted to a state hospital in the Mollendo town. The other injured person, who did not want to be identified, was hit in the leg and was admitted to a nearby hospital in the Cocachacra municipality. In the past eight weeks of protest, several incidents of violent police repression have been registered and a number of people have been injured during the conflicts.

El Búho, a regional media outlet, informed that the police have been using firearms on a daily basis but the mainstream media is hiding this fact. It added that while people were getting wounded by firearms everyday, they were not going to the health centers due to the fear of being detained by the police.

In July, the right-wing government of president Martín Vizcarra had deployed over 400 officials of the National Police of Peru (PNP) in the region to stop the protests. In the last week of August, the government also authorized intervention by the military forces, in support of the PNP, at the hydrocarbons terminal in Mollendo.

Since July 15, thousands of farmers and inhabitants of the Tambo Valley, in the Islay province of the Arequipa region, have been striking against the decision made by Vizcarra’s administration to authorize the Mexican mining company, Southern Copper Corporation (SCC), to begin the construction of the long-resisted Tía María copper mining project. In addition, since August 5, the agricultural, educational and civil construction workers of the Arequipa region have been striking in solidarity with the inhabitants of the Tambo Valley. The protesters have raised concerns about the negative consequences that the mining activities will have on the environment and agricultural activities in the region.

On August 12, the Peruvian Mining Council sent an official notice to the SCC, temporarily suspending the license granted for the construction of the mining project. However, the inhabitants of the valley rejected the government’s decision and demanded the definitive termination of the project.

The leaders, organizations and trade unions that are at the forefront of the struggle, have called for a macro-level regional strike on September 16 to demand the definitive cancellation of the project. The regional general strike will involve all the southern regions of the country, including Arequipa, Moquegua, Tacna, Puno, Cusco, Madre de Dios, Apurímac and Cajamarca. Additionally, on September 9, the grassroots organisations of the Arequipa region have called to carry out a struggle day and hold a sacrifice march to the capital city of Lima.