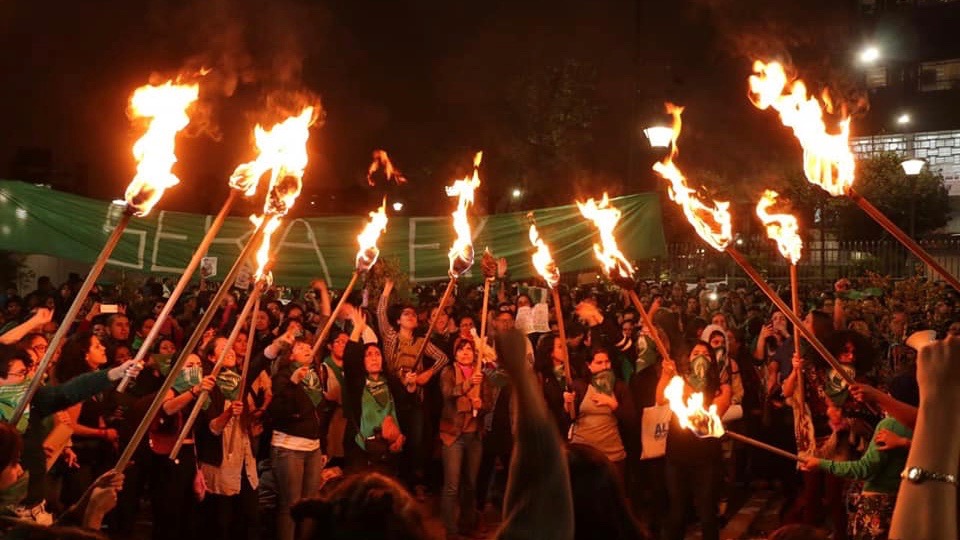 Feminist activists in Ecuador on Wednesday, September 18, staged protests in front of the National Assembly, a day after the proposal to reform the Comprehensive Organic Criminal Code (COIP) and decriminalize abortion in cases of rape, incest, statutory rape, and non-consensual insemination failed to pass. The proposal received 65 votes in favor (5 less than necessary), 59 against, and 6 abstentions in the National Assembly debate on reforms to the COIP.

At the protest, activists hung pictures of the 59 National Assembly members who voted in favor of the criminalization of women, adolescents and girls who have been raped and for obliging them to give birth.

The legislation on abortion in Ecuador, which has not been changed since 1938, dictates that it is illegal except in cases where the health or life of the mother is at risk, or if the pregnancy is the result of the rape of a woman with mental disability.

Hundreds of feminist activists mobilized outside the National Assembly in the capital Quito during the debate on September 17 to show their support for the reform. Activists held a “pañuelazo” and waved green scarves, which were first used in protests in Argentina and have become a symbol across the continent of the struggle for abortion rights. Their mobilization was repressed by the police who used tear gas and pepper spray at them while anti-rights activists held a religious ritual nearby led by priests.

Prior to the debate and voting on the reform, feminist organizations and social movements carried out campaigns online and with legislators to circulate information about the true impact of the criminalization of abortion on the country.

According to official statistics from the Ministry of Health, over 3,000 minors below the age of 15 are raped and impregnated every year and seven minors are forced to give birth every day. In 2018, 17 women died because of an unsafe or clandestine abortions. Currently, 435 women are criminalized for abortion. According to statistics from the Attorney General’s office, in the last three years, nearly 14,000 rapes were reported and of those, 700 of them were of girls under the age of 10 years.

Feminist activists have vowed that their struggle for the dignity, autonomy and freedom of women, girls and people of diverse genders is not over and they will continue to fight for legal, safe and free abortion and an end to machista violence.