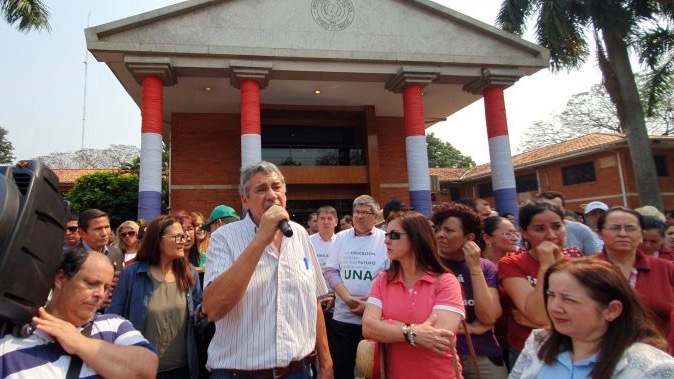 Professors gathered at the National University of Asunción before heading out to march. Photo: UNA

Professors in Paraguay’s National University of Asunción (UNA) have been on an indefinite strike since September 14 to demand a higher budget for the education sector and salary equalization. On September 17, more than 1,500 teachers from UNA took to the streets in Asunción, the capital of Paraguay as part of the strike. They marched to the Ministry of Finance in order to request that the ministry forward the budget change request to the National Congress which was agreed upon in a negotiation table made up of teachers’, executive and legislative representatives of the former President Horacio Cartes.

The teachers are demanding a budget increase from 28 billion to 56 billion guaranis. The amount was approved by the finance ministry, but has not yet been forwarded to the Congress for its approval. Teachers reported the salaries of most teachers and academic staff have not been increased from 10 to 12 years.

“If this equalization is achieved, between 10,000 to 15,000 teachers of the UNA would benefit. With a favorable response to the request, the measure of force will be lifted,” said Zully Vera, the vice-chancellor of the UNA.

This is the second indefinite strike by the teachers of the UNA this month. Earlier, the teachers had began the strike on September 2, which was lifted on September 6, after reaching an agreement with the finance ministry. However, the promise to forward the document to the Congress was not fulfilled and the teachers were forced to re-initiate the strike.