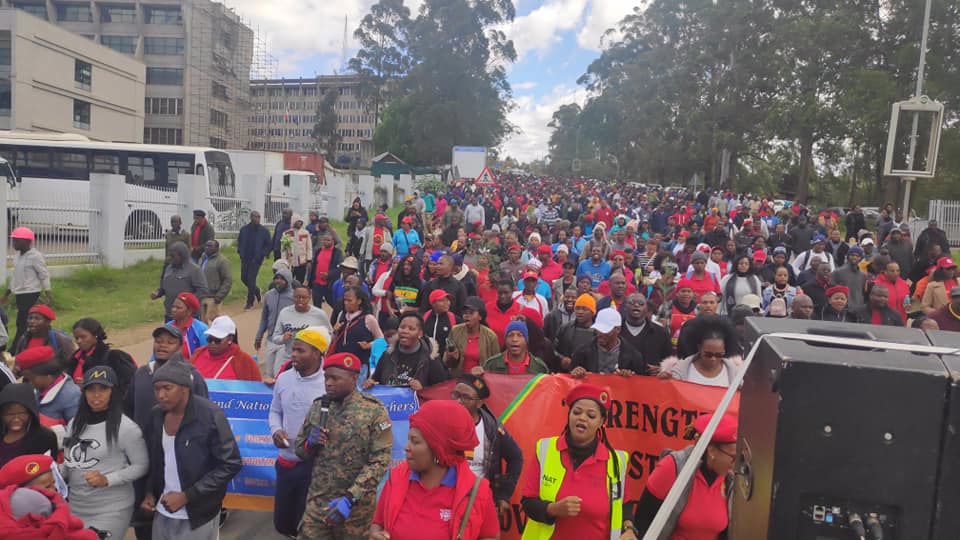 Civil Servants march in the capital city of Mbabane to demand a Cost of Living Adjustment.

Swaziland police opened fire at civil servants who, after travelling from across the country, had gathered in the capital city of Mbabane for a mass demonstration, on September 25. The massive mobilization had followed a two-day strike by teachers and other civil servants on September 23 and 24. Government employees have been demanding a Cost of Living Adjustment (CoLA) for their salary package, in order to restore its value lost amid rising prices.

At least 20 people, injured by rubber bullets, were treated in hospitals. Several others, fearing identification and subsequent police harassment, have gone into hiding with untreated wounds.

“I am still receiving calls from comrades who were shot by the police.. we are still making follow ups to see if there are [other] comrades who were injured,” Mcolisi Ngcamphala, an executive member of the Big Bend branch of the teachers’ union and the Deputy National Chairperson of Communist Party of Swaziland (CPS), told Peoples Dispatch.

Nevertheless, the demonstration, which brought together tens of thousands of aggrieved government employees from across the country, was a success. The civil servants submitted petitions demanding a CoLA of 7.85%, to offset the loss of their real incomes, to the ministry of education and training, the ministry of public service and the ministry of labor and social security.

Since 2016, while the prices, including that of basic commodities, have been on the rise, the wages of civil servants have remained stagnant. As a result, their real value has been reduced by almost 20%, according to the Public Sector Associations (PSAs), which is an umbrella organization of unions of civil servants employed in different sectors by the government.

However, the government of Swaziland, a proxy appointed by King Mswati III, the last absolute monarch in Africa reigning above the law, maintains that it cannot provide the wage-hike to its employees due to economic difficulties.

The civil servants’ unions have pointed to the millions of dollars wasted on the fleet of cars, innumerable foreign shopping trips, over a dozen palaces, grand celebrations and other indulgences of the royal family. They remain unconvinced by the government’s reasoning and have asked it to cut costs elsewhere.

“Every time we engage on this matter, [the] government, our employer, always conveniently cites the economic challenges that the country is said to be facing. It is unfortunate that these economic challenges only arise when there is the issue of the CoLA to be discussed.. [But] your administration has continued to spend in a manner that suggests the opposite of what you are saying regarding the economy,” reads another petition addressed to the prime minister.

The striking PSAs include the Swaziland National Association of Teachers (SNAT), which counts as its members around 14,000 of the roughly 15,000 teachers employed in government schools and colleges.

The teachers’ and their associations have been cast a villain by the government, on the grounds that their strike affects the education of students enrolled in government schools and colleges.

However, the Swaziland National Union of Students (SNUS), which itself is engaged in a struggle against the government’s downsizing of scholarships and students allowances, has declared “full solidarity and support” to the striking civil servants.

“One thing we are sure about is that the ordinary citizens, (workers, students, unemployed) are not responsible for the collapse in the economy, so why must we suffer? How long must we sit idle and languish while those in authority live lavishly?” SNUS president Mlamuli Gumedze, said in a statement

The Swaziland National Association of Government Accounting Personnel (SNAGAP), which has as its members 500 of the roughly 800 government accountants, and the more than 7,600 members-strong National Public Services and Allied Workers Union (NAPSAWU) also participated in the two-day industrial action that preceded yesterday’s mass-demonstration at Mbabane.

The strike affected the processing of payments in the government offices, the revenue collection department, the central transport administration, immigration offices etc., because civil servants in these offices were among those who downed tools.

Nurses working in government hospitals have also raised their voice to demand CoLA. They are, on the one hand, finding it increasingly difficult to make ends meet on their meager wages, and on the other, struggling to provide adequate care to the patients in hospitals that are running out of food, medication, equipment and protective clothing due to severe under-funding.

One of the lowest ranked countries in terms of respect for labor rights, strikes and demonstrations around labor disputes in the country are frequently met with police repression.

A history of violent suppression of labor agitations

During the three-day civil servants strike in September 2018, when their demand was for a CoLA of 6.5%, the workers’ demonstrations were confronted by the government security forces with “stun grenades, teargas, teasers and rubber bullets”, turning the site into what the Swazi Observer called “a warzone”.

A few months later, while the government was still refusing to move an inch from its 0% offer, civil servants were prepared for another strike on January 27, knowing fully well that violence will be unleashed on them again. The government had already threatened them with suspension and fines that were well over twice the monthly wage of the lowest earning civil servants.

However, when the unions were unfazed by the threats, the government, at the last moment, moved the industrial court, which interdicted the strike hours before it was scheduled to begin. The reasoning given by the court was that the government’s case claiming that the strike action was political in nature, must first be heard.

In a country where political parties are banned, and political activities are often charged under the Suppression of Terrorism Act, deeming a strike as “political” is an easy way for the monarchical government to have the court declare any industrial action as illegal.

After the hearing dragged on for six months, the court, whose top jurists are appointed by the king, had to finally admit that the demands behind the strike action are “legitimate”, and not of a “purely political nature”.

Asking the unions to file fresh strike notices, the court eventually gave the unions a go-ahead. However, an exception was made in the case of nurses, who, on account of practicing an ‘essential service’, are obliged to report to duty, even though the hospitals are running out of medicines and other equipment needed to treat the patients.

This verdict, however, did not completely clear the path for the other unions to organize the strike-action. Until the last moment, the government attempted a number of intimidation tactics. The prime minister, also an appointee of the King, accused the teachers’ union of being sponsored, and of inviting other people who were not a party to the dispute to participate.

Through a number of such statements, the government implied that the strike action was illegal. Unfazed, the SNAT insisted that the “legal” strike would go ahead as scheduled, and demanded that the prime minister prove his allegations.

It was only on the day the industrial action was set to begin that the minister of education and training issued a statement permitting the teachers to strike. This, by the minister’s own admission, was after being “advised by the Attorney General’s Office to reconsider our stance as a ministry with regard to the strike”.

On being asked about the reason behind this change of stance, the minister, according to the SNAT, said, “It is true that the government has been issuing a number of threats to teachers with regard to the strike; however, as a country we respect the rule of law. We don’t want to see ourselves in the Special Paragraph at ILO again.”

However, the ministry also issued attendance forms to educational institutions in order to monitor who does not report to duty, so that ‘No Work No Pay’ policy could be applied to the striking teachers.

“Teachers are caught in a catch 22 situation whereby on one hand they are allowed to participate in the PSAs strike while on the other they are shackled by the issuance of attendance forms at their respective schools. Why is an executive arm of government interfering with a strike that was declared lawful by the judiciary?”, asked the Swaziland Coalition of Concerned Civic Organizations (SCCCO).

Its statement further added, “The system is so used to repressing people’s rights to freedom of expression that its agents cannot see when they are tripping all over themselves with these “safeguards” against collective action.”

Nevertheless, having already declared that they would not be deterred by the application of the no work no pay policy, the teachers associated with the SNAT, along with other civil servants, went ahead with strike action.

Addressing the workers at a vigil held at the SNAT center in the city of Manzini one night before the demonstration, CPS national chairperson Dumisani Fakudze, drew cheers from the workers when he challenged the monarchical system saying, “We second a new democratic order in Swaziland. We need a Conference for democracy.”