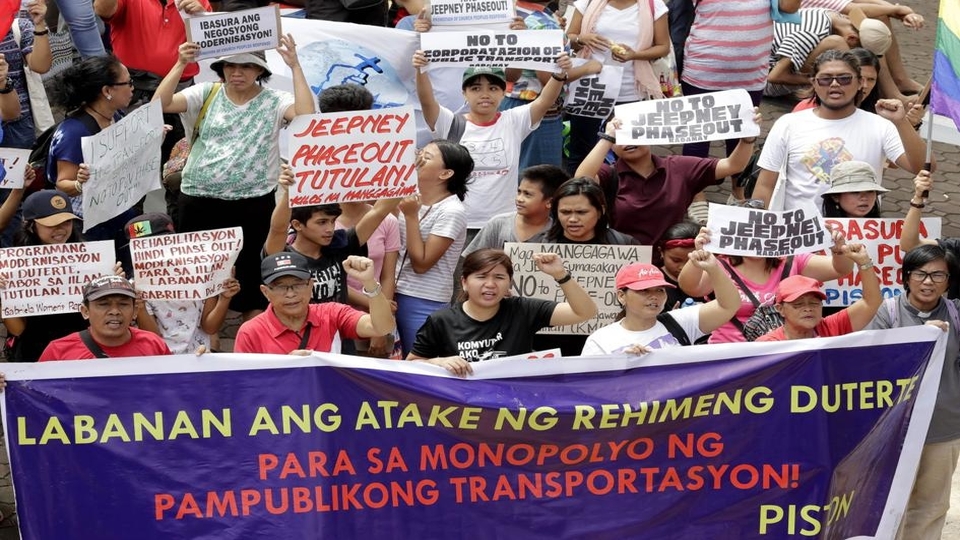 A two-day countrywide strike was held on September 30 and October 1 by a coalition of public transport workers in the Philippines. The strike was in response to the government’s push for the ‘modernization’ of public utility vehicles. The policy, first proposed by the Rodrigo Duterte-led government in 2016, has received a boost recently, after the national budget was passed by the Congress following months of deadlock. The workers are angry at having to bear the bulk of the cost of modernization. They have said that hundreds of thousands of workers will lose their jobs if the drive is implemented. However, the government, instead of listening to their concerns, has cancelled the licenses of protesters.

The two-day strike, in which hundreds of thousands transport workers took part, virtually brought the country to a halt.

They workers are organized under the banner of Alyansa Laban sa PUV Phaseout (Alliance Against PUV Phaseout), representing a coalition of trade unions and workers movements.  Prominent among them are PISTON (Pinagkaisang Samahan ng mga Tsuper at Operator Nationwide), the May First Labor Movement (KMU), the Alliance of Concerned Transport Organizations (ACTO) and Stop & Go. The strike is also being supported by the left-wing progressive group, Bagong Alyansang Makabayan or Bayan.

Transport workers are agitated with the government for its decision to phase out public utility vehicles (PUVs) that have been in use for 15 years or more, in order to replace them with modern environment-friendly units by July 2020. The move is supposedly intended to bring down pollution levels and vehicular traffic in major cities in the country. The government also intends to roll out a program for the digitization of payments, in order to keep track of the income earned by each driver.

The final deadline for entire project is July 1, 2020. So far, only a small fraction of the PUVs have been replaced. The total budget allotted for the program is 2.2 billion pesos (USD 42 million). The modernization cost would be anywhere between 1 million to 1.6 million pesos (USD 19,300 to USD 30,800) per vehicle. However, the government is only ready to subsidize 80,000 pesos through the provision of a partial credit system, called the hulugan system. Most of the sanctioned budget will be utilized for this loan-based scheme, wherein a daily installment will be deducted from the beneficiary worker’s pay through a digitized system overseen by the government.

With no other subsidy plan or funds available, the drivers will have to shoulder nearly the entire cost of vehicles’ replacement. The government has also refused to accept the significantly cheaper alternatives being suggested, like the replacement of parts, such as polluting engines, instead of discarding the entire vehicle to bring down emissions.

The move has particularly affected owners of the Philippines’ ubiquitous ‘jeepneys’, a mix between a minivan and a minibus used as shared taxi. More than 180,000 privately-owned jeepneys are to be replaced, according to the Land Transportation Franchising and Regulation Board (LTFRB), which gives out licenses and franchises for the vehicles to operate on designated routes and areas.

The other group expected to bear the brunt of this decision is van owners who run large-capacity taxis. They also hold UV Express licenses issued by the LTFRB. Close to 80,000 UV Express vehicles are to be replaced with the new vehicles mandated by the government.

Apart from individual PUV licensees, franchise-holders will also be hit. As they must own a minimum of 20 jeepneys to run a franchise, the added costs of replacement for such operators will be over 30 million pesos (USD 578,000).

Workers unions have also disputed the figures given by the government. Groups like PISTON have estimated that despite the prohibitive costs, close to 350,000 vehicles are set to be taken off the roads. The KMU has also claimed that, in the long term, more than 600,000 small-time PUV drivers will be out of work, with close to 300,000 small operators’ livelihoods being wiped out .

Meanwhile, the government has refused to talk to the protesting drivers, despite the several demonstrations opposing modernization. The only response so far has been the cancellation of licenses of those who have participated in the protest. Earlier this month, at least 20 jeepney drivers had their licenses cancelled by the LTFRB for participating in a strike held in February, 2017.

The department of transport that oversees the functioning of the LTFRB has already been threatening the drivers in a bid to curb their mobilization. The department spokesperson has reportedly said that the licenses are a “privilege”, and that drivers are violating their “duty” by resorting to protest.

Workers, on the other hand, are unfazed by such threats. Most of them are anyway set to have their licenses cancelled by July 2020, if they are unable to bear the cost of vehicle replacement.

A joint statement released by PISTON and the KMU read, “Contrary to government’s claims, Duterte’s phase-out program, through the Department of Transportation’s (DOTr) Omnibus Franchising Guidelines, is not modernization, but an abandonment of its constitutional duty to provide a safe, efficient and affordable mass transport system as a public service. (..) Just as it did with other public services and utilities, Duterte is handing over our mass transport system to the monopoly control of profit greedy oligarchs and foreign big automotive corporations.”

Trade unions have rejected the claims made by the government that the move will lead to the reduction of the perennial traffic congestion faced by major cities like Manila and Davao. They have pointed to the fact that the jeepneys and the UV Express take up less than 2% of the road traffic. While the government is attempting to pit commuters against the public drivers, it is widely believed that the modernization and phasing out of public transport will affect the common people the most, who depend on the services of jeepneys and other small operators.

Several government officials have called the workers’ strike a failure despite the fact that all educational institutions and most government offices in all major cities across the Philippines had to be closed for two days. Unions, on the other hand, have called on the government to pay attention to the demands of the drivers, instead of remaining in a state of denial.

Speaking to the media, Renato Reyes, general-secretary of Bayan, said that the government “fails to grasp that the biggest sacrifice today is done by the drivers who will not earn any income because they joined the protest. In every strike, it is the striking worker who makes the greatest sacrifice.”