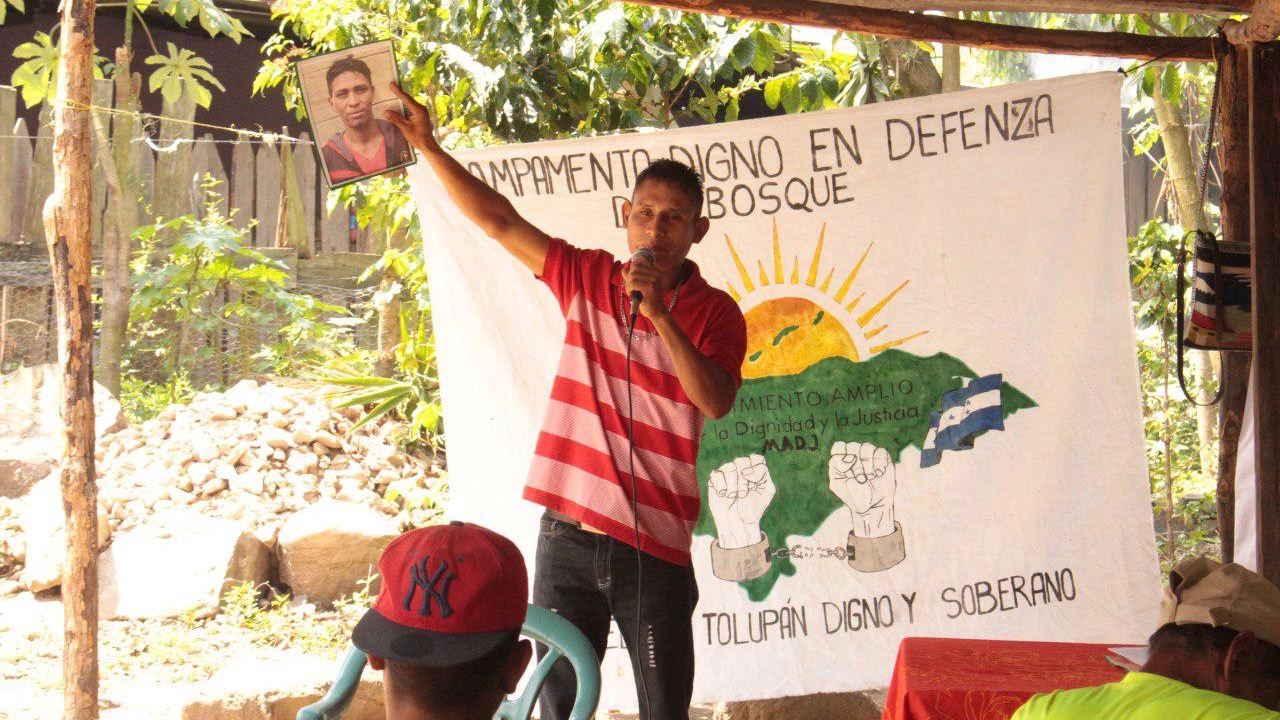 Milgen Idán Soto Ávila 29 years old, holds up a picture of his cousin Samael Matute assassinated in February 2019 because of his struggle in defense of the territory and ancestral forest.

Social movements in Honduras are mourning the assassination of Milgen Idán Soto Ávila, a 29-year-old member of the Tolupán Indigenous community and of the Broad Movement for Dignity and Justice (MADJ) in Honduras. According to MADJ, Milgen had been reported as disappeared four days before his body was found buried at the worksite of the logging company he was fighting against on September 28.

Milgen and other members of the Tolupán tribe of San Francisco Locomapa in the Yoro department of Honduras have been actively engaged in a campaign of resistance against the pillaging of pine wood, and the forest management plans in their territory since 2009.

In February 2018, the community began a peaceful camp, called the ‘Dignified Camp for the Defense of the Forest and Tolupán Territory’ against the logging of the forest by the company INMARE, owned by businessman Wilder Domínguez. The community maintains that companies like INMARE have been enabled by the state of Honduras illegally and illegitimately.

Honduras is a signatory to Convention 169 of the ILO which states that companies that wish to pursue extractive projects in Indigenous territories must carry out a prior, free and informed consultation process with the community to gain their consent. INMARE and the other logging companies however never did carry carry out this consultation with the Tolupán community. Nonetheless, the Honduran state allowed them to proceed with the project. The community’s camp has blocked the trucks of the company that seek to pillage more than 16,000  cubic meters of wood without the tribe’s permission.

Throughout nearly 10 years of resistance to defend their forest from different companies and projects, the Tolupán tribe of San Francisco Locomapa which has been accompanied by MADJ, has faced harsh repression and violence by state and illegal actors.

On August 25, 2013, Tolupan community members Armando Fúnez Medina, Ricardo Soto Fúnez and María Enriqueta Matute were assassinated while they were carrying out a peaceful land occupation. On April 5, 2015, Tolupán community member Luis de Reyes Marcía was assassinated. He and his family had left the territory for six months due to constant threats to their physical safety and had just returned in February 2015. On July 18, 2015, Tolupán leader Erasio Vieda Ponce was assassinated. Ponce was a key leader in the community’s struggle.

Since the ‘Dignified Camp’ began in February 2018, the threats, persecution and violence have only gotten worse. The participants of the camp have been threatened throughout by police and employees of the company with arrest and incarceration if they do not end their protest. The physical violence has also seen a sharp increase. On February 25, 2019, José Salomón Matute and his son, Juan Samael Matute, members of the Tolupán community and of MADJ, were assassinated while they were planting beans in their land. José Salomón was a central leader in the defense of the community’s autonomy and territory and had faced many threats and constant physical and verbal aggression.

Milgen, who was murdered last week, was related to the Matutes and had been fighting for justice and an end to impunity for those responsible for killing his family members. He had also taken up the task of providing security to Ramón Matute, a relative of José Salomón and Juan Samael, who has received death threats. Milgen also assumed a leadership role in the camp in recent months and had been part of political education and consciousness raising activities. He had received threats and was subject to a legal denouncement by the company owner Domínguez.

While the Honduran justice system has not made any progress in finding those responsible for the assassination of the Tolupán people, it has taken steps to criminalize the defenders of the forest. Nine members of the Tolupán community in Yoro were accused by the Prosecutor’s Office in June 2019 of “blocking the development of a plan of forest management”. The case against them is based on a denouncement made by the company’s owner Domínguez.

MADJ released a statement denouncing Milgen’s death and the constant violence inflicted upon the Tolupán: “In response to the non-stop agony suffered by our Tolupán brothers and sisters, we must ask ourselves again: how many more assassinations does the public prosecutor of Yoro need to stop the violent deaths of Indigenous people in San Francisco Locomapa? This relationship that exists between the public prosecutor’s office and private and corrupt companies translates to the historical experience of impunity in the indigenous territories, the acquiescence of the apparatus of justice is in the end responsible for the persecution, criminalization and systematic assassinations.”

Honduras was deemed by Global Witness as one of the most unsafe countries for environmental defenders in 2017 and continues to be so today.