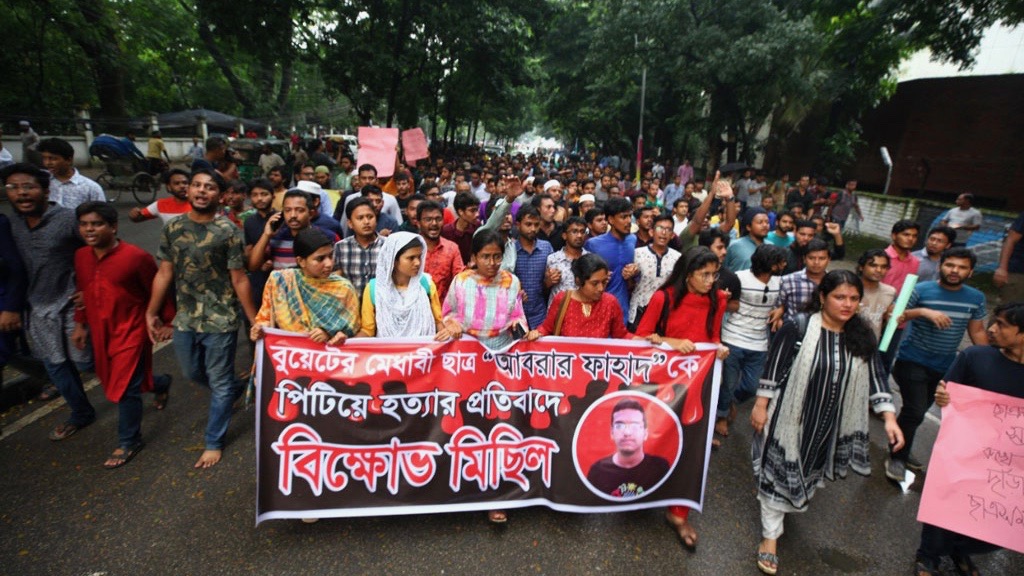 On October 7, students associated with the Progressive Students Alliance, a left-leaning organization, took out a protest march in Dhaka University demanding the punishment of those involved in the murder of a fellow student. 21-year-old Abrar Fahad, a second-year engineering student of the Bangladesh University of Engineering and Technology, was found dead at the Sher-e-Bangla hall on October 6. Protesting students accused members of the Bangladesh Chhatra League (the students’ wing of the ruling Awami League) of murdering Fahad. Just days earlier, Fahad had posted comments on Facebook that were critical of the government.

Doctors at the Dhaka Medical College Hospital in their autopsy stated that he died following internal bleeding and excessive pain. Protesters alleged that Chhatra League activists had murdered him due to their intolerance of his political views and his sympathies for a Muslim students’ organization. Fahad had criticized Bangladesh’s water sharing agreement with India.  (India and Bangladesh signed agreements on October 5, which would allow the former to withdraw 1.82 cusecs of water from the Feni river).

The incident reminded many of the violence perpetrated by Chhatra League activists when a massive student agitation rocked Bangladesh last year. The agitation was sparked off by the death of students in a traffic accident. During those protests, it was alleged that Chhatra League activists were in the forefront of assaulting students who were expressing their anger at the government.

Two Bangladesh Chhatra League leaders, Mehedi Hasan Rasel and Muttakim Fuad, were detained for their role in the death of Abrar. However, protesters claimed many more leaders of the organization were involved.

“My son was just an innocent student. He had his own strong opinions and he was killed for that,” Fahad’s father, Barkat Ullah, told reporters.