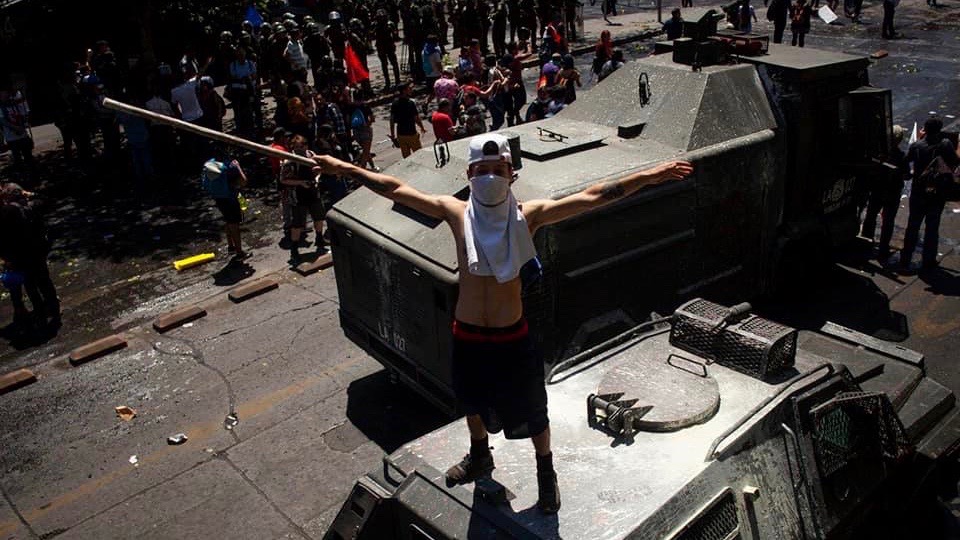 For the past several days, tens of thousands of Chileans have taken to the streets across the country to reject the economic measures imposed by the right-wing government of President Sebastian Piñera, all forms of repression of social protests and to demand the immediate withdrawal of the state of emergency and curfews declared in different regions of the country.

In Santiago, thousands of students, workers and social leaders gathered at the Plaza Italia and peacefully marched along the Santa Rosa street, banging pots and pans and honks. Similar massive mobilizations were held in Concepcion, Valparaiso, and other main cities of the country.

The mobilizations were carried out as a part of the 2-day general strike called for by the Coalition of Social Unity to demand the immediate resignation of the president. The Coalition of Social Unity is a platform that brings together more than 50 national social movements, students’ organizations and trade unions, including the Workers’ United Center (CUT), the National Association of Fiscal Employees (ANEF), etc.

The Social Unity Board holds Piñera responsible for “dragging the country into a serious confrontation” and pointed out that “declaring the state of emergency has deepened a social and governance crisis unprecedented in the history of Chile.”

The platform denounced the deployment of military, facilitated by the state of emergency. The social movements and organizations pointed out that the military had not patrolled the streets of Chile since the last civic-military dictatorship under Augusto Pinochet.

The protesting sectors are demanding that the Senators and members of parliament support them, carry out a legislative strike, do not pass any bill nor ratify any international treaties.

They are also demanding to establish a National Constituent Assembly in order to develop, in a participatory way, a new structural base for the Chilean society, and thereby “open the way to a national development model, which ends the current unfair and abusive neoliberal model.”

Since last Friday, October 18, Chileans have been mobilizing in different parts of the country against the neoliberal austerity measures promoted by Pinera’s administration and in defense of their social and human rights. To which, the government has responded with heavy police repression and militarization of cities. The national police force, the Carabineros have been brutally repression the popular uprising with tear gas, pepper spray, water cannons, rubber pellets and even live bullets.

In the last six days of anti-government protests, according to the Chilean human rights authorities, during the police repression, over 22 people have been killed, more than 5,000 have been arrested, hundreds have been tortured and many have been raped by the national security forces. The unprecedented heavy handed response of the state and the brutality of soldiers and police officers has been characterized by some activists as a return to the time of the military dictatorship.

On October 23, students organizations denounced the illegal and arbitrary detention as well as the political prosecution of three young communist leaders. Valentina Miranda, spokesperson of the National Coordinator of Secondary Students of Chile (CONES), was arrested from inside a building in Santiago by the Carabineros while demonstrating peacefully. During her detention, the leader of the Communist Youth of Chile (JJCC), was beaten, insulted and sprayed pepper gas on her face. The same day, Pablo Ferrada, in charge of Higher Education of JJCC, and Anaís Pulgar, political secretary of the University of Santiago of the JJCC, were also detained and tortured.

However, despite the violent repression by national police and military forces, defying state of emergency and curfews, Chileans continue to resist. They are not ready to surrender to any attempts by the government to placate or curb their indignation. The current uprising was sparked by a high school students’ protest against the increase in the cost of public transportation services in the capital, but tapped into the broader social discontent in the country.

Across Latin America and the Caribbean, protests have been held in solidarity with the people of Chile and to denounce the brutal response of the Chilean state to the protests. Many have also pointed out the silence of the far-right governments in the region who were quick to speak out about the small-scale opposition protests in Venezuela and Bolivia but have done nothing to condemn the actions of Piñera’s government who is already responsible for the deaths of over 20 protesters.