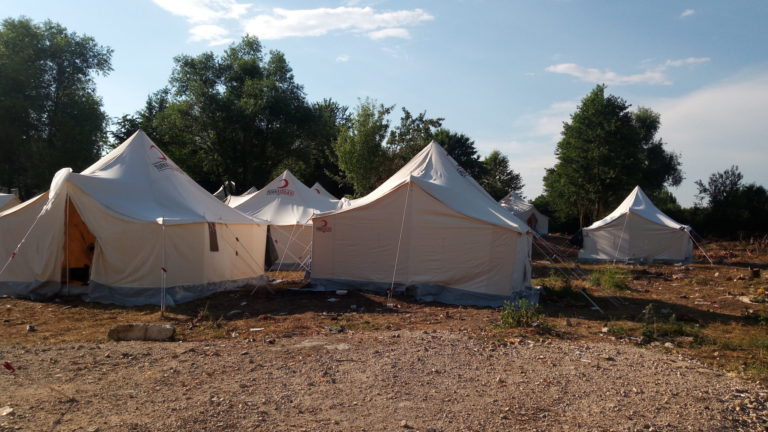 As the Balkan states await the winter storm, the living conditions of the refugees in the region is set to deteriorate further. The Vucjak camp, near Bihac in northern Bosnia-Herzegovina, was recently visited by Franziska Wallner and Klaudia Wieser from the editorial board of the Mosaik Blog, who accompanied the SOS Balkan Route donation convoy for refugees, from Austria to northern Bosnia-Herzegovina. The SOS Balkan Route convoy started on October 17. It comprised of several activists, associations, left parliamentarians and students, who believe in resisting the European border regime, in order to ensure basic human rights for the refugees on their way to Europe.

In a detailed blog post, Wallner and Wieser reported on the miserable conditions of the refugees they witnessed. According to them, refugees at the Vucjak camp are living in tents without mattresses, sanitation facilities and running water. Several camp inmates suffer from deteriorating health conditions but the local Red Cross has long been stretched beyond its capabilities. Many of the refugees were also harassed and beaten up by the border police en route, as border security is further tightened under the direction of the European Union (EU).

The LeftEast reports that the miserable condition of the refugees reflects the true impact of EU policies. The situation is no better in other camps, elsewhere in Bosnia-Herzegovina, or in other countries lying on the EU periphery. According to activists, the official camp at Bira, which is run by the International Organisation for Migration (IOM) with EU funding, closely resembles a prison. In addition, the conditions at these camps are bound to worsen with the onset of winter.

The north western border between Bosnia and Croatia has been a major transit point for thousands of migrants and refugees from West Asia and North Africa, trying to enter the EU states. The humanitarian crisis worsened along this Balkan route when, in 2018, the EU stipulated that no official accommodation may be granted to refugees in Bosnia within 30 kms of the Croatian border. However, many believe that a viable and humanitarian solution to this deepening crisis is the opening up of the border to the refugees.

Meanwhile, even though there have been several volunteer groups and individuals who support these refugees, many fear the rising state surveillance and the criminalization of those who support them.