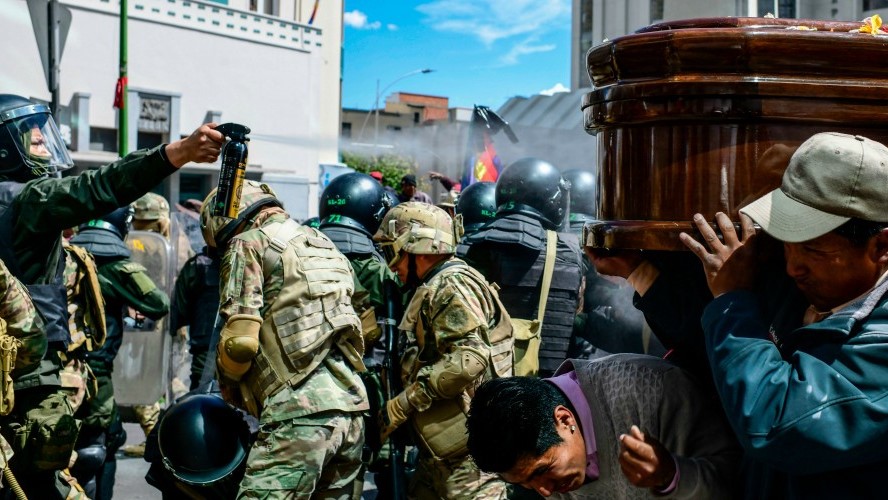 I am writing from Bolivia just days after witnessing the November 19 military massacre at the Senkata gas plant in the indigenous city of El Alto, and the tear-gassing of a peaceful funeral procession on November 21 to commemorate the dead. These are examples, unfortunately, of the modus operandi of the de facto government that seized control in a coup that forced Evo Morales out of power.

The coup has spawned massive protests, with blockades set up around the country as part of a national strike calling for the resignation of this new government. One well-organized blockade is in El Alto, where residents set up barriers surrounding the Senkata gas plant, stopping tankers from leaving the plant and cutting off La Paz’s main source of gasoline.

Determined to break the blockade, the government sent in helicopters, tanks and heavily armed soldiers in the evening of November 18. The next day, mayhem broke out when the soldiers began teargassing residents, then shooting into the crowd. I arrived just after the shooting. The furious residents took me to local clinics where the wounded were taken. I saw the doctors and nurses desperately trying to save lives, carrying out emergency surgeries in difficult conditions with a shortage of medical equipment. I saw five dead bodies and dozens of people with bullet wounds. Some had just been walking to work when they were struck by bullets. A grieving mother whose son was shot cried out between sobs: “They’re killing us like dogs.” In the end, there were eight confirmed dead.

The next day, a local church became an improvised morgue, with the dead bodies—some still dripping blood—lined up in pews and doctors performing autopsies. Hundreds gathered outside to console the families and contribute money for coffins and funerals. They mourned the dead, and cursed the government for the attack and the local press for refusing to tell the truth about what happened.

The local news coverage about Senkata was almost as startling as the lack of medical supplies. The de facto government has threatened journalists with sedition should they spread “disinformation” by covering protests, so many don’t even show up. Those who do often spread disinformation. The main TV station reported three deaths and blamed the violence on the protesters, giving airtime to the new Defense Minister Fernando Lopez who made the absurd claim that soldiers did not fire “a single bullet” and that “terrorist groups” had tried to use dynamite to break into the gasoline plant.

It’s little wonder that many Bolivians have no idea what is happening. I have interviewed and spoken to dozens of people on both sides of the political divide. Many of those who support the de facto government justify the repression as a way to restore stability. They refuse to call President Evo Morales’ ouster a coup and claim there was fraud in the October 20 election that sparked the conflict. These claims of fraud, which were prompted by a report by the Organization of American States, have been debunked by the Center for Economic and Policy Research, a think tank in Washington, D.C.

Morales, the first indigenous president in a country with an indigenous majority, was forced to flee to Mexico after he, his family and party leaders received death threats and attacks—including the burning of his sister’s house. Regardless of the criticisms people may have of Evo Morales, especially his decision to seek a fourth term, it is undeniable that he oversaw a growing economy that decreased poverty and inequality. He also brought relative stability to a country with a history of coups and upheavals. Perhaps most importantly, Morales was a symbol that the country’s indigenous majority could no longer be ignored. The de facto government has defaced indigenous symbols and insisted on the supremacy of Christianity and the Bible over indigenous traditions that the self-declared president, Jeanine Añez, has characterized as “satanic.” This surge in racism has not been lost on the indigenous protesters, who demand respect for their culture and traditions.

Jeanine Añez, who was the third highest ranking member of the Bolivian Senate, swore herself in as president after Morales’ resignation, despite not having a necessary quorum in the legislature to approve her as president. The people in front of her in the line of succession—all of whom belong to Morales’ MAS party—resigned under duress. One of those is Victor Borda, president of the lower house of congress, who stepped down after his home was set on fire and his brother was taken hostage.

“It is not hyperbole to suggest that this could result in a civil war.”

Upon taking power, Áñez’s government threatened to arrest MAS legislators, accusing them of “subversion and sedition,” despite the fact that this party holds a majority in both chambers of congress. The de facto government then received international condemnation after issuing a decree granting immunity to the military in its efforts to reestablish order and stability. This decree has been described as a “license to kill” and “carte blanche” to repress, and it has been strongly criticized by the Inter-American Commission on Human Rights.

The result of this decree has been death, repression and massive violations of human rights. In the week and a half since the coup, 32 people have died in protests, with more than 700 wounded. This conflict is spiraling out of control and I fear it will only get worse. Rumors abound on social media of military and police units refusing the de facto government’s orders to repress. It is not hyperbole to suggest that this could result in a civil war. That’s why so many Bolivians are desperately calling for international help. “The military has guns and a license to kill; we have nothing,” cried a mother whose son had just been shot in Senkata. “Please, tell the international community to come here and stop this.”

I have been calling for Michelle Bachelet, the United Nations High Commissioner for Human Rights and former president of Chile, to join me on the ground in Bolivia. Her office is sending a technical mission to Bolivia, but the situation requires a prominent figure. Restorative justice is needed for the victims of violence and dialogue is needed to defuse tensions so Bolivians can restore their democracy. Ms. Bachelet is highly respected in the region; her presence could help save lives and bring peace to Bolivia.

Medea Benjamin, co-founder of Global Exchange and CODEPINK: Women for Peace, is the author of the new book, Inside Iran: The Real History and Politics of the Islamic Republic of Iran. Her previous books include: Kingdom of the Unjust: Behind the U.S.-Saudi Connection; Drone Warfare: Killing by Remote Control; Don’t Be Afraid Gringo: A Honduran Woman Speaks from the Heart, and (with Jodie Evans) Stop the Next War Now (Inner Ocean Action Guide). Follow her on Twitter: @medeabenjamin