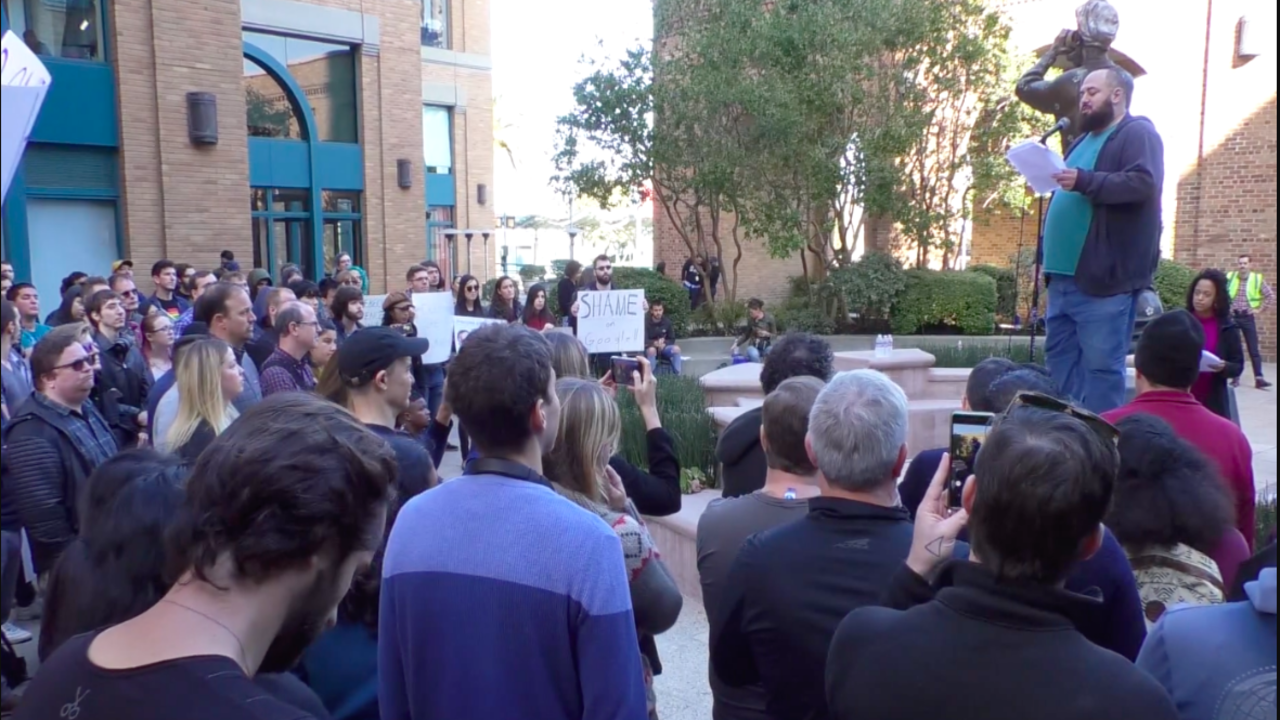 Google employees protest the earlier suspension of two of the four employees fired by the company. (Photo: Google Walkout for Real Change/Medium)

Google’s parent company Alphabet Inc. has fired four of its employees in what is being described as an attempt at “union busting”. The employees were involved in organizing the Google Walkout for Real Change last year, a campaign against the alleged sexual misconduct in the organization and its cover-up.

In a memo circulated among employees, Google confirmed that it has fired Rebecca Rivers and Laurence Berland, along with two other unnamed employees.

Rivers and Berland were under suspension since November 22 over charges of allegedly violating the company’s data security policies. The two have, however, denied leaking any sensitive data. They have claimed that the suspension was in retaliation for their involvement in organizing the Google Walkout campaign.

Following the suspension of Rivers and Berland, Google employees held a protest demonstration in their support. A demonstration also followed the recent dismissals that took effect on November 25.

Meanwhile, it was pointed out by the campaign that the company has recently radically changed its data security policy, effectively making it punishable to access or even “look” at certain documents despite them not being explicitly earmarked as classified or sensitive. This is when for years, Google employees were encouraged to read documents of other projects. The open policy was projected as a perk to help workers build and learn from existing databases and experience.

This change in policy was introduced as clandestinely as the hiring of IMI Consultants, a management consultancy infamous for union-busting. All this has invited accusations that the company is now actively undermining its own open workplace culture.

In a statement posted on their blog on Medium, Google Walkout also highlighted that even company officials had denied the accusations that the two fired employees were responsible for leaking any information or data. In fact, the exact nature of the violations they have been charged with is yet to be specified.

The Google Walkout for Real Change that was held in October 2018 had over 20,000 employees walk out of the workplace in protest against the company’s handling of sexual abuse cases. The protesters had raised the issue of forced arbitration and the lack of transparency in investigations of sexual misconduct.

Organizers and participants of this campaign have been targeted by Google in the past as well. In April, two of the organizers, Claire Stapleton and Meredith Whittaker, had complained of being victimized, which eventually led to the two resigning from their jobs between June and July.