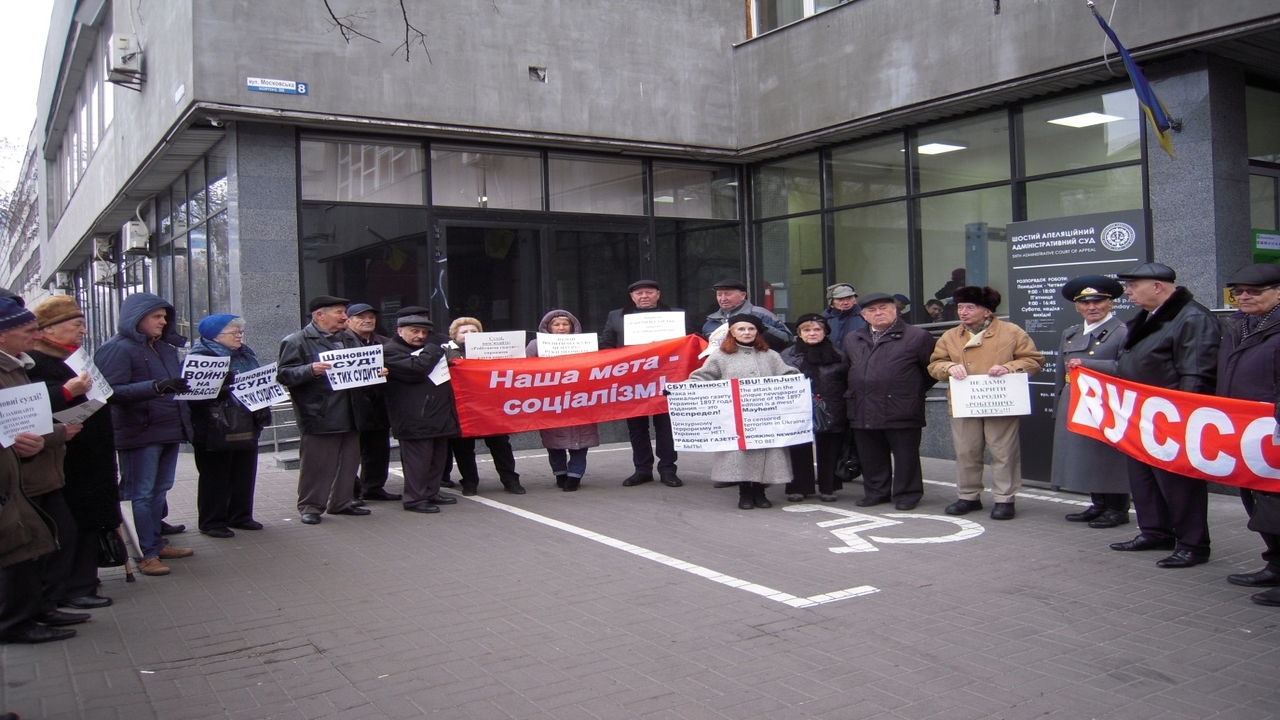 Protesters gather against the court decision to uphold the ban on pro-communist newspaper Rabochaya Gazeta.

On November 27, the Sixth Appeal Administrative Court in Ukraine upheld the August 19 ruling of the Kyiv District Court, banning the pro-communist newspaper Rabochaya Gazeta (Worker’s Newspaper). The judgement legitimizes the state-led purge of communists in the country.

On the day of the verdict, several KPU members and subscribers of Rabochaya Gazeta gathered in front of the appeal court with posters and displays to demonstrate support for the newspaper.

Founded in 1897, Rabochaya Gazeta was banned under Ukraine’s reactionary anti-communist laws after it published articles quoting Karl Marx and Lenin, along with a commentary praising the achievements of Ukraine during the Soviet period.

On Tuesday, December 3, the first secretary of the Komsomol of Ukraine, Mikhail Kononovich, while addressing the General Assembly of the World Federation of Democratic Youth (WFDY) in Nicosia, Cyprus, denounced the policy of terror and the persecution of communists and opposition media in Ukraine.

In its statement, the Communist Party of Ukraine (KPU) also condemned the court’s decision to uphold the ban. The party stated that the “political course of the new government had not changed, which holds continued hatred towards the newspaper for telling the truth to its readers.” KPU also added that the ban was a precursor to a more draconian future for Ukraine, where the authorities desire to “completely destroy freedom of speech and introduce total censorship of the media.”

Earlier, in  2015, the KPU had also been banned by a Kyiv court, under the instigation of the previous government led by Petro Poroshenko. It was banned for allegedly promoting separatism by backing the uprising in Donbas. Subsequently, widespread attacks on KPU offices and cadre were perpetrated by right-wing miscreants.

MEPs from the Communist Party of Greece (KKE) have raised the issue of the ban on the KPU and Rabochaya Gazeta in the European parliament. This is in a context when anti-communism has attained the status of a state doctrine in several post-USSR republics and east European countries. Communists in Poland are also facing severe persecution. Their publication, Brzazsk, has been heavily censored by the Polish government.

In the European parliament, a resolution equating communism to Nazism, and calling for the erasure of monuments glorifying these ideologies, particularly Soviet monuments from the EU member states, was passed by the liberal and center-right coalition members, in September.

Consequently, de-communization laws enacted in several east European countries have led to the demolishing of Soviet World War II memorials. Right-wing groups have been involved in the demolition and vandalizing of several such monuments in Ukraine, Moldova, Czech Republic, Estonia, and other states in the region.