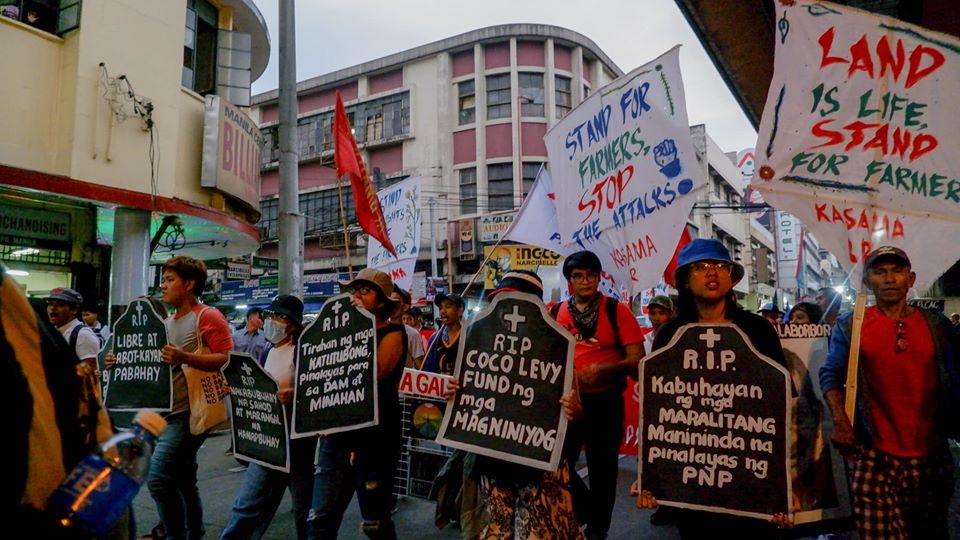 On Tuesday, December 10, thousands of Filipino trade unionists and activists mobilized in Manila, on the International Day for Human Rights, to call for an end to the targeting of working class and people’s movements in the Philippines. According to activists, since the government of Rodrigo Duterte came to power in 2016, the country’s police and military forces have launched a deliberate campaign against trade union activists who have been victim to a series of abductions and killings.

The protest that was organized by the human rights organization Karapatan, along with various other trade union organizations, was held at Liwasang Bonifacio, a central plaza in the capital. Protesters condemned the red-tagging of working-class organizations and movements by labeling them as underground armed group fronts, and demanded that the government allow the High-Level Tripartite Mission of the International Labor Organization (ILO) to visit the country and launch a probe regarding the extrajudicial killings of workers. According to reports, in the past three years, 43 workers have been killed by the police and security forces in the Philippines.

The protesters also demanded the lifting of martial law in Mindanao, an island in the south of the Philippines, which has been under military rule since May 2017.

Duterte’s campaign of repression against the unions

In October, police forces raided a building in Bacolod city, capital of the province of Negros Occidental, where a meeting of bus transport workers union was taking place. The raids also targeted the offices of the workers groups – the National Federation of Sugar Workers (NFSW) and the May First Labor Movement or Kilusang Mayo Uno (KMU), along with other progressive political parties like Bayan Muna, the GABRIELA Women’s Party and Karapatan, all of whom are constituents of the larger Makabayan coalition. 52 people were arrested and charged with the possession of illegal firearms. However, according to eyewitnesses, suspected non-uniformed policemen had entered the property and planted firearms to implicate the workers.

On March 30, 2019, 14 peasant activists were killed and 12 were arrested in a supposed weapons raid by the Philippines national police and the military in Negros province. The massacre was the deadliest act of mass murder by Filipino law enforcement agencies in recent history.

The crackdown on working-class struggles is part of the broader climate of government repression against the people of the Philippines. The ‘war on drugs’ launched by Duterte in 2016 has claimed the lives of more than 25,000 people, including numerous teenagers, at the hands of the security forces.

Duterte’s rise to power was based on a promise to ensure workers’ rights and an end to work contractualization, but once in power, he completely flipped. Not only were trade union activities were brutally targeted by his regime, he even shot down a bill to end contractualization.

Artists and cultural workers have also been targeted by Duterte’s regime. On November 30, four members of the cultural-artistic collective, Panday Sining, were arrested by police in Manila and accused of street vandalism. Panday Sining creates street art and graffiti with the aim of exposing the crimes of the Duterte government and expressing solidarity with the people’s struggles in the Philippines.

The artists’ arrest came soon after a march organized by various progressive organizations in the country to commemorate the 156th birth anniversary of the liberator of Philippines, Gat Andres Bonifacio.

On December 8, three members of the group were granted bail, while one was sent to a local social welfare department. The Manila city council also declared the members of Panday Sining persona non grata for painting protest graffiti around the city.

‘Hands off unions’ solidarity protests with the working class movements of the Philippines were also organized across the world on December 10. Protests were held in Geneva (Switzerland), Mauritius, Tunisia, New Zealand, Brazil, London (UK) and several other places against the abduction and killing of trade unionists and human rights defenders by the Duterte regime.

Global trade unions, like the Public Service International, Industriall, Building and Wood Workers’ International (BWI), Union Network International (UNI), among others, delivered a letter to the UN Ambassador for the Philippines expressing their rejection of the government crackdown on activists. They also demanded that the government allow the ILO committee to investigate cases of extrajudicial killings of workers in the country.