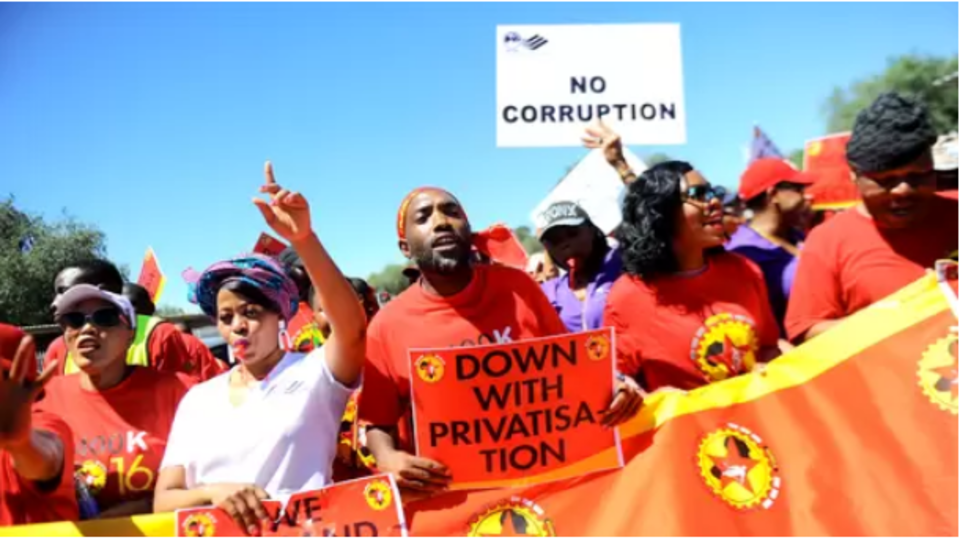 The Central Committee of the National Union of Metalworkers of South Africa (NUMSA) met on Wednesday, December 11, to discuss crucial labor disputes in the country. These include the dispute over wages and benefits in the motor industry, mass layoffs at ArcelorMittal, and the larger challenges before state-owned enterprises (SOEs) such as the South Africa Airways (SAA) and the power-production company Eskom.

Following the Central Committee meeting, which is expected to conclude today, NUMSA will take a decision on, among other issues, whether to accelerate the dispute in the motor industry, or accept the offer tabled by the employees’ representatives at the Motor Industries Bargaining Council (MIBCO) on December 4, and settle.

Negotiations at MIBCO between NUMSA and the three representative employer bodies – the National Employers Association of South Africa (NEASA), the Retail Motor Industry Organisation (RMI) and the Fuel Retailers Association (FRA) – have been taking place since June. The existing agreement in the sector expired on August 31.

The salary of the lowest paid workers in the motor industry has remained stagnant at R20 ($1.36) per hour since August 2016, when the now lapsed agreement was signed. The roughly 30% fuel price hike since then, along with the consequent rise in the prices of other basic commodities, has not been matched by a wage hike, chipping away at the workers’ purchasing power.

NUMSA has refused this offer on the grounds that it was conditional on the union accepting a “peace clause” in the agreement. As per this clause, NUMSA will not raise any further disputes throughout the three years covered under the agreement, in effect forfeiting its right to agitate for the other two crucial demands which the employers have refused to engage with. This includes a R600 monthly travel allowance and a separate allowance for night shifts, as mandated by the Basic Conditions of Employment Act (BCEA).

In a previous meeting at MIBCO on December 4, NUMSA said, “there is a settlement proposal which is on the table. Our members are currently debating and discussing this proposal in all regions.” It was mentioned that following the meeting of NUMSA’s leadership on December 13, the “CC will give a response to the settlement proposal which is on the table, and it will confirm whether to accept it or not.”

The struggle to rescue SAA continues

The CC is also expected to discuss the challenges faced by the financially stressed state-owned enterprises (SOEs) which the government reportedly seeks to privatize, South African Airlines (SAA) is one of these crucial state companies.

In November, NUMSA and the South African Cabin Crew Association (SACCA) led a seven-days strike at SAA, demanding the withdrawal of proposed layoffs that could potentially cut over 900 jobs, for which notices were served on November 11. Other major demands included wage hikes and the review of outsourced contracts to private companies which have been overcharging SAA, sucking the finances out of its coffers.

The strike came to an end only on November 22, after the management agreed to defer the layoff notices and pay a wage hike of 5.9%, along with tax-benefits in the form of an educational bursary for those earning less than R600,000 per year.

The management had also agreed to set up a task team to review the outsourced contracts. Following the identification of overpriced contracts, they were either to be renegotiated, cancelled or the workers under them brought in-house, in a bid to cut unjustified costs.

After reaching this agreement with the unions, following which the employees returned to work, the government, instead of working to implement this “turnaround plan”, took to blaming the unions.

In a statement after the industrial action was called off, the Department of Public Enterprises (DPE) claimed that “the strike initiated by NUMSA and SACCA caused immense damage to the reputation, operations and the deterioration of finances at SAA.”

In response, NUMSA in a statement on December 3, called this an “opportunistic attempt to deflect attention away from the reality” of the financial situation of the airline.

NUMSA pointed out, “Airline management was aware as early as June this year that there was not enough money for operational costs from November onwards. In the same week that we announced our plans to embark on strike action, on Monday the 11th of November 2019 the Acting CFO Deon Fredericks again confirmed that there was no money for salaries for the remainder of the year. Therefore, it is absurd in the extreme to blame the cash crisis on the strike when both the board and executive management were aware of the situation six months ago, but chose to do nothing.”

Further conflict emerged between the SAA board and the unions with regards to necessary steps to take to avoid the liquidation of the national carrier. After much back and forth, SAA’s board of directors decided to go ahead with a business rescue plan to rehabilitate the financially distressed company which is likely to be insolvent within six months, according to South Africa’s Company Act.

“We have noted their decision to suddenly undergo voluntary business rescue, after receiving our letter. However, we view their belated attempt at voluntary business rescue as insincere, and an attempt to retain control by the board. And this is why we are concerned. For too long, the actions of government, the shareholders and the board and executive management at SAA, has eroded the little trust which existed between workers and the employer,” NUMSA said.

“It is for this reason that we see no other option, except to proceed with Solidarity’s application, as we believe that this process, will be to the benefit of our members and workers in general at SAA.”

NUMSA had also requested to be “engaged and involved in choosing a competent and independent business rescue practitioner to be appointed to this process to work with the one chosen by DPE.” However, the appointment was made without any consultation with NUMSA.

Another crucial issue that is being discussed by the NUMSA leadership at the ongoing meeting is the shutting down of Saldanha Steel by ArcelorMittal, whose winding down began on November 14 and will be completed by the first quarter of 2020. ArcelorMittal plans to lay off 2,000 workers in South Africa.