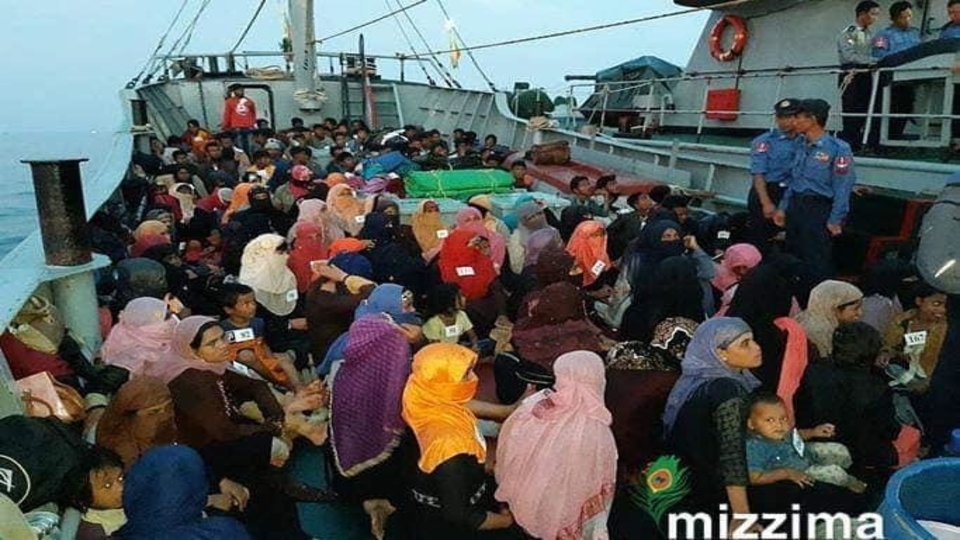 Rohingyas attempting to flee Myanmar arrested by the Myanmese navy.

Around 175 Rohingyas, including 69 women and 22 minors, were detained by the Myanmar navy on Sunday, December 15, after they attempted to flee the country by sea, fearing persecution. The navy personnel intercepted their boats while they were sailing in the Andaman Sea, after crossing around 150 miles west off the coast of Kawthaung town in the Thanintharya region.

Myanmar military’s spokesperson, brigadier general Zaw Min Tun, claimed that the navy had spotted the movement of a peculiar vessel on its radar. The military official stated that the civilians were detained for traveling illegally after initial interrogation showed that they planned to land in Malaysia, and had reached the location south of St. Martin Island in Bangladesh through a Bangladeshi middleman who had transported them on small boats through the first week of December.

The authorities informed reporters that they are yet to ascertain the whereabouts of their origin, whether they were moving from the Rakhine state, or the refugee camps in Bangladesh. Earlier on December 11, nearly 90 Rohingyas, including 23 minors, were forced to appear in a Myanmar court for traveling illegally, after being detained from the Irrawaddy delta region. 22 more Rohingyas were arrested on November 22 for attempting to escape from camps in Myanmar.

Since the state-sponsored persecution of Rohingyas began in Myanmar, thousands have attempted to flee the country, with many continuing to languish in different jails for attempting to travel illegally and on other pretexts.

The recent arrests come just a week after the de facto head of state, Aung San Suu Kyi, appeared at the International Court of Justice, defending the genocide charges leveled against her government in the Netherlands court. Her “statement of denial” was termed by human rights organizations, including Amnesty International, as “deceitful, and deliberately downplaying the scale of abuses and severity of the crimes committed against the Rohingya population.”

Since 2017, as many as 740,000 Rohingyas have fled the state of Myanmar after facing persecution at the hands of its military, led by commander-in-chief senior general Min Aung Hlaing. As per United Nations investigations, Myanmar’s security forces were involved in widespread theft, extortion, arbitrary arrests and forced labor, in addition to the ill-treatment and sexual violence perpetrated against the Rohingyas. All these grave crimes culminated in the mass executions of the Rohingyas by the Myanmar military and militias.

Many human rights organizations working for the cause of the Rohingya refugees have condemned the recent arrests, arguing that charging the already persecuted Rohingyas under immigration laws, and giving them long prison-terms, will amount to a violation of their right to free movement.

Those Rohingyas who are living inside Rakhine state also continue to face repeated harassment due to the lack of documentation which puts them in a vulnerable position. “600,000 still in Rakhine State are at risk of further crimes and urgently need protection.” Amnesty has reported.

Bangladesh authorities claim that between the months of November and March, when the sea remains calm, their patrols stop around one or two boats every week around Myanmar’s shores carrying Rohingyas who are again risking their lives and fleeing Myanmar in order to reach Malaysia and Indonesia. The dangerous sea route to Thailand and Malaysia has previously claimed many Rohingya lives, especially in 2015, when thousands tried to cross the Andaman sea and drowned because of overloaded boats.