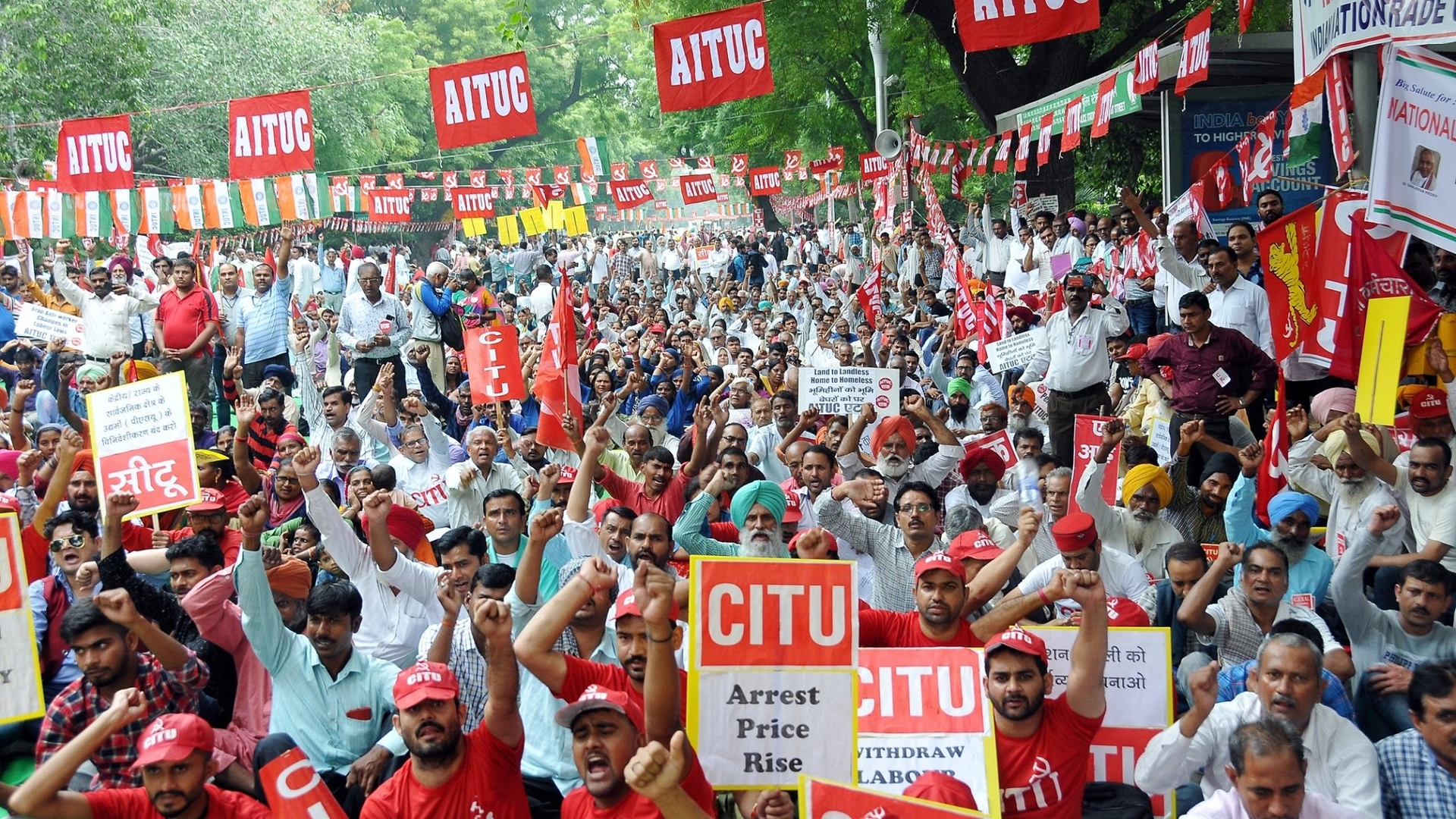 Workers at a national convention on labor in India on September 20, 2019.

With the global economic growth this year at its slowest pace since the financial crisis of 2007-08, capitalist countries across the world are scrambling to protect the wealth of big corporations by shifting the burden on to the working class.

On the one hand, massive financial concessions have been doled out to capitalists, while on the other, workers’ wages and benefits have been cut. Increasing contractualization and mass retrenchments, cutting down of social security through austerity policies etc, are ubiquitously deployed around the world to extract more from the working class.

But no less ubiquitous has been the fierce resistance put up by the working class, with a record number of strike actions, protests and militant street actions being witnessed across the world this year.

Renowned Marxist economist Prabhat Patnaik describes the current crisis of capitalism as “systemic, as distinct from a cyclical or sporadic one”. Such a systemic crisis, he argues, cannot be resolved “within the broad confines of the system, defined in terms of its prevailing class configuration”.

However, as governments have been unable or unwilling to transcend the compulsions placed on them by capitalism, it falls on the workers to perform this historic task. In this, the workers have responded in unison, across the globe. Yet, still more organization and workers’ unity is the call of the hour.

In the United States, the world’s capitalist metropole, the Labor Bureau has reported that the number of workers who participated in work-stoppages in 2019 was the highest since 1986.  Monthly data (up to November) shows that a total of 575,900 workers participated in strike actions this year. The total number of workdays lost to strike action is 3.12 million, the highest since 2005.

From teachers to workers in automotive industries and mines, strikes broke out in all key sectors in the US. A major victory for the working class has been in the gig economy, where organizing of workers has traditionally been tougher. Drivers of firms such as Uber and Lyft organized strike actions in May this year. The state government of California was forced to pass landmark legislation in September, forcing “gig economy corporates like Uber, Lyft and DoorDash to not only recategorize their workers but also grant various entitlements to nearly a million workers. In October, another historic victory was scored by teachers in Chicago, after 30,000 of them went on a strike action, which secured “the single biggest hike in spending on public education, of any school districts in the US in recent memory.”

Across the Atlantic, in the UK, firefighters, ferry workers, dockworkers, refuse collection workers, goods vehicles driving examiners and numerous others have struck work in this one month alone, protesting against the downsizing of staff, overtime work, reduction in real wages and social security.

The striking workers from a broad cross section of professions are also protesting the government’s plan to overhaul the pension system, which would result in millions of workers losing benefits. Numerous youth groups and student organizations, with the support of left political parties, held massive demonstrations across the country in December.

In Germany, after the successful 48-hour strike action by the cabin crew members of Lufthansa airline in early November, grounding about 1,500 flights, the union has now called for a three-day strike from December 30, after the management refused to concede the employees’ demands.

In Greece, a militant workers’ movement has held out against the conservative government, which came to power with the crumbling of SYRIZA. The government’s attempts to privatize the key sectors of the economy, to withdraw social security benefits and dismantle the laws protecting unions have all been met with fierce resistance from the workers organized under left trade unions.

To bury neoliberalism in its birthplace

Workers’ resistance to neoliberalism has gone a full circle, and is now determined to bury it in its very birthplace: Chile.

First unveiled here in the 1970s under the dictatorship of general Augusto Pinochet, Chileans have suffered neoliberalism’s deprivations for the longest period. The further intensification of their travails due to the increased austerity policies of the right-wing government of president Sebastián Piñera proved to be the proverbial “last straw”.

The general strike last month brought 90% of the public sector and more than 60% of the private sector to a halt. The hundreds of thousands of Chileans who have been taking militant actions on the streets for over three months now are determined to put a decisive end to the system of neoliberal capitalism in the country itself.

Another country in Latin America that has been ravaged by neoliberalism and militarization, Colombia, saw trade unions working together with people’s movements and Indigenous organizations to stage a series of strikes that challenged not only the government of Ivan Duque but the system he represents. These organizations were not only demanding an end to the wave of neoliberal reforms but also the security of the country’s social leaders who have been relentlessly attacked and persecuted. They were also demanding that the government honor the peace agreements it had signed with FARC and continue negotiations with the ELN.

In Ecuador, trade unions were once again in the forefront of agitating against the betrayal of Lenin Moreno, whose government went all out in initiating austerity measures and cosying up to the US. The massive protests in February and July culminated in the historic protests in October against Moreno’s paquetazo that not only forced him to withdraw these brutal reforms but destroyed his credibility and left him as a lame duck president.

The largest ever strike

The impact of neoliberal policies in the capitalist countries of the global south has been much more existentially felt by the masses. In India, unemployment levels have reached a 45-year high of almost 10%. Even as workers’ wages were driven to the ground and the price of essentials soared, corporations have been resorting to mass retrenchments on the one hand and buying out state-owned enterprises in strategic sectors.

The Indian government, led by the far-right BJP, is in the process of passing laws which dilute the labor laws and union rights, make it easier for the business owners to pay below the minimum wage and hire and fire at will.

Each step has been strongly resisted by the working class, who took to the streets in protest. On January 8 2020, the country’s working class is set to respond to this with a general strike. Earlier this year. a similar general strike saw about 200 million workers down tools, making it perhaps the largest industrial action in human history. Also joining them in a historic alliance will be left-wing farmers’ unions and associations of agricultural workers, strengthening the alliance forged in September last year during the first ever joint march held in India’s capital.

In South Africa, an unemployment rate of close to 30% has left little demand in the domestic economy for private companies to accumulate profits by expanding production. The government is coming to their aid through attempts to unbundle and privatize Eskom, the state-owned electricity production company, and the South African Airways (SAA). While the government is concealing this agenda under the garb of “rescue plans” for the financially-stressed State-Owned Enterprises, the resistance from unions has stopped the government from succeeding so far.

Arguing that outsourcing of contracts at overpriced rates to private companies is the main reason behind the financial stress of SOEs, the unions at SAA went on a week-long strike action last month, grounding most of it flights. Finally, the management agreed to set up a task force to review contracts. This militant strike action not only deferred the retrenchments which could have seen over 900 jobs axed, but also holds the promise of saving millions of dollars for SAA each year.

Revolutionary upsurges in the ‘weakest links’

Labor struggles in the periphery of the world economy – the “weakest links” in the capitalist chain – have seen revolutionary upsurges. In Sudan, the uprising sparked due to soaring bread prices in December 2018 quickly snowballed into a mass movement which toppled the dictator Omar al-Bashir. The military junta which assumed power was also forced to make way for a transitional government. At the forefront of these demonstrations was the Sudanese Professionals Association (SPA) – an umbrella organization of trade unions banned under Bashir’s regime, brought together with the support of the Sudanese Communist Party (SCP).

In Swaziland, ruled by the last absolute monarch in the continent, the left trade unions are increasingly associating the bread and butter issues of the workers with the existence of a monarchical system in the country. This monarchy has not been able to pay even the public servants hired to serve its puppet government. Since 2016, the public servants have not received a pay hike, while the prices have been soaring. It is this section of the working class – teachers, nurses, accountants, transport workers and industrial workers employed in the public sector owned by the state – which is well organized by the left trade unions in the country.

In Zimbabwe also, it is the public servants employed by the government who are putting up the fiercest resistance to the rightward shift of the economy under the rule of Emerson Mngagwa. Here too, the policy of further appeasing the finance capital with the hope of securing investment has exacerbated the crisis. The government has shifted the burden on to the working class by reducing their purchasing power through currency manipulation. It has also cracked down severely on any kind of resistance. Despite the brutal police actions, systematic abduction and torture of trade unionists, the unions have continued to put up an unyielding resistance. The longest strike this year has been that of the government doctors, who have downed tools since September 3, citing incapacitation. 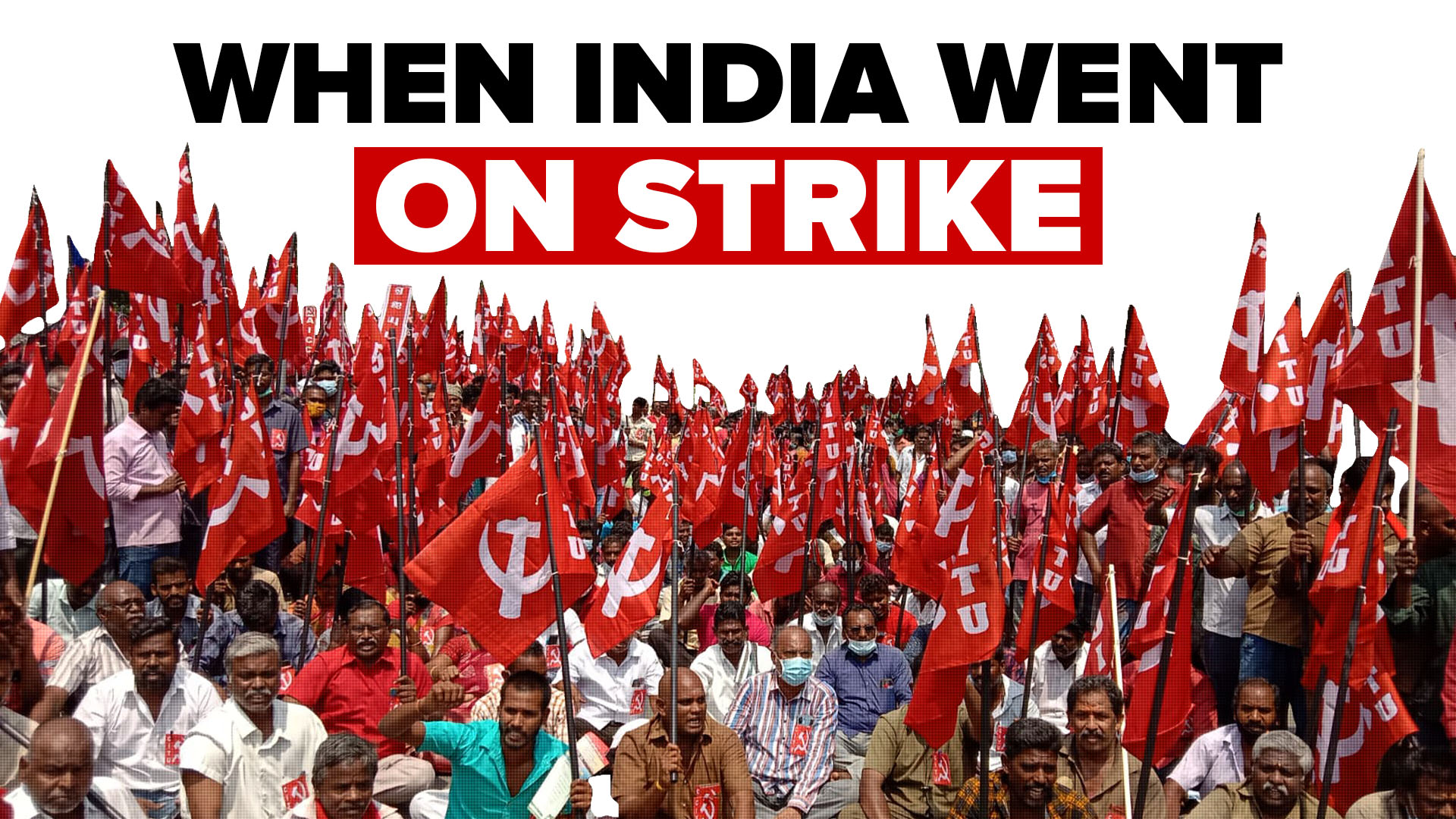