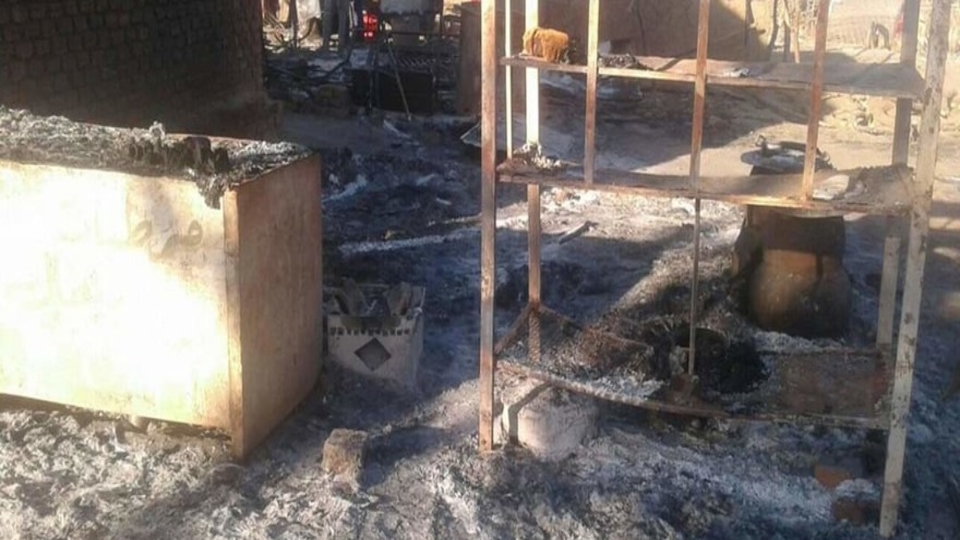 The scene at the Kerending camp after the violence on Sunday.

Peace negotiations between Sudan’s transitional government and the armed rebel groups under the umbrella of the Sudanese Revolutionary Front (SRF) have been put on hold temporarily after violent clashes in West Darfur between Arab tribesmen and displaced people of Masalit ethnicity in refugee camps. At least eight are reported to be dead and several others injured. Many have gone missing.

The government announced a 24-hour halt to negotiations on Monday. The SRF, which blamed the government for failing in its “duty to protect unarmed civilians and provide security”, has said that it will not resume negotiations until a proper investigation is conducted and the guilty punished.

The violence began in El-Geneina, the capital of West Darfur state, at a market near the Kerending refugee camp where Internally Displaced Persons (IDPs) of the Masalit community have been living.

The violence was sparked by a clash on Sunday evening between an Arab herdsman and an IDP from the camp, in which the former was stabbed to death. Soon, all hell broke when his relatives arrived and opened heavy fire in the course of which the market was burned down.

The Arab herdsmen then reportedly attacked Kerending camp 1 and Kerending camp 2 and burned them down, according to a statement by the General Coordination of Darfur Displaced People and Refugees. Radio Dabanga also reported that according to the statement, the attackers were “wearing military uniforms, and riding in Land Cruisers mounted with heavy weapons.”

The resistance committees set up at neighborhood levels, which formed the backbone of the Sudanese revolution, called the incident “a setback that undermines the goals of the revolution: Freedom, Peace, and Justice”. All the armed rebel groups in Darfur have condemned the attack.

Security forces from all armed bodies have been dispatched to the region, as have the Rapid Support Forces (RSF), a militia which was responsible for genocide in the region during the rule of the ousted president Omar al-Bashir.

Only one day before the violence, on Saturday, an important agreement was signed between the government and four armed groups active in Darfur at South Sudan’s capital city of Juba. The region lying in the west of the country has seen a bloody civil war since 2003.

The deal was part of negotiations between the transitional government of Sudan and the four armed groups – Gibril Ibrahim’s faction of the Justice and Equality Movement (JEM),  the Sudan Liberation Forces Alliance, Minni Minnawi’s faction of the Sudan Liberation Movement (SLM) and the SLM Transitional Council. These groups constitute the Sudanese Revolutionary Front (SRF). However, the talks are being boycotted by a section of the SLM led by Abdel Wahid al-Nur, who has called for comprehensive peace negotiations to be held within Sudan.

Saturday’s agreement sets out the contentious issues to be discussed during the negotiation process. Among them is the nature of administration in the region during the transitional period, the power-sharing arrangements at the state and regional levels and the mechanisms for sharing natural resource wealth. Some of the more difficult questions to be resolved include the issue of land ownership and the return of internally displaced people and refugees. Justice for the victims of the genocidal violence perpetrated under the ousted regime of Omar al-Bashir also remains a highly contentious issue.

The fighting in Darfur began in 2003, when rebel groups representing the ethnic minorities in the region, who felt discriminated and marginalized by a government dominated by the Arab majority, took up arms against the state.

The state, under the rule of former president al-Bashir, responded with mass killings, rapes, and the decimation of entire villages whose population was suspected of supporting the rebels. It is estimated that at least 300,000 people were killed. Over 2.5 million were displaced in the conflict.

Many of the refugees, now staying in UN-aided camps, cannot return to their lands which are now largely occupied by pastoralists of Arab origin. In this regard, restitution of land ownership to those dispossessed or displaced due to the violence will be a difficult process, and may lead to tensions erupting on both sides.

Meanwhile, refugees who have suffered violence, and witnessed the killings and rapes of their family members, have been protesting the talks taking place in Juba, insisting that al-Bashir be handed over to the International Criminal Court (ICC), which has found him guilty of genocide, war crimes and crimes against humanity.

However, this demand has been opposed by members of the transitional government appointed by the former military junta which briefly ruled Sudan after mass-demonstrations deposed al-Bashir in April 2019. These members are insisting on al-Bashir’s trial being held within the country. It is widely believed that an internal trial in Sudan will be far from just, nor will it be conducted fairly.