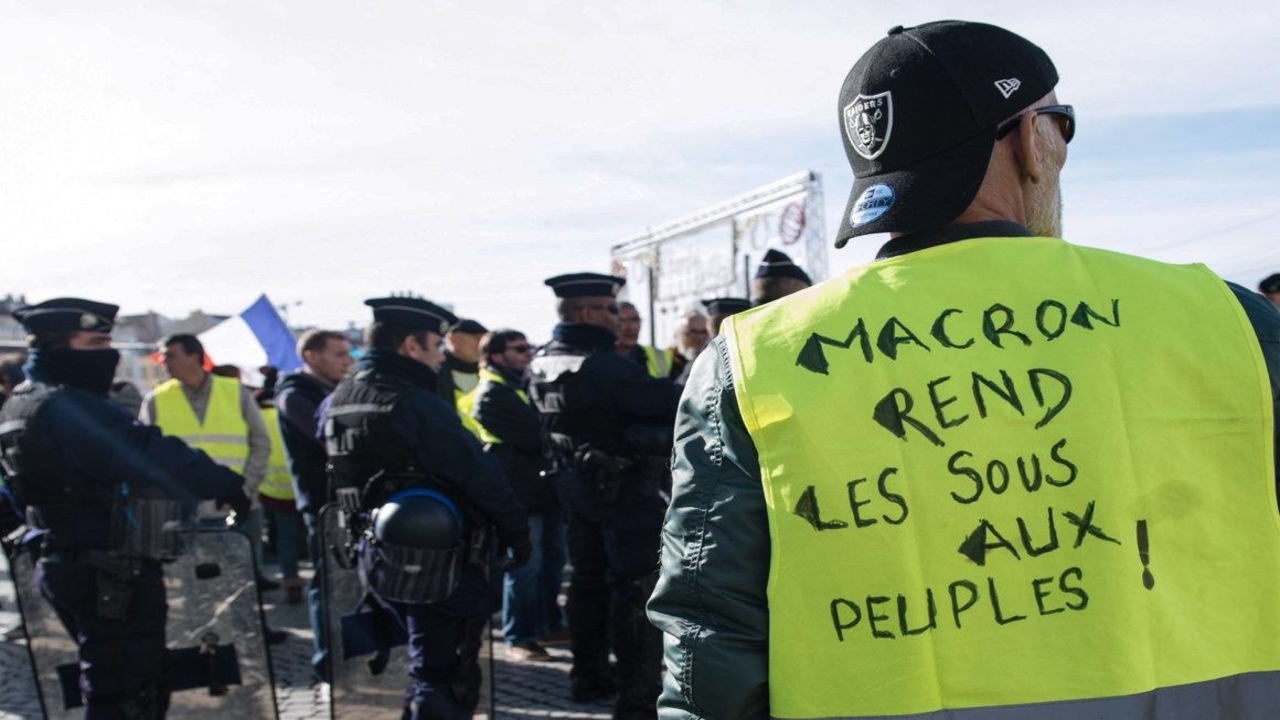 A Yellow Vests protester. The slogan on his vest says. "Macron, return the money to the people."

The Yellow Vests movement began on November 17, 2018, against a hike in fuel taxes, with hundreds of thousands of people taking part at its peak. It observed its first anniversary on November 16, 2019 with lesser numbers.

The movement which drew hundreds of thousands of people in the initial months, gradually weakened. French president Emmanuel Macron, who was on the backfoot in the early months of the protest, made a comeback. Though failing to oust Macron, it should be noted that the Yellow Vests have managed to channelize the latent anger in French society against the austerity policies of the government. They have also won certain sectoral victories, including the rolling back of the carbon tax.

Nicolas Maury, a blogger at Perspective Communiste, writes on the strengths, weaknesses and future of the Yellow Vests.

The strength of the Yellow Vests movement was above all, its ability to put forward social demands, in particular, around issues of wages (salary and pension levels), social justice claims (reinstatement of the tax on fortune, abolition of the Tax credit for employment and competitiveness (CICE) ) and finally participation (Citizen Initiative Referendum “RIC”). A majority of these demands are those of a population that no longer mobilizes, is no longer in the unions, and which is strongly affected by neoliberal policies against what is called the “middle class.”

For almost half of the Vests (47%), this is their first mobilization. Only 44% have participated in a strike. It is thus about participants with little experience of any collective action.

When talking about the social composition of the Yellow Vests, some categories appear to be particularly over-represented. This is the case with employees, who make up 33% of participants (versus 27% of the French workforce). They are more than twice as numerous as the workers, who represent 14% of the participants. Artisans, traders and entrepreneurs are also particularly numerous: 10.5% of participants (6.5% of the French workforce).

On the other hand, the intermediate professions and managers are not well represented: the former account for 10% of participants (26% of the French workforce); the latter are barely 5% of the participants (18% of the French working population) in the processions and blockades that took place between November 24th and December 1st 2018. A quarter of the participants in the Yellow Vests movement are in the “inactive” category – for the most part, they are retired.

The percentage of men (54%) is slightly more than that of women (45%). However, a high proportion of women belong to sections that traditionally did not mobilize politically. On the other hand, they are more visible here. There are several reasons for this: without an official spokesperson, union and political representatives, who are usually men, and in the absence of structures, the media often turns its attention to “ordinary” participants. The strong social dimension of the conflict and the focus of the demands on the material conditions of existence in the social movement also contributed to the visibility of women.

Some 55% of Yellow Vests report being taxable (a proportion almost identical to the general population) and 85% report owning a car. The median income of the declared household is around 1,700 euros per month, about 30% less than the average median declared income of all households (2015 INSEE “Tax and Social Income” survey). The Yellow Vests are for the majority individuals with modest incomes. They do not belong to the most economically precarious categories: 10% of them declare having an income lower than 800 euros per month (against 519 euros for the 10% of the poorest French households).

Despite strong mobilizations, the Yellow Vests have declined due to several factors. These include the non-alignment with political parties and unions, change in strategies and heavy police repression. Faced with the rejection of political parties and unions, the Yellow Vests rejected any form of organization. They rejected any leaders that might emerge, or proclaim themselves as such. There have been names like Erci Drouet, Maxime Nicolle “Fly Rider” and Jerome Rodriguez but none of them have become recognized representatives of the movement.

The Yellow Vests also rejected any national structuring of the movement as they felt it could be manipulated and utilized for the benefit of political parties or people. This explains the low electoral weight of the lists called “Yellow Vests” in the European elections (0.54% for the first and 0.01% for the second list).

Yet locally, positive experiences have emerged between different coordinated groups and unions. In Commercy (Meuse), an assembly of Yellow Vests tried to develop an original model of organization by building “popular assemblies”. In Martigues (Bouches du Rhône), the junction between the Yellow Vests and the “Red Vests” (trade unions) made possible the convergence of slogans traditionally issued by the working class and those of the Yellow Vests. The CGT is the only trade union organization openly calling on people to participate in the actions of the Yellow Vests.

The Yellow Vests initially occupied the roundabouts, directly blocking the centers of mass consumption (commercial areas). According to the figures in the specialized magazine LSA, the total losses for super and hypermarkets for the weekend of November 17-24 2018 was around Euros 315 million. According to the ministry of the economy, the loss of global turnover recorded in supermarkets reached 35% on November 17 and 18% on November 24. But this occupation of the roundabouts – hitting the capitalists at the wallet- gave way to the Saturday demonstrations with considerable violence, especially in Paris, whose damage is estimated at several million euros, especially in wealthy neighborhoods on the Champs Elysees, a symbol of luxury reserved for a minority criticized by the Yellow Vests.

Police repression has weakened the movement. Since the term of François Hollande (Socialist Party), the use of police violence against any form of social movement has become a norm. Emmanuel Macron is no different.

His minister of interior, Christophe Castaner, has unleashed widespread repression with a view to both provoking violence and suppressing any rebellion. The police repression killed between 4 and 10 people, injured thousands and led to dozens suffering debilitating injuries, including the loss of a hand or an eye. Over 15,200 were arrested and nearly 1,000 people were imprisoned. On the other hand, only two police agents have been indicted for the violence.

Even with reduced numbers, the movement has been able to continue its weekly protests for over a year in France. And so, the movement of Yellow Vests (gilets jaunes) continues in France as an unsuccessful revolt of the “modest income” sections and those victimized by the neoliberal policies.