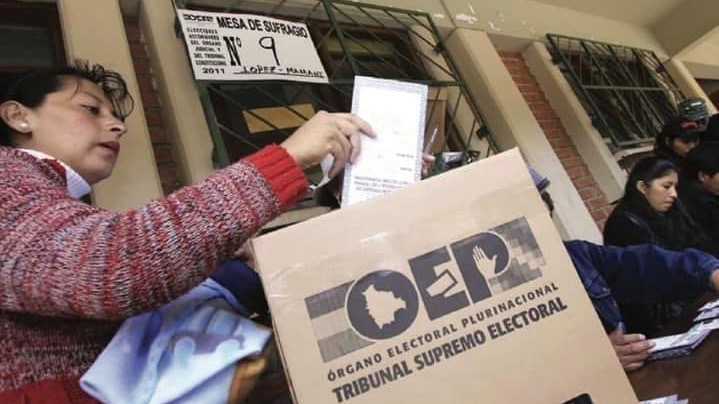 General elections in Bolivia were scheduled for May 3 and have been postponed without a concrete date.

The Supreme Electoral Court of Bolivia (TSE), on March 21, announced the suspension of the general elections scheduled for May 3 due to the COVID-19 pandemic. The TSE’s decision came hours after the de-facto regime led by far-right Jeanine Áñez, decreed a total quarantine for 14 days, starting on March 22, to prevent the spread of the novel coronavirus.

The president of the TSE, Salvador Romero, appointed by the coup-installed government, announced that the electoral body had also decided to suspend its work agenda for 14 days following the quarantine measure. “This measure, as a result of an unprecedented situation worldwide, prevents the electoral body from continuing to carry out preparatory tasks for the elections,” said Romero.

Romero clarified that the postponement of the elections and the selection of a new date would be approved by a law in the Plurinational Legislative Assembly.

Through an official statement, the TSE informed that it would resume its activities once the necessary conditions are met. “We ratify our will to continue the broad and pluralistic dialogue with all the political organizations participating in the 2020 process, as well as with the other powers of the State so that in a framework of agreement and unity of all Bolivians, we define a new date for the voting day for the 2020 general elections,” read the statement.

In Bolivia, there are 24 confirmed cases of the coronavirus disease, and like other countries worldwide it has adopted containment measures. Restrictions such as a stay-at-home order, a prohibition on gathering of large groups of people, a clampdown on domestic travel and a halt on international flights have been imposed nationwide.

However, the postponement of the elections has once again plunged the country into a new phase of political uncertainty. The country’s current government, led by Jeanine Áñez is illegitimate. She proclaimed herself president of Bolivia following the coup d’état on November 10 which forced democratically elected President Evo Morales of the Movement Towards Socialism (MAS) out of office. Since seizing power, Áñez has repeatedly promised that elections will be held and had continuously postponed them. While recognizing the necessity to prioritize the protection of the people at this time, many fear that the pandemic will allow the de-facto government to consolidate its power and further delay the return to democracy in Bolivia.

Furthermore, this electoral process has been marked by irregularities and violations against MAS leaders and members by the de-facto government. Since the coup, the selective persecution of MAS functionaries and social leaders has become normal practice. In February, the TSE barred Morales from participating in the elections and disqualified him as a candidate for senate, arguing that he did not meet the requirement of permanent residence in Bolivia. Morales denounced his disqualification as a “second coup” and a “blow to democracy.” Morales currently resides in Argentina as a political refugee as the de-facto regime has issued an arrest warrant for him on charges of sedition, terrorism and financing of terrorism.

In January, the de-facto government tried to impede the MAS presidential candidate Luis Arce’s participation in the elections by filing a false corruption case against him.

Nevertheless, despite the interim government’s desperate attempts, MAS has the support of the majority of Bolivians. According to several recent opinion polls, Luis Arce and his running mate David Choquehuanca are preferred candidates in the general elections.