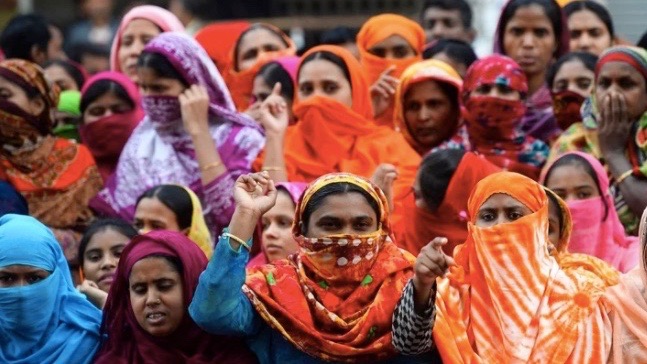 Hundreds of workers of MHC Apparels Ltd. in Bangladesh’s Gazipur district staged a sit-in protest demanding the disbursal of arrears for the last three months. All 1,900 workers who entered the factory refused to work and sat in the protest.

The workers claimed that they have not been paid arrears since February, and overtime dues since last August.

There are around 3,000 workers employed at the factory. The remaining workers could not report to work due to the COVID-19 lockdown imposed by the government.

Some of the protesting workers alleged that the company authorities had issued threats to them through local goons, warning them against protests. The management of the factory has however denied the claim. The management said that overtime dues are pending only from February and not from August.

According to Daily Star, the management later assured the workers that all remaining dues will be paid by May 13.

Bangladesh is the second largest exporter of readymade garments in the world. All the garment factories in the country were shut following the lockdown to contain the spread of COVID-19. However, around 2,600 garment factories of the total 7,602 have started operating since last week, after their managements agreed in a meeting with the government to follow strict physical distancing norms and install preventive and safety measures at the workplace.

Though some factories have adopted these measures to some extent, most have been found lax in their implementation, risking the lives of thousands of workers. A majority of the factories operate with limited space and in smaller locations, where it is difficult to maintain physical distancing norms.

Meanwhile, the number of COVID-19 cases is rising in Bangladesh, since the first case was reported on March 8. On May 2, the highest daily jump of 665 new cases was recorded. The total number of cases in the country as on May 5 stands at  9,455, with 177 deaths. Around 1,000 people have recovered so far.