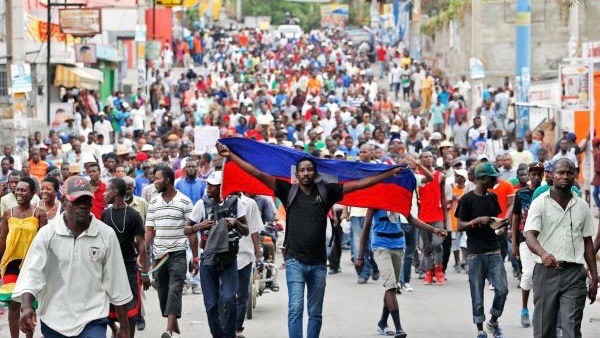 Hundreds of Haitians hit the streets of the capital Port-au-Prince demanding president Jovenel Moïse's resignation on May 18.

Despite the lockdown imposed due to the COVID-19 pandemic, on May 18, hundreds of Haitians took to the streets of the capital Port-au-Prince to demand the resignation of US-backed president Jovenel Moïse.

The call for the demonstration was given by the opposition and several social and progressive organizations on May 15. With the banner of “the Popular Awakening against the Government”, the organizations called on citizens to mobilize against the neoliberal government on the 217th anniversary of the creation of the Haitian national flag, which commemorates the slave revolt in Haiti that won the country’s independence from France.

The protesters gathered at the Champs-de-Mars, the capital’s main public square, and at the airport crossing on Delmas Avenue, and mobilized in the nearby areas. They denounced Moïse and his government for the mismanagement of health and economic emergencies caused by the novel coronavirus.

In just one week, the cases of coronavirus disease in the country doubled from 219 on May 10 to 456 on May 17. The rapid spread of the pandemic was one of the central reasons behind the fresh wave of anti-government protests. As of May 18, Haiti registered 533 confirmed cases of coronavirus infection and 21 deceased.

The protesters also denounced Moïse’s administration for the relentless corruption, the embezzlement of Venezuela’s Petrocaribe funds, the extreme scarcity of food that affects millions of Haitians, the prevailing chaos where various armed groups linked to different state officials spread terror in popular neighborhoods, among other issues.

In response, the national government once again resorted to violent police repression to stop the mobilizations. At both the locations, the Haitian National Police used tear gas and water cannons to disperse the crowd, injuring dozens of people. They even fired several bullets in the air and detained many protesters.

Social organizations denounced the police repression and the arrest of grassroots leaders, such as Guy Numa, the leader of the Popular and Democratic Movement and the spokesperson for Konbit, an organization that brings together many left-wing organizations in Haiti, among others.

In response to their illegal detention, activists and citizens organized another protest at the Delmas’ police headquarters to demand the immediate release of all detainees and an end to police repression. As a result of the public pressure, Numa and others were released after a few hours.

Since July 2018, Haitians have been tirelessly organizing and mobilizing against the widespread corruption in the political system, the imposition of neoliberal measures in accordance with the International Monetary Fund policies and the allegiance of the Haitian government to imperial interests. Last year, in the months of September and October, the people of Haiti led an impressive and massive movement against Moïse for plunging the country into a deep social, political and economic crisis.