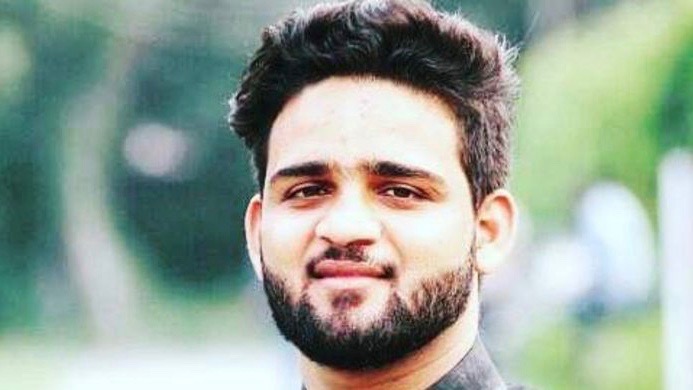 Student-activist Farhan Zuberi was arrested on May 28. (Photo: Facebook)

Two student-activists in India, Farhan Zuberi and Ravish Ali Khan, were apprehended by the police on May 28, Thursday. While Khan was released after six hours of questioning, Zuberi has been booked under at least 11 charges, including sedition and attempt to murder.

Both Zuberi and Khan are members of the Aligarh Muslim University Students Union and were part of the wide-scale anti-government protests registered in India earlier this year. It is widely believed that they have been arrested for challenging government policies and participating in the protests.

The two were traveling in a car when the police apprehended them at Madrak in the State of Uttar Pradesh. One of them also accused the police of throwing a barricade towards their car.

Zuberi’s family has claimed they were not informed by the police under which sections he had been booked. “It seems this government is punishing dissenters and all those voices criticizing or questioning them,” his brother said. Zuberi is pursuing a Masters in Social Work at the Aligarh Muslim University (AMU).

Amir Mintoee, another AMU student, was arrested earlier in April while he was assisting patients who were stuck at the Jawaharlal Nehru Medical College and Hospital in Aligarh.

Scores of student-activists in India have been arrested since last December, when popular protests swept major cities across the country following the introduction of the controversial Citizenship Amendment Act (CAA) and the proposed National Register of Citizens. Many students from Delhi’s Jamia Millia Islamia university, including activists Safoora Zargar and Meeran Haider, were also recently arrested. Several senior academics, lawyers and activists like Ishrat Jahan, Khalid Saifi and Gulfisha Fatima continue to be incarcerated. Reportedly, over 800 people were arrested in April in relation to the anti-government protests which had continued until the outbreak of COVID-19.

According to Mashkoor Ahmad Usmani, former president of the AMU Students Union, “Government is targeting leaders and activists based on their religious identities… be it Asif Tanha, Umar Khalid, Safoora Zargar. They want to terrorize the idea of dissent and want to make us learn that we will face the repercussions if we don’t bow down to their ideology or policies.”

The spree of arrests also comes at a time when the prospect of securing bail is difficult with the entire judiciary and legal system halted following the shutdown imposed due to the COVID-19 crisis.

Several activists have expressed that the ruling party in India wants to exploit the lockdown situation to its advantage and choke all dissenting voices opposing the anti-people policies of the far-right Hindu nationalist government. “The Delhi Police is framing student activists who raised their voice against CAA. Maybe they know that nothing will happen in court but they are making this process a punishment,” said Kavita Krishna of the All India Progressive Women’s Association on May 21.