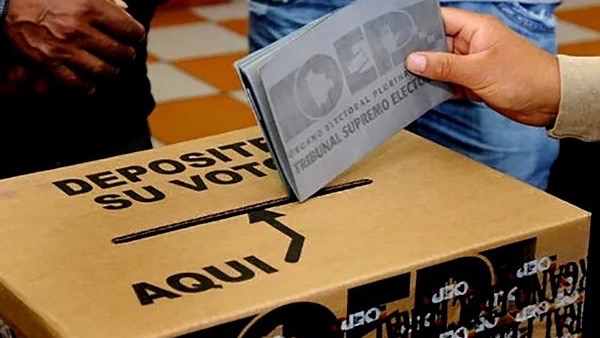 General elections in Bolivia, originally scheduled for May 3, have been postponed thrice since March. Photo: Twitter

Bolivia’s Supreme Electoral Court (TSE), on July 23, postponed the general elections scheduled for September 6 by more than a month, citing the COVID-19 pandemic. The elections will now be held on October 18. If necessary, a second round will take place on November 29. This is the third time that the presidential elections have been postponed in Bolivia in 2020.

The president of the TSE, Salvador Romero, claimed that the decision to delay the elections again was taken after medical experts warned that coronavirus infections would peak in late August or early September in the country.

However, the postponement of the elections was also a demand from certain political leaders as part of their strategy to buy time, such as Luis Fernando Camacho and Jorge Quiroga. Both were key leaders behind the violent civic-military coup against former president Evo Morales in November 2019.

The TSE is under the direct control of the coup-installed government led by Jeanine Áñez, who has sought to delay elections at every cost since she seized power in November following the coup. Social movements and organizations have criticized Áñez for clinging to power and delaying the return of democracy in Bolivia.

Morales and his party, the Movement Towards Socialism (MAS), rejected the decision and reminded that only Bolivia’s parliament has the authority to approve any change in the date.

“The laws 1297 and 1304 determine the time period for the elections to take place. The only state entity that can modify this period is the Plurinational Legislative Assembly. Any unilateral decision is illegal and unconstitutional,” wrote Morales in a tweet.

In another tweet, Morales denounced that “the de-facto government wants to buy more time to continue the persecution against social leaders and MAS candidates. That is another form of proscription. That’s why it doesn’t want elections on September 6.”

At the beginning of this week, on July 20, the alliance that supports the coup regime, Juntos, filed a lawsuit in the TSE to disqualify the MAS presidential candidate, Luis Arce, over an alleged violation of electoral laws. Camacho’s party, Creemos, threatened that it would demand the TSE to ban the MAS party from the upcoming elections and cancel its legal status for alleged electoral irregularities.

A few hours before the TSE announced its decision, Morales denounced on his Twitter account that “if the Supreme Electoral Court postpones the elections, it is another blow against democracy. The people have patiently endured two postponements. The aim is to extend the de-facto government.”

In another tweet, Morales pointed out that “a delay in the election date will only harm the people because of the ungovernability, the uncontrolled pandemic and the economic crisis.” Along with the tweet, he shared data from a recent survey, according to which 72% of the people consulted said that they are willing to attend the elections despite the pandemic.

Opinion polls on voters intention, carried out in the first quarter of the year, showed the MAS ticket of Arce and his running mate David Choquehuanca were the preferred candidates in the general elections. According to the most recent opinion polls, conducted by the Latin American Strategic Centre for Geopolitics (CELAG), Arce is poised to win the elections in the first-round.

The country’s polls had been originally scheduled for May 3, but were postponed on March 21 after the country went into lockdown following the coronavirus outbreak. On April 30, the president of the Plurinational Legislative Assembly of Bolivia, Eva Copa, promulgated a electoral law to hold elections between May 3 and August 2, using her special constitutional powers after Áñez rejected it.

On June 2, the TSE reached an agreement with all political parties and presidential candidates to further postpone the date and hold elections on September 6 due to the public health emergency. On June 9, both the chambers of Deputies and the Senate approved the bill setting September 6 as the new date. On June 21, Áñez enacted the law which established the date of September 6.

As of July 23, Bolivia has 65,252 confirmed cases of coronavirus and 2,407 deaths. The country’s public hospitals and other infrastructure have been completely overwhelmed. The residents of the working class district of K’ara K’ara in Cochabamba city have been mobilizing against Áñez’s mishandling of the health and economic emergencies caused by the pandemic since May 11. They are demanding Añez’s removal from office, calling for democratic elections in the country.