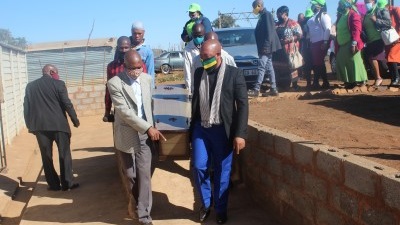 The funeral of Thabiso Mokhele was held on Wednesday.

Lehae la Basotho Workers Union, an organization of Lesotho diaspora, has demanded that the Lesotho government remove from office those posted in its High Commission in South Africa, Eye Witness News reported. This demand was made after the alleged hunger-death of Thabiso Mokhele near Johannesburg on Wednesday, August 6.

This demand was made on Wednesday, August 5, at the funeral of Thabiso Mokhele. The Lesotho national had died on July 26, allegedly due to starvation. His age is reportedly yet to be identified due to absence of identification papers, which he had to hand over to a previous landlord to whom he owed rent money.

At the time of his death, he was staying alone in a shack in the Waterworks shantytown. The owner of this shack had allowed him to use it for free. His neighbors said that he had been searching for food over the last few days before his death, but was unable to find any. Their multiple requests to the Lesotho High Commission for help allegedly got no response.

Finally, his frail dead body was found in the shack on July 26, by the side of a bucket into which he had vomited blood.

Speaking at his funeral, the organization’s president, Majorobela Masakale said, “We have written a letter to the government of Lesotho and we will take legal action in Lesotho to remove the officials. We are organizing a march to the high commission at the end of the month.” He also claimed that many more are in the same helpless state, while some are already in mortuary.

Lesotho, a tiny land-locked kingdom, with a population of just over two million, is surrounded on all sides by South Africa. Its economic dependence on South Africa is significant, with a high degree of migration in the search for livelihood. The remittances these migrants send back home to their families forms an important source of their economic survival.

Increasing unemployment rate in South Africa, which has now exceeded 30%, has also affected its smaller neighbours.

Migrants from these countries often live in some of the worst of the informal settlements in South Africa. Waterworks settlement, where Mokhele died, is one such shantytown to the west of Johannesburg, with a high proportion of migrant workers from foreign countries.

Until 12 years after the fall of apartheid and formation of the first ANC government, this settlement was not even connected to water supply. Only last month it was reported that there were plans to electrify the settlement.