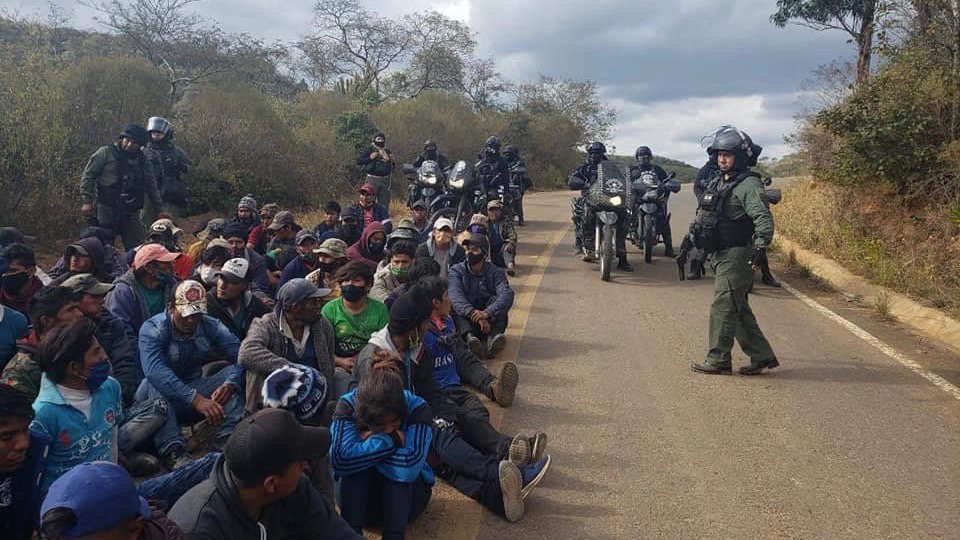 Bolivia's police arrested 60 rural workers in Samaipata, Santa Cruz, for protesting in favor of democratic elections. There are reports that pro-regime extremist groups assaulted many of them as well. Photo: Kawsachun News

The national strike and nationwide road blockades, called for by the Bolivian Workers’ Center (COB) against the postponement of general elections, have intensified across Bolivia. The number of interdepartmental and interprovincial highways and roads and interior streets in big cities blocked by citizens, to pressurize the coup-installed government to reverse its decision to delay the elections, increased from 24 to 140 within a week.

Social movements, trade unions, Indigenous and peasant organizations began the measures of protest last Monday, on August 3, to demand restoration of democracy and compliance with the decision to hold elections on the originally agreed date, September 6. Within the week, their demands also intensified. In addition to democratic elections, many people on the streets are also demanding the immediate resignation of the de-facto president, Jeanine Áñez.

Bolivia’s Supreme Electoral Court (TSE), which under Áñez’s direct control, on July 23, unilaterally rescheduled, for the third time, the country’s presidential and parliamentary elections to October 18, citing the health risk due to the COVID-19 pandemic. Former president Evo Morales and his party, the Movement Towards Socialism (MAS), denounced the decision as unconstitutional and illegal and reminded that only Bolivia’s parliament, the Plurinational Legislative Assembly, has the authority to approve any change in the date of the elections. Several organizations, associated with the MAS, also rejected the suspension and called to mobilize against the decision.

In the face of growing popular resistance, on August 8, Áñez called for a national political dialogue on August 9 to “confirm an election date and suspend the blockades”. However, most organizations opted not to participate, citing that their demands have been made clear and the regime has shown little will to negotiate as it continues to respond with force to the people’s peaceful protests.

In the early hours of August 9, Juan Carlos Huarachi, leader of COB, announced that the COB would not attend the meeting called by Áñez and reiterated their demand to hold the elections on September 6 and not in October. The decision was announced after the failure of a meeting between the COB leaders and the representatives of the de-facto government and of the TSE to find a solution to the social conflict, held on the night of August 8. Huarachi denounced that the de-facto government and the TSE did not want to negotiate but impose a date for the elections.

Meanwhile, the MAS presidential ticket, Luis Arce and his running mate, David Choquehuanca, in a press conference on the afternoon of August 8, said that they would accept an election date if the TSE gets it approved constitutionally and guarantees that it is definitive, fixed and immovable. They stressed that the election date must also be endorsed and sponsored by international organizations such as the UN.

In response to the pro-democracy protests, the coup-born regime has maintained its strategy of criminalizing the national mobilizations and blockades. It has accused the protesters for blocking the passage of ambulances and vehicles transporting medical supplies, despite numerous videos circulating on social media networks, which contradict the regime’s claims.

On August 10, the prosecutor from La Paz announced that a prosecution team was being formed to investigate Evo Morales, MAS presidential candidates, Luis Arce and David Choquehuanca, as well as secretary general of COB Huarachi, on charges of genocide and terrorism. The prosecutors argue that the road blockades have directly contributed to the death of people by COVID-19 as they have not let supplies and ambulances through, which has been disproved.

The regime and its right-wing allies have also threatened to attack the protesters. On August 4, the interior minister of the de-facto government, Arturo Murillo, threatened to deploy military forces to suppress protests if road blockades are not lifted. Following his announcement, some pro-regime terror groups also warned to attack protesters.

Yesterday, on August 9, at least 80 people were arrested for protesting in the Santa Cruz province. Additionally, in different parts of the departments of Santa Cruz and Cochabamba, the fascist paramilitary group, Resistencia Juvenil Cochala (RJC), assaulted several protesters.

Bolivian pro-coup terror group 'Resistencia Juvenil Cochala' have attacked pro-democracy protesters in Quillacollo, Cochabamba. They are armed, one is wearing a US military hat. pic.twitter.com/k7y35wyjX3

The same day, Luis Fernando Camacho, one of the key leaders behind the violent civic-military coup against Morales in November 2019, wrote an open letter, ordering the coup regime to take immediate actions against the blockades. He threatened that if the government fails, he would mobilize the violent right-wing extremists groups to restore order, beginning from today.

Earlier last week, on August 7, in an interview with Radio Kawsachun Coca, Morales warned that Bolivia’s military is planning another coup to strengthen its power, through the establishment of a civilian-military government. Through his twitter account he denounced that recently the military received two new fighter aircrafts from the US and that snipers were sent to El Alto and Chapare to act against the people maintaining road blockades.

Former president Morales has stressed that dialogue is the only way to resolve the socio-political crisis in the country. “The Legislative Assembly, the TSE and social movements are called to seek dialogue, [it is] the only possible way to resolve the tension in Bolivia before lives are lost due to the action of shock groups of the de- facto government,” wrote Morales in a tweet.

In another tweet, he urged the protesters to ponder the options and choose wisely. “Bolivia is going through difficult times. The leaders and mobilizing social movements must choose responsibly between the resignation of Áñez, which will further postpone our return to democracy, or prompt elections with the guarantee of the United Nations,” tweeted Morales.