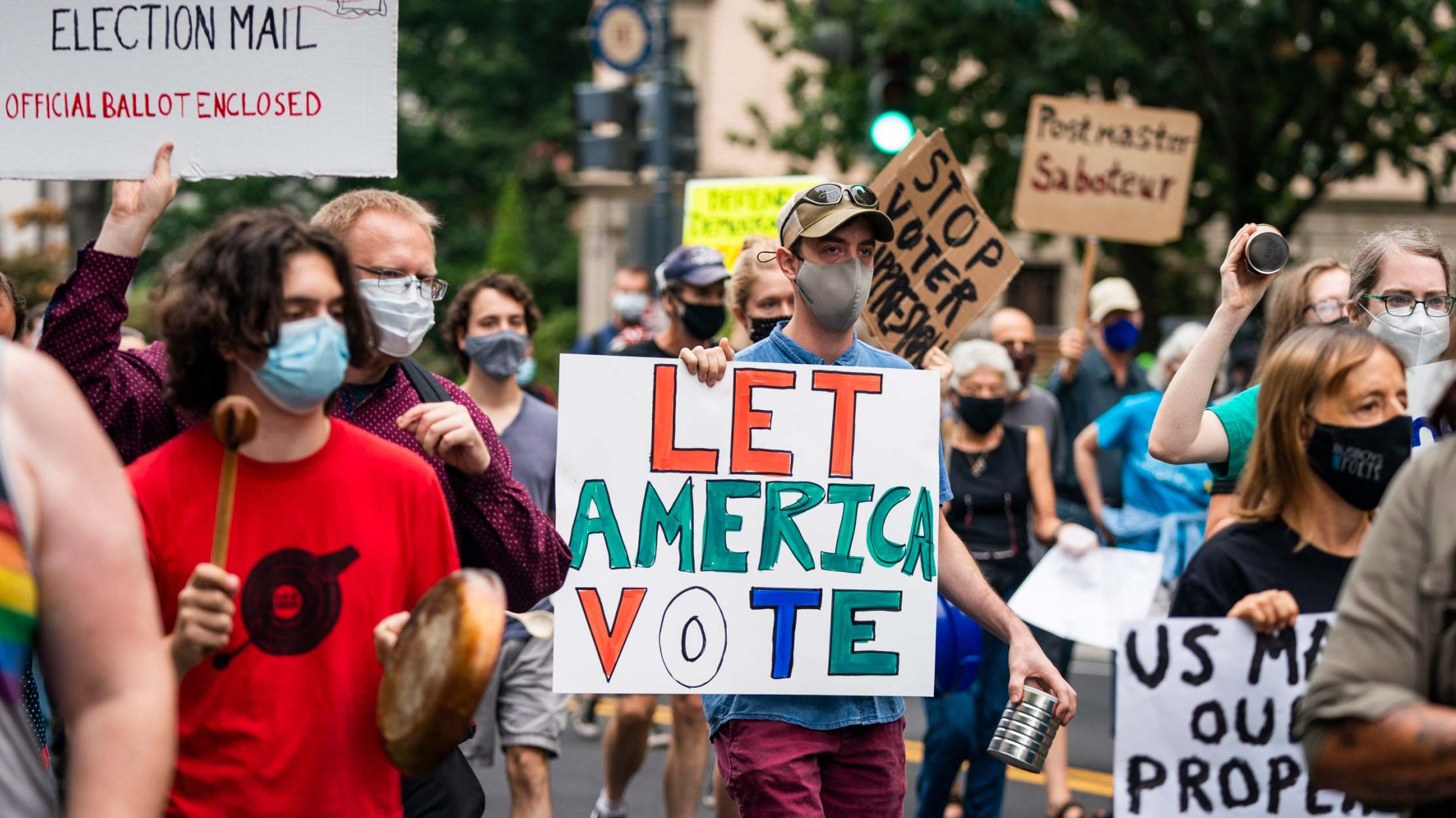 Mobilizations were held over the weekend against Trump and in support of the USPS.

An unprecedented crisis has befallen the United States Postal Services (USPS) that could be detrimental to the upcoming general elections in the country. On Monday, the US House of Representatives, dominated by the opposition Democratic Party, announced a session on Saturday to pass a USD 25 billion worth of funds to the USPS as part of an upcoming COVID-19 relief package.

The details of the new pandemic deal are yet to be finalized, but will work to ensure bridging budgetary shortfall in the USPS. It will also include measures to reverse several recent operational changes made by the new postmaster general Louis DeJoy. Democrats in the US Senate are also clamoring for a session to discuss the USPS crisis.

The Republican Party strongly opposed such funding to the agency, which has been facing a serious financial crunch, affecting its ability to deliver mail on time. The Republicans have argued that it will require a comprehensive plan to address the budgetary shortfalls facing the agency. Last week, President Donald Trump, who appointed DeJoy in June this year, has also threatened to veto the relief package bill over the USPS funding.

In the meanwhile, protests were taken out both against the Trump administration and the postmaster general in recent days. On Monday itself, hundreds of protesters congregated at DeJoy’s residence in North Carolina, calling for his resignation. Smaller demonstrations were also held outside USPS offices across the country, including the postmaster general’s office in Washington DC.

The reason behind such intense debate over the crisis is the radical changes that are expected to happen in how voting will be done in the middle of the pandemic. The usage of mail-in voting or postal ballots are expected to become a significant part of the upcoming general election, scheduled for November.

In the US, postal ballots are already a significant phenomenon, as it has become more accessible for voters, especially the elderly who have higher than average turnout. In the 2016 general elections, around 21% or one out of every five votes were cast through postal ballots, which translates to nearly 37 million votes.

At least three-fourths of the voters are eligible to vote by postal ballots in the upcoming election, and the number of mail-in voters is expected to grow upto 80 million. This change in voting behavior is also due to concerns associated with larger gatherings in voting booths, in the pandemic that has already killed over 170,000 people in the country.

Trump and his Republican Party have opposed expansion of postal ballot access to voters for the November election, citing public health concerns because of COVID-19. However, paradoxically, he made his threat to block USPS funding in order to block expansion of postal ballots, and to push for in-person voting, which arguably be a higher COVID-19 risk. The Democrats on the other hand have alleged that such opposition to the funding is an attempt by the ruling bloc to sabotage elections.

The USPS has also been facing a backlog of pending and undelivered mail, due to an internal crisis. Much of the crisis is seen to have precipitated by the sweeping operational changes implemented by DeJoy after he was appointed as USPS chief. Some of the changes included moves like cancelling overtime and extra trips, as measures to supposedly deal with budgetary shortfalls. It was also reported that several high-speed mail-sorting machines were also removed to apparently cut costs.

The direct consequence of these changes was that the delivery delays only increased, to the point that postal ballots are expected to be affected. On August 14, it was reported that the USPS had warned 46 states and the federal capital that it may not be able to deliver postal ballots in time for the November elections.

Postal ballots have long been a key issue in ensuring franchise for all. The Democrats have especially come out in support of postal for the November election, despite their earlier stand against postal ballots during the primaries in many states. Expanding postal ballots have tended to increase the turnout rate for racial minorities like Blacks and Hispanics, who are more likely to vote for the Democratic party, meanwhile, limiting postal votes have often helped the Republicans.

Back in June, questions had already been raised over the appointment of DeJoy as the postmaster general. DeJoy is the first such person in more than two decades to have been appointed to the post with no experience in the USPS. Furthermore, as he is also a Republican donor and a businessman close to Trump. Democrats have raised questions of whether his appointment was a deliberate move to manipulate elections in his favor.

On Friday, DeJoy will be testifying before a Senatorial Committee over the USPS crisis and the allegations made against him.