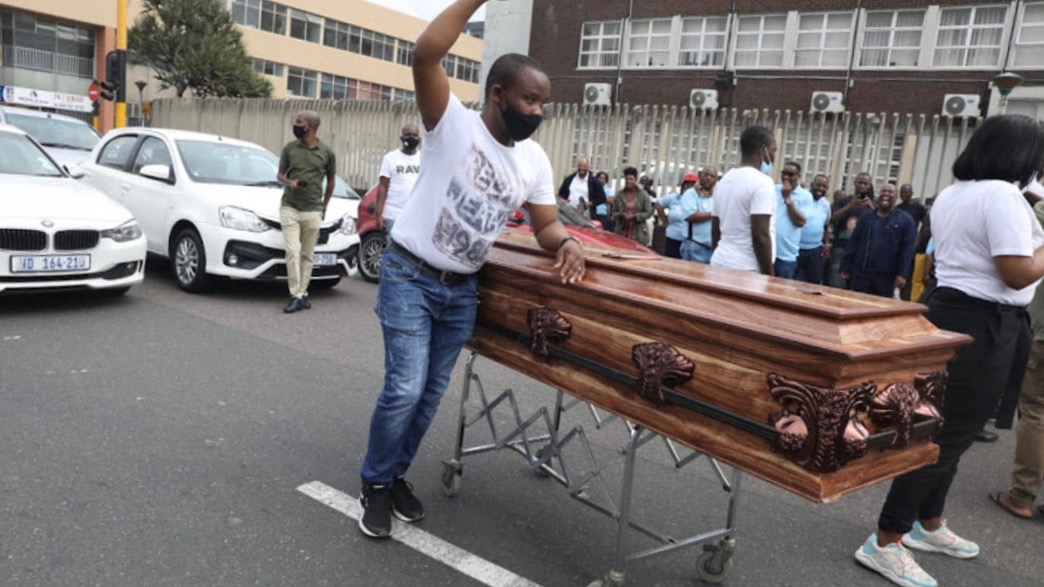 Protesters hold a mock burial of "white monopoly" at a demonstration outside Gale Street mortuary in Durban. (Photo: Sandile Ndlovu)

South Africa’s health department has reversed its position on the regulations governing funeral undertakings. This is after workers and employers of over 3,000 small funeral undertaker firms embarked on a three-day strike starting from Monday, September 14.

Despite the government’s concession, the sector’s owners and worker said they would continue to Wednesday, until the government gives concrete assurance about addressing their grievances. Workers staged protests in a number of cities and their strike led to bodies piling up in mortuaries in various parts of the countries.

As per the funeral undertakers, governing regulations and their inconsistent interpretation by local authorities tends to favor “capitalist monopolies” while squeezing smaller firms out of business.

“The government has been squeezing us out of this business for a long time by not changing laws that were there during the apartheid regime. The laws favor capitalist monopoly, making it difficult for our members to operate,” said Peter Matlatle, coordinator of the umbrella organization, Unification Task Team, which claims to represent 3,000 small firms in this business.

Muzi Hlengwa, president of the National Funeral Practitioners Association of South Africa (NAFUPA), claimed that all its 1,000 members are also on strike.

These firms require a ‘certificate of compliance’ to operate, which is granted by the municipalities. However, there are differences in the interpretation of these regulations by the various municipalities. This has primarily to do with storage facilities. Smaller firms, especially those from townships, are often unable to afford the cost of storage facilities and have to lease refrigeration facilities from larger ones.

“Some municipalities are okay with this, but some believe it is against the regulations and won’t issue certificates to undertakers who are leasing refrigerator space off site,” Ground Up reported.

Matlatle insists that this practice is inherently unfair because “[b]y nature of the background of our members, most cannot afford to operate a fully-fledged mortuary because of the prohibitive costs involved. We want to be allowed to outsource services like provision of bulk fridges in the cold rooms. Outsourcing should be legalized, but the government penalizes us if we do so … The government itself outsources its mortuary services.”

The health department, reportedly under pressure from mortuaries being overwhelmed with uncollected bodies on the very first day of the strike action, retracted from its previous position and said that there was no restriction against outsourcing.

“There is no regulation against this demand. There is no requirement for a Certificate of Competency in removing a body.. This was done in order to track and trace when the human remains are collected. Local health facilities made those arrangements so that they have a record,” the department said in a statement.

As the strike action began, NAFUPA members gathered outside the Gale Street mortuary in Durban to hold a protest demonstration in which, carrying a coffin, they gave a mock burial to what they called the ‘white monopoly’, which still dominates most of the industry.

In the meantime, the Chris Hani Baragwanath Academic hospital in Soweto was picketed by workers who had downed tools. “There won’t be any removals from government mortuaries and government private hospitals from Monday until Wednesday. We are here to ensure that no undertaker leaves with a body from this hospital,” Muzi Magubane, the task team facilitator of Soweto undertakers, told News 24.

The strike action left mortuaries unable to cope with the number of uncollected bodies, demonstrating the essential nature of their service. The health department was thus “pressed.. to come up with answers on the same day of the strike,” NAFUPA’s president Muzi Hlengwa said on Tuesday.

Hlengwa however clarified that they were still waiting for an agreement with the departments of Home Affairs, Cooperative Governance and Traditional Affairs – all of which have jurisdiction over this sector.

Similar demands were placed before the government in a memorandum submitted after a demonstration in the capital city, Pretoria, last year. However, the government allegedly failed to respond to the memorandum.