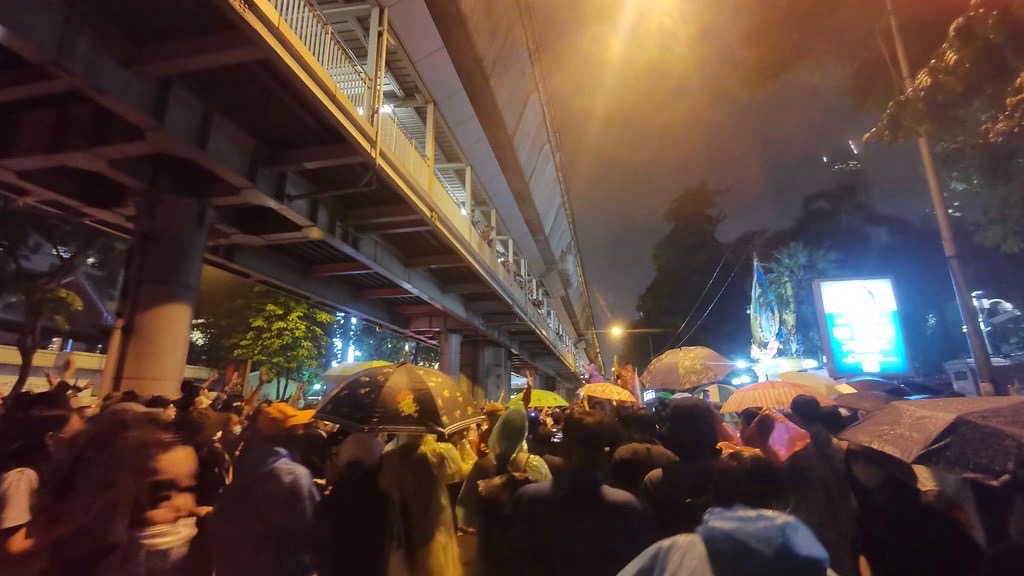 A protester holding a placard in support of the 21 people detained on October 13. (Photo: Prachatai)

As protests continue to intensify in Thailand following the arrest of 21 activists and demonstrators earlier this week, the government imposed a state of emergency on October 15, Thursday. The state of emergency will effectively ban mass gatherings in public places. The government has explicitly stated that the move is to “put an end” to the protests. On Friday, prime minister Prayuth Chan-ocha said that he would not resign. His resignation was a key demand of the protesters.

Despite the ban, thousands of protesters continued to blockade and occupy the Democracy Monument in capital Bangkok on Thursday and protests continued on Friday. Other demonstrations and rallies are also being held across the city.

On Tuesday, 21 activists were preemptively arrested as they arrived at the Monument to prepare for a demonstration planned for the next day. The scheduled Wednesday demonstration was meant to coincide on with a royal motorcade passing by the Monument in the afternoon.

Of those arrested, only one managed to secure bail for being a minor. 19 others were denied bail and detained for six days by a municipal court. Jatupat ‘Pai Dao Din’ Boonpattararaksa, a former student activist and long-time critic of the monarchy, was taken to the Bangkok Criminal Court. The court ruled that Pai Dao Din’s actions of organizing the protests constituted “sedition” and denied him bail. All the 20 remaining detainees are being held by the Border Patrol Police (BPP), a paramilitary force used for border control and insurgencies.

The news of the arrests caused widespread outrage across Bangkok, with hundreds holding night-long demonstrations outside the police headquarters. By Wednesday morning, hundreds began occupying the Democracy Monument. In the aftermath of the arrests, the number of participants swelled to over ten thousand, according to reports.

Some have speculated that the state of emergency came largely in response to a show of defiance by protesters against the royal motorcade. Protesters were seen holding a three-finger sign (inspired from the Hunger Games film franchise) and shouted anti-junta slogans at the motorcade, which carried the queen.

On the same day, protesters held a march across the capital, with thousands of them camping outside the Government House that houses the prime minister’s office. By Wednesday, the government had deployed the national police along with paramilitary forces across the city to subdue the protests.

With the announcement of the state of emergency, protesters at the Government House were forcibly cleared by riot police early in the morning in a matter of hours. At least seven more were arrested.

The demonstrations on Wednesday were also met with counter-protests in support of the monarchy and the lèse-majesté laws that protect it from criticism. In some parts of the city, the counter-demonstrators clashed with the protesters. However, the protests remained entirely non-violent and peaceful across the city.

The anti-government protests, which began as a student-led protest against the nation’s lèse-majesté laws, witnessed thousands of people participating in sit-ins across Bangkok. Beginning from the Thammasat University campus near the capital, the protests have grown into a movement against the civic-military junta in power led by the government of Prayut Chan-o-cha.