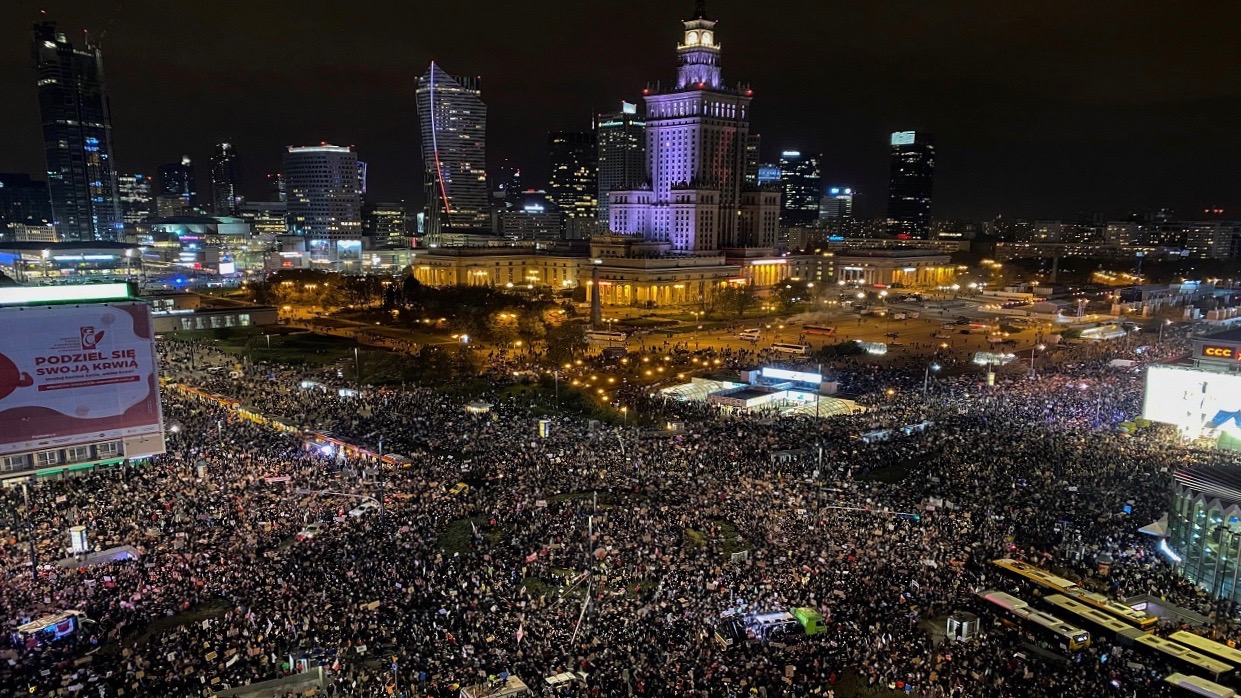 Sporadic protests are continuing in Poland against against the country’s constitutional court’s anti-abortion ruling even as the government a few days ago indicated its willingness to talk to the protesters. The widespread uproar has forced the conservative government led by the Law and Justice (PiS) party to delay the implementation of the constitutional court’s verdict, which was otherwise supposed to be in effect from November 2, Monday. Under popular pressure, president Andrzej Duda proposed certain dilutions to the ruling. On November 3, prime minister Mateusz Morawiecki stated his willingness for discussions with the protesters and the opposition MPs before implementing the ruling.

The Polish constitutional court had ruled on October 22 that abortions in the case of fetal defects are unconstitutional. Since then, women’s rights groups including the National Women’s Strike (Strajk Kobiet), the Polish left – Lewica Razem, and other liberal sections have been protesting across the country. According to reports, over 100,000 people demonstrated in Warsaw on October 30, condemning the anti-women verdict.

The National Women’s Strike has alleged that several of its activists have been intimidated by the police for organizing the protests. Supporters of the right-wing PiS have also tried to disrupt rallies against the anti-abortion verdict at various places.

As the protests continue in Poland, progressive sections across the world have expressed solidarity with Polish women and are also organizing solidarity events in several cities.

Protest marches were held near the Polish embassy and the Polish Institute in Berlin under the leadership of the group, Dziewuchy Berlin. The Die Linke (The Left) in Germany also expressed solidarity with the Polish women who are fighting the misogynistic PiS regime.

In London, a massive solidarity demonstration was organized by Dziewuchy London and Razem London on November 1. Images were projected onto the buildings of the Polish embassy in the UK, the Westminster House of parliament, Tate Modern, and the Tower Bridge.The London Irish Abortion Rights Campaign too extended solidarity with the protests and stated that “the court’s decision—to outlaw the right to abortion on the grounds of severe health defects—means Polish women and girls now face similar restrictions Irish women faced before the repeal of the eighth amendment in 2018. No woman should be forced to leave their country to access essential healthcare.”

Women’s rights groups in Switzerland organized solidarity marches in Zurich and Geneva on October 31 and November 1. The Women’s Strike, Feminist Strike (Greve des femmes; Greve feministe) group stated that “the ban on abortion is a violation of the bodies of women which belongs to nobody, neither to the Church nor to the state nor god.”

Women’s groups in Portugal, including the March 8 Network, also organized demonstrations in Porto, Lisbon and Coimbra. Protesters expressed solidarity with the women who are fighting the anti-abortion ruling by the Polish constitutional court.

In France, the French Communist Party (PCF) expressed its solidarity in a statement affirming its support for the Polish feminist movement and the Polish women fighting for their freedom of choice and their inalienable right over their bodies. “The European Union must ensure that fundamental rights are respected everywhere instead of showing its usual pusillanimity on these subjects,” stated the PCF.