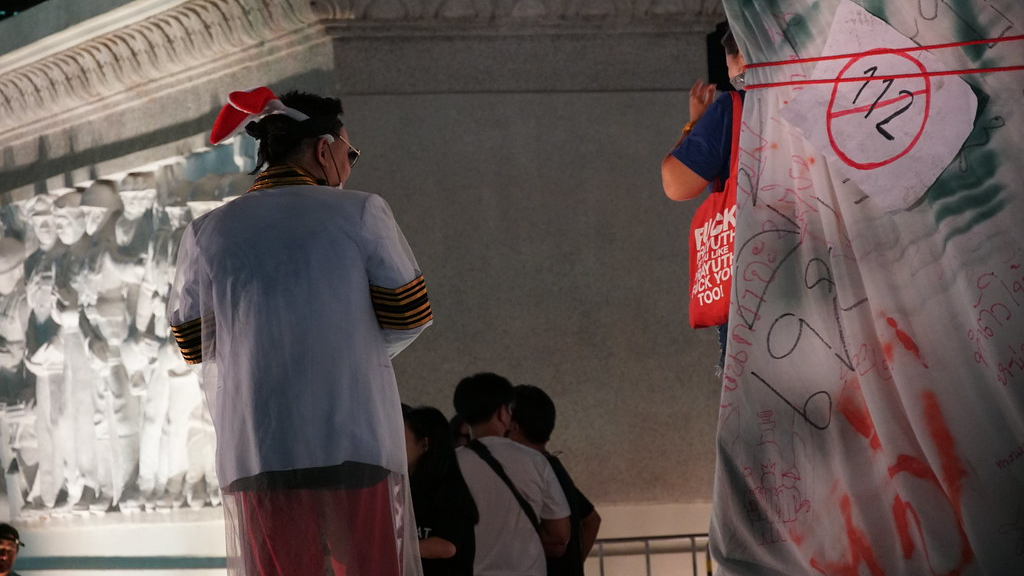 Protesters at the Democracy Monument in Bangkok | Credit : Prachatai

The Thai police have summoned 15 anti-government protestors to face lèse-majesté charges under Article 112 of the Thai Criminal Code. The summons, filed on Tuesday, were announced just a day ahead of a planned demonstration demanding that King Vajiralongkorn or Rama X hand over the royal fortune to public control. The summons were sent to some of the most prominent faces of the nearly four-month long protest movement.

The protesters have been given until November 30 to respond to the summons. The charges against them revolve around statements made about the king and members of the royal family during the course of the protest. Once convicted under Article 112, the accused can face a prison sentence of upto 15 years.

The lèse-majesté law in Thailand is infamous for its broad scope and stringent punishments. Moreover, with an incredibly high conviction rate and the fact that over a third of Article 112 cases are tried by military-controlled courts, the law has become a political tool in the hands of successive military regimes.

The use of Article 112 against citizens will be the first such case since at least July 2017. The Prayut Chan-o-cha government claimed, in June this year, that this policy of not invoking the notorious provision was a result of the King’s “mercy.”  The prime minister went back on it on November 20 and stated that the government will make use of “all laws and articles” against the protestors. The government meanwhile continued to persecuted activists under equally punitive charges like sedition.

The International Federation for Human Rights (FIDH) condemned the use of lèse-majesté against protesters. “After failing to deter peaceful pro-democracy demonstrations with unnecessary and disproportionate use of force, the Thai government is now using lèse-majesté to silence protesters,” said FIDH secretary-general, Adilur Rahman Khan.

Parit “Penguin” Chiwarak confirmed the summons sent to his family over Twitter. “To those who thought to use this section [Article 112], let me tell you right here that I am not afraid.” He also added that the “ceiling is broken” referring to the breaking of the long-standing taboo on criticizing the monarchy.

The movement was sparked by students at the Thammasat University in July, initially calling for major reforms in the powers of the monarchy. After police repression on students, the movement turned into a nationwide call for a return to democracy and the resignation of the Chan-o-cha government, which came to power first after the coup d’etat of 2014.