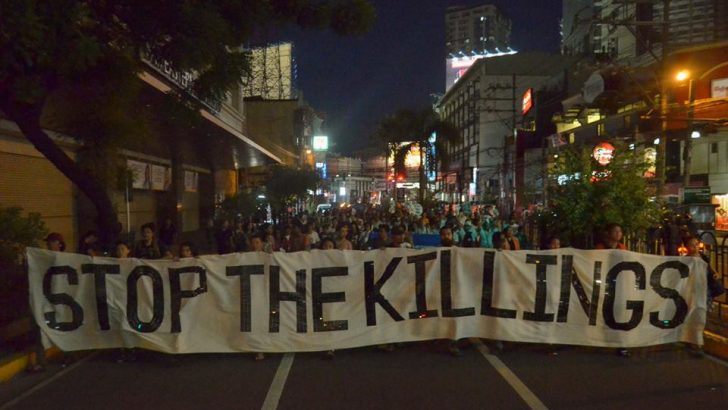 Human rights organizations in the Philippines allege that anywhere between 5,000 to 20,000 were killed in the violent anti-drug campaign of the Duterte administration. Photo: Bulatlat

The prosecutor’s office of the International Criminal Court (ICC) has found “reasonable basis to believe” that crimes against humanity have been committed by Rodrigo Duterte’s government in the Philippines. The findings are part of the annual report issued by the office of ICC’s chief prosecutor, Fatou Bensoda, on December 14, Monday, and announced on Tuesday.

The report found that the government of Rodrigo Duterte has committed crimes like murder, torture, and inflicted serious physical injury and mental harm on victims between July 2016 and March 2019. The report focused on allegations levelled by human rights groups and grassroots activists from the Philippines about the Duterte government and its officials encouraging and sanctioning extra-judicial killings of suspected drug users.

Bensouda stated that a decision on whether or not to prosecute Duterte and his officials under charges of crimes against humanity would be taken by the earlier half of next year. Responding to the announcement by Bensouda, the Duterte administration dismissed the report’s findings as little more than speculative, and insisted that the ICC no longer has any jurisdiction over the Philippines.

The Philippines announced its withdrawal from the ICC and the Rome statute in March 2019, after Bensouda initiated a preliminary investigation into its drug wars in 2018. The chief prosecutor noted that even though the Philippines is no longer party to the Rome statute, the court still has the jurisdiction to investigate crimes committed in the country between 2011 and 2019 – the period when it was a signatory with no time limit.

Initiating a full-fledged prosecution against the president can lead to international sanctions since he will not be protected by judicial immunity. Duterte came to power in June 2016 and shortly after launched a violent anti-drugs campaign that killed between 5,000 to 20,000 people (depending on varying estimates from government, civil society groups and opposition leaders).

Human rights groups and grassroots movements have welcomed the findings of the report and the announcement by Bensouda.

“There is no doubt that the policies and operations under the Duterte administration are responsible for the onslaught of extra-judicial killings and other human rights violations under the ‘war on drugs’. State officials and police forces were both brazen and confident that they would enjoy impunity in their crimes,” responded Rise Up for Life and for Rights (Rise Up), a group fighting towards justice for the families of victims of extrajudicial killings.

Edre Olalia, president of the National Union of People’s Lawyers, said that the findings of the report will have “a very considerable development that has far reaching repercussions.” The report was also welcomed by Cristina Palabay, secretary general of Karapatan. Palabay also pointed out that the findings are very much in line with earlier reports by various national and international groups, including the United Nations High Commissioner for Human Rights.

“The day of reckoning is coming nearer for the Duterte’s reign of terror… we press our calls for justice for the Duterte administration’s brutal crimes against the Filipino people,” said Palabay.