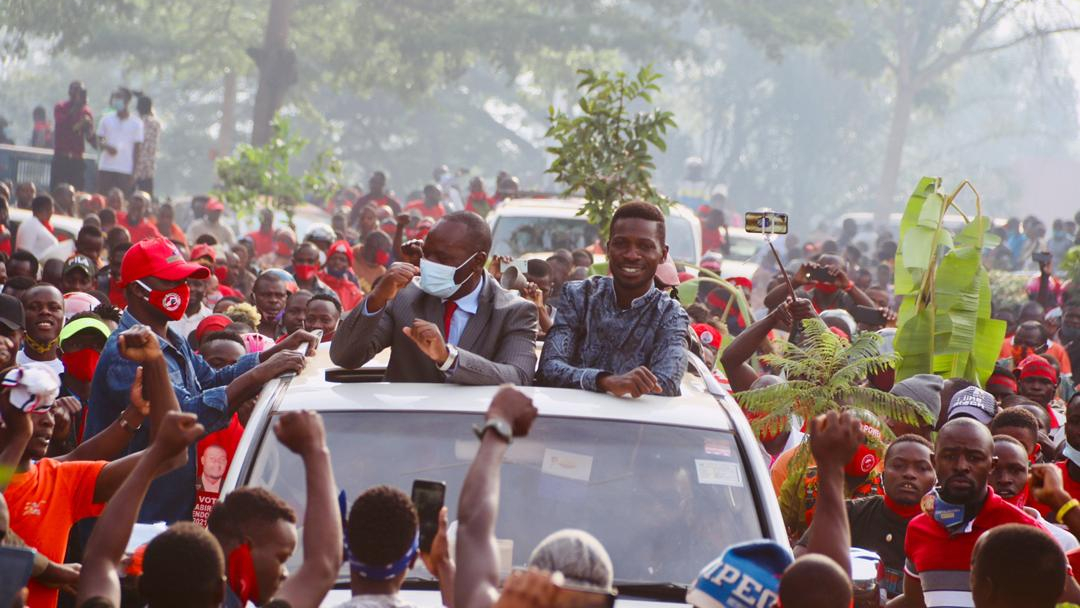 The personal bodyguard of Uganda’s presidential candidate Bobi Wine was killed and two journalists were injured on Sunday, December 27, when the security forces attacked one of his rallies with tear gas in central Uganda. Bobi Wine later claimed that his bodyguard, Francis Senteza Kalibala, was deliberately run over by a military vehicle while he was trying to help one of the journalists injured in a clash between Wine’s supporters and the police.

The journalist identified as Ashraf Kasirye was hit by a tear gas canister on his head when security forces attacked Wine’s rally. His condition is said to be critical.

I regret to announce the murder of my security team member Francis Senteza Kalibala aka Frank. He was deliberately ran over by military-police truck, No. H4DF 2382 which blocked us in Busega on our way to Rubaga to get Kasirye Ashraf emergency medical attention.

Security forces have cited COVID-19-related restrictions on public gatherings as the reason behind the actions against Wine’s rally. Sunday’s attack was the third since Wine filed his nomination on November 3. Minutes after he filed his nomination, Wine said that he was beaten up by the Ugandan police. He was arrested on November 18 which led to massive violence in the country killing at least 37 people. Though released after two days, he has complained of continuous harassment by the police and the authorities. He had suspended his campaign for a few days earlier this month claiming a threat to his life after an attack by the security forces injured some of his campaign team.

Security forces and authorities claim that Bobi Wine had been violating the guidelines issued by the state to curb the spread of COVID-19 in the country. According to the guidelines, gatherings of more than 200 people are not allowed, but most of Wine’s rallies see a large crowd.

On December 26, the authorities issued an order halting all political rallies in the capital Kampala and the 10 most populated districts in the country citing risk of spreading the virus. Critics, however, see it as an attempt to prevent the opposition from campaigning.

SUSPENSION OF GENERAL ELECTION CAMPAIGN MEETINGS IN SPECIFIED AREAS OF THE COUNTRY- THREAD;

Wine, whose real name is Kyagulayani Ssentamu, is a pop star turned politician. He is contesting the presidential election in Uganda against the longtime president Yoweri Museveni and is considered to be growing increasingly popular among the people. Museveni and his National Resistance Movement party has been in power since 1986.