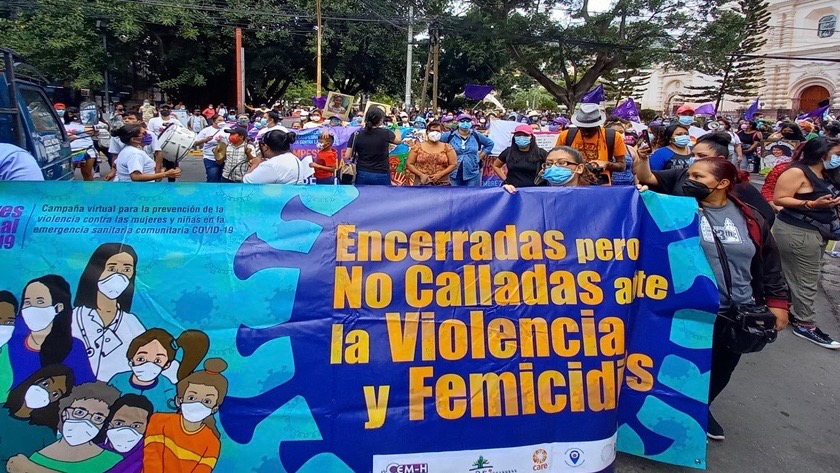 Hundreds of women held a peaceful mobilization in the center of capital Tegucigalpa on January 25 to demand abortion rights and an end to violence against women in Honduras. (Photo: Conexihon)

January 25 is celebrated as Women’s Day in Honduras. On this day in 1955, Honduran women won a historic political conquest: the right to vote and participate in the country’s democratic process, thus managing to achieve a place for themselves in a sphere outside the domestic realm.

However, this January 25, women across the Central American country claimed that “there is nothing to celebrate”, condemning the recent decision of the National Congress that reinforced the ban on abortion in the country. They also denounced the increasing femicides, rapes, and other forms of violence against women throughout the national territory.

In the capital Tegucigalpa, hundreds of women carried out a peaceful march in the center of the city to demand abolition of the reform that makes it harder to overturn the constitutional ban on abortions and denies millions of women access to this integral human right in safe conditions. They also demanded that the government implement public policies aimed at eliminating all forms of gender-based violence and achieving gender equality in the country.

Thousands of women also took to social media networks to raise these demands. Throughout the day, women posted their photos with messages that reflect the situation of women and girls in Honduras. Several hashtags* calling for the legalization of abortion and same-sex marriage and an end to violence against women, among other demands, flooded Facebook, Instagram and Twitter.

Last week, on January 21, in a virtual session, the National Congress of Honduras approved a constitutional reform that permanently outlaws abortion in the country. The reform amended article 67 of the constitution to include in it the legislation that prohibits abortion and criminalizes women who terminate their pregnancy along with anyone else involved in the abortion process. In addition to the article that gives a fetus the legal status of a person, another article stating that civil marriage in the country can only be between a man and a woman was also passed, banning same-sex marriage in the conservative nation.

Furthermore, the reform establishes that a majority of three-quarters of the legislators will be required to modify or repeal these articles. Currently, all constitutional changes require a two-thirds majority vote in the 128-member legislative body. The reform, called a “shield against abortion”, was presented by deputy Mario Alonso Pérez of the ruling nationalist party led by far-right president Juan Orlando Hernandez.

Feminist organizations such as Somos Muchas rejected the reform that would make it virtually impossible to legalize abortion in the country. They denounced the deputies for completely disregarding the human rights of Honduran women and adolescents despite the alarming maternal mortality and morbidity rates from unsafe abortions.

Various LGBTQ rights activists and organizations also rejected the reform that makes civil union between same-sex people punishable and warned that it would deepen the discrimination against gender diverse people.

The amendment still needs a second vote in the unicameral parliament next year before it is enacted. The Somos Muchas platform proclaimed that “history cannot be stopped and the future cannot be banned. Abortion will also be legal in Honduras!”

The Office of the United Nations High Commissioner for Human Rights (OHCHR) in Honduras lamented “the constitutional reform for the absolute prohibition of abortion” and reminded that “it disobeys international obligations and specific recommendations to the State of Honduras on women’s rights.”

The OHCHR also expressed concern about the reform on the prohibition of same-sex marriage and said that it “violates the principles of equality and non-discrimination.”

Honduras is one of four Latin American countries that prohibit abortion in all circumstances, including in cases of rape, incest, when the life or health of a pregnant woman is in danger or when there is a malformation of the fetus that prevents life after birth. The country’s criminal code imposes prison sentences of up to six years on women and girls who induce abortions and on medical professionals who provide them. It is also the only country in the region that has banned the use of emergency contraceptives even in the case of rape. The sale, distribution and purchase of contraceptives is subject to the same prison penalties as abortion.

The UN estimates that every year between 51,000 and 82,000 abortions are performed in unsafe and clandestine conditions in Honduras.

Honduras is a country plagued by gender-based violence and has one of the highest teen pregnancy and femicide rates in the region. Official data estimates that one in four Honduran women who become mothers is under 19 years of age and that about 2,300 cases of sexual assault are registered annually in the country.

In 2019, 882 girls between the ages of 10 and 14 gave birth to a child, while 406 women were assassinated in the country. In 2020, violence against women increased amid the lockdown due to COVID-19 pandemic. The National Police of Honduras reported that more than 90,000 calls on domestic violence and sexual assault were received on the women’s helpline number last year.