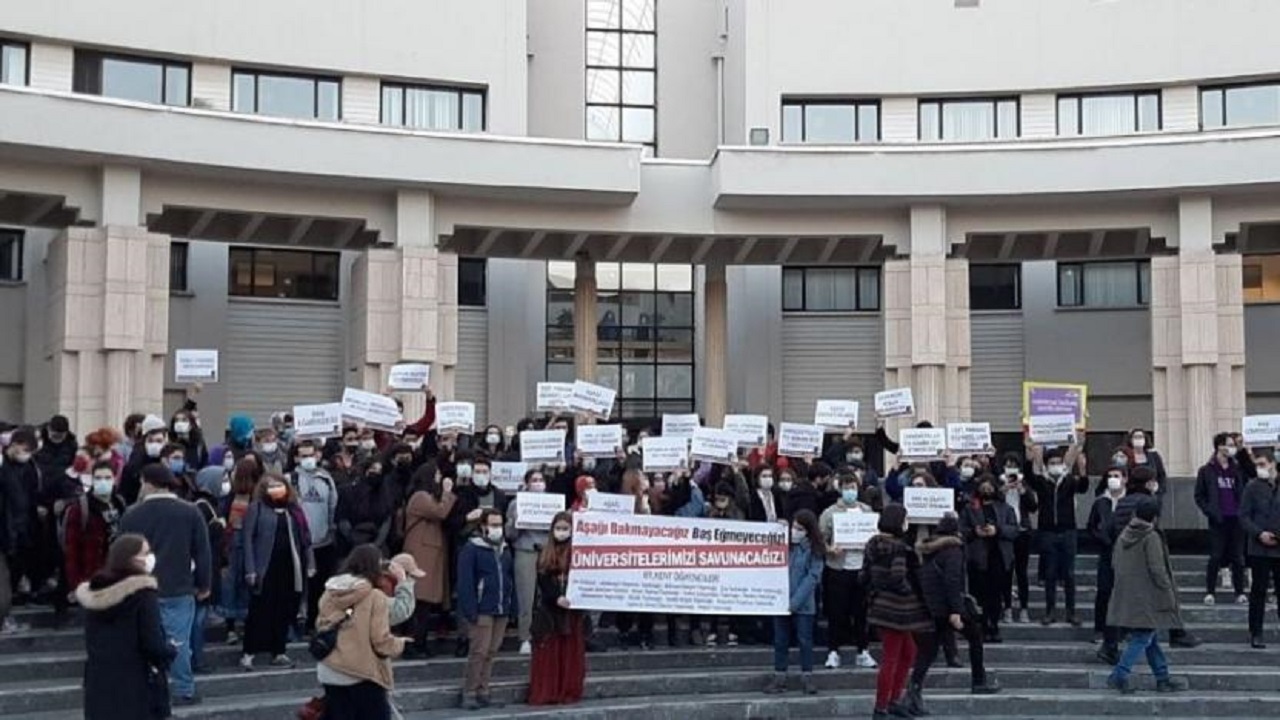 A mobilization at Bilkent University in Ankara in solidarity with the students of Boğaziçi University. Photo: SoL.org

Braving widespread crackdowns, students across Turkey have intensified their mobilizations against the state attack on the autonomy of academic institutions. Since the beginning of protests by students and teachers of the Boğaziçi University against the appointment of president Recep Tayyip Erdogan’s nominee as the rector, hundreds have been arrested. On Friday, February 5, police detained around 30 people at Izmir who were demonstrating in solidarity with the students of Boğaziçi University.

Earlier, SoL.org reported that Turkish police had detained 159 students on Monday to prevent a mobilization and press meet called by the students of Boğaziçi University. The police also cracked down on demonstrations in Ankara and Kadikoy in Istanbul. The governorate of Istanbul tried to block the student mobilizations on the pretext of COVID-19 protocols. But it did not prevent the demonstration by an Islamist group which called  Boğaziçi students as the”enemies of Islam.”

The protests began on January 4 against the undemocratic appointment of Erdogan-loyalist Melih Bulu as the institution’s rector. Students and activists across the country have hit the streets in solidarity with students of Boğaziçi University. Citing the usage of LGBT flags and symbols in the protests, Erdogan has categorized the protesters as ‘terrorists’ and LGBT people who lack Turkey’s “national and spiritual values.” On February 6, Erdogan had also issued a presidential decree with a number of new steps, including the appointment of 11 new rectors in different universities in Turkey, and to establish a Law and Communication Faculty in Boğaziçi University and Faculty of Medicine and Health Services Vocational School in the Turkish-controlled region in Aleppo, Syria.

The protesting students and the progressive sections in the country have condemned Erdogan’s tirades against the protests. Kemal Okuyan, Secretary General of the Communist Party of Turkey (TKP), said that “there is a great accumulation of anger in the society and this anger is looking for ways to reveal it. When this occurs, sympathy develops in the society and people want to participate.” The Communist Youth of Turkey (TKG) is also actively taking part in the protests.