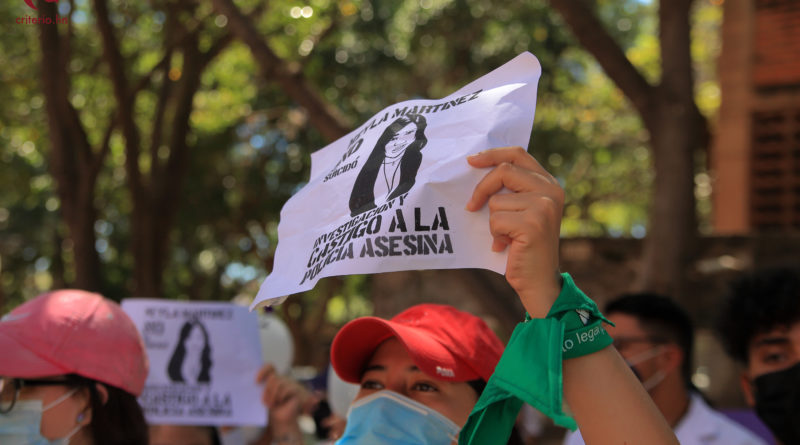 Protests have been taking place in several cities across Honduras following the death in police custody of Keyla Martínez, a 26-year-old nursing student. Photo: Criterio.hn

Protests have been taking place in several cities across Honduras following the femicide of 26-year-old nursing student Keyla Martínez in police custody. Martínez had been arrested by the police in the city of La Esperanza in the northwestern department of Intibucá for allegedly violating curfew on the night of February 6.

Once the news of Keyla’s death broke, hundreds of people in La Esperanza protested outside the police station to denounce her murder and attempts by the police to cover-up their role in her death. The protests, which continued over the following days, were responded to with heavy repression by members of the National Police and a command of the Special Forces which were reportedly sent to the city to aid in the repression. Videos circulating on social media as well as reports from human rights organizations show citizens were shot at with tear gas, pushed and hit with their shields and batons.

National deputy from the Libre Party Olivia Zúniga Cáceres wrote on Facebook that she was informed that large contingents of police and military were mobilized to the area where the protest was taking place and the entrances to the city were closed. She wrote, “It is abhorrent because they have not mobilized in this way to arrest the police that are linked to the events that took place at dawn on [February 7]. They want to impose terror but we will show them that our dignity and our desire for justice is greater.”

During one of the protests, Zúniga herself was attacked by the police while giving an interview.

On February 9, Yuri Mora, spokesperson from the Prosecutor’s office, announced initial findings from the autopsy and investigation into the death of Keyla and confirmed that her death was from strangulation, indicating that it was a homicide. Mora also requested the police to cooperate with the investigation and make those who were working at the station that night available to the prosecutor’s office.

It was only following this announcement that the National Police announced the immediate suspension of the police officers involved in her murder. However legal action is yet to be taken against them.

Protests spread to other cities in the Honduras including the capital Tegucigalpa and Choluteca to demand justice for Keyla and all of the victims of femicide in Honduras. During the protest on February 10 in Tegucigalpa, the police detained five students and attempted to charge them with damage, arson, illegal protest and injury. Human rights organizations denounced the fact that while the police who murdered Keyla walk free, those who demand justice are criminalized.

The Civic Council of Popular and Indigenous Organizations of Honduras (COPINH) declared that the Honduran state is responsible for the death of Keyla Martínez which they classify as “an extrajudicial execution and a femicide executed by members of the police.”

“From the moment that she was arrested and put in jail, the protection of her life was the responsibility of the police, as well as the incidents that led to her death,” COPINH wrote in a statement.

The organization also highlighted that Keyla’s assassination has sparked a wave of denouncements from women who have been arrested in the context of the curfew imposed by the regime of Juan Orlando Hernández and reported to have been robbed of their belongings and sexually abused by officials.

The Center for Women’s Rights stated, “The femicide of Keyla Martínez is added to the history of abuse of power and disproportionate use of force, that with or without the curfew, are exercised by public functionaries, above all police and military, against the population.”

Honduras has some of the highest rates of violence against women in the region and very high rates of impunity for those that commit these types of crimes. Reports state that in 2019, 406 women were assassinated in the country, while in 2020, according to Forensic Medicine of the Prosecutor’s office, 321 women suffered violent deaths. Four femicides were recorded on February 7 and 8, including Keyla’s death.