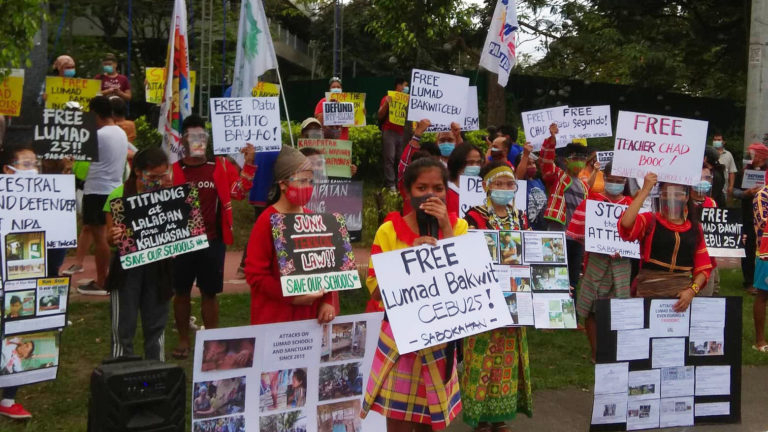 A protest rally held outside the Commission on Human Rights on February 15, condemning the raid and arrests in the Lumad bakwit school in the University in San Carlos-Talamban. Photo: Fred Dabu/Bulatlat

Activists, human rights lawyers and opposition groups have strongly condemned the raid and arrest of children by the Philippines National Police (PNP) at a sanctuary school for a displaced indigenous community. The raid which happened on Monday, February 15, at a school in Cebu City, had the police personnel arresting 26 teachers, students and community members, confirmed the local arm of the National Union of People’s Lawyers (NUPL).

The bakwit (evacuee; a Visayan colloquial term for those forcibly displaced) school is a sanctuary for a group of displaced Lumad people, on the premises of the Talamban campus of the Catholic-run University of San Carlos (USC). According to Rappler, the raid was conducted by the local division of PNP, along with the Department of Social Welfare and Development (DSWD) and the Armed Forces of the Philippines (AFP), as a supposed “rescue operation.”

Initial reports suggested 25 persons were taken by the police, leading to them being called the “Lumad 25” by activists and rights groups demanding their release. But the NUPL, which is now legally representing the arrested, have confirmed the number to be 26.

The 26 persons arrested includes 21 Lumad students, 19 of whom are reported to be minors, while the rest include teachers and community elders or datus. The Lumad bakwit schools on the USC campus have been catering to the children of dozens of indigenous families since at least March 2020.

The video of the arrests and captivity of the detainees was posted on social media by the Save Our Schools Network (SOS), a campaign that advocates against closure of Lumad schools. The viral video shows children crying and screaming while being forcibly dragged by the officers.

The SOS in a statement condemned the supposed operation as a raid. “Time and again, police and officials mouth the words ‘rescue’ but this disturbed the peace of Lumad evacuees and students, just as what happened in UCCP (United Church of Christ in the Philippines) Haran in Davao last 2015 and January 2020,” they said, referring similar raids and attacks on a Manila university indigenous sanctuary by authorities.

“We demand the immediate release of the 25 Bakwit School persons who are under custody of the police and DSWD,” the SOS statement added.

The SOS had estimated that from 2016 to 2020 at least 178 schools were closed down due to either attacks by being “red-tagged” or under pressures and orders of the government. The SOS group had documented over 584 “cases of attacks, ranging from school-related extrajudicial killings to sexual harassment cases, among others,” by authorities, between May 2017 to July 2019.

The local authorities have claimed that it had reports of children being given “warfare” training in the sanctuary schools. The Lumad peoples, a collective name for the dozens of indigenous communities in the southern Philippines, have faced expulsion, harassment and attacks from security forces and government forces because of the counter-insurgency programs of the government.

Thousands of people from the Lumad communities have been displaced by the military in southern Philippines. Many of them take refuge in church-based sanctuaries and shelter homes, but continue to face harassment from authorities. This is widely seen as an extension of the Rodrigo Duterte government’s repressive tactics in the name of war against the Maoist insurgents.

“The Lumad school children along with teachers and elders had sought refuge at USC as these same state forces and paramilitary members had threatened to kill teachers and students that forced them to leave their ancestral communities and sought refuge in the cities,” SOS said.

“What kind of rescue operation involved force and coercion by uniformed elements like the PNP, knowing that these students were victims of forced evacuation amid military and paramilitary operations in their…community,” asked Christina Palabay, the general secretary of human rights group Karapatan.

Opposition groups and trade unions have also come out against the raid and decried the police’s claim of a “rescue” operation. “Clearly, the claim to conduct a ‘rescue operation’ holds no water as this is a forced intrusion and threat to the democratic spaces within the university,” said a statement released by the local chapter of the progressive political party, Akbayan.

In the meanwhile, the Cebu branch of the All UP Academic Employees Union (AUPAEU), a teachers union, dismissed claims of a “rescue” by the police and asserted that it was in reality “a terrorizing operation aimed against helpless students whose screams belie the rhetoric of a rescue operation.”

(With inputs from Rappler and Bulatlat)