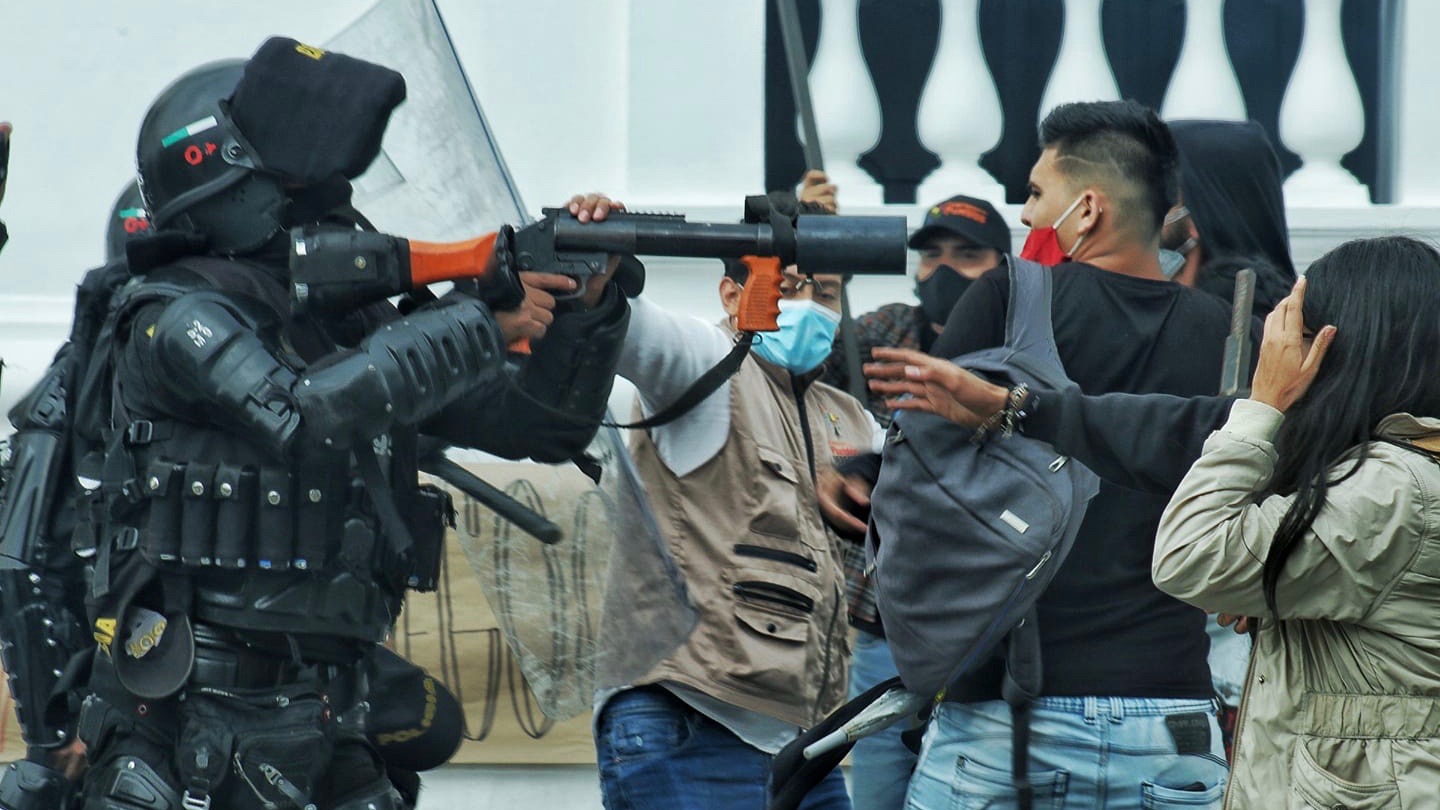 National police repressed with tear gas a peaceful protest by students of the Cauca University in Caldas Park in the city of Popayán on February 15. Photo: Manuel Fernando Messias

Since February 12, students from different public universities of Colombia have been demonstrating to demand that the national and municipal governments support higher education in the midst of the economic crisis deepened by the COVID-19 pandemic. They are demanding that the governments guarantee free tuition for all public university students across the country this year under the “zero tuition” program.

On February 15, dozens of students from the University of Cauca peacefully protested in the  vicinity of the Caldas Park in the city of Popayán, Cauca department. A group of six students tied themselves chains outside the mayor’s office to draw attention towards their situation and demand his support. They requested to establish an inter-institutional dialogue to guarantee resources.

However, they were repressed by the officials of the Anti-Disturbance Mobile Squadron (ESMAD) with tear gas and violently removed from the place. The ESMAD agents prevented the students from setting up a camp and dragged them away by force. Numerous students were affected by tear gas, women were beaten and at least one student was arrested.

Student leaders denounced the police for using excessive force and violating their right to peaceful protest. Nevertheless, they announced that they will continue to mobilize until the authorities make their contribution to finance students’ education.

Paula Andrea Muñoz Restrepo, student representative to the Academic Council of the Cauca University, in conversation with Colombia Informa on this issue, said that “our specific demand is that no student at the University of Cauca pay tuition fee, because due to the pandemic there have been difficulties in the homes of students that do not allow them to continue their studies. In this regard, the discourse of the national government and the territorial entities has been that the zero tuition is for students belonging to stratum* 1 and 2. We believe that this stratification is not a meter to define whether students have an economic stability to pay or not. This is why we are demanding aid for everyone, regardless of the stratum.”

Cauca University students held the first sit-in in Caldas Park on February 12, demanding financial support. The same day, in the capital Bogota, the students of the National Pedagogical University also held a sit-in in and around the university campus demanding economic aid to continue their studies from Bogota’s mayor.

On January 27, the Academic Council of the National Pedagogical University sent letters to the national government and the mayor’s office requesting them to allocate resources so that students do not have to pay tuition free for their semesters this year. In the letter, the students highlighted that 99% of the students of the university come from the families (stratums 1, 2 and 3) that have been financially affected by the pandemic. They pointed out that around 8,660 million USD are needed to cover the fees of these about 8,700 undergraduate students.

The academic year begins on March 15 and so far, only the University of Cundinamarca has announced that it will enroll undergraduate students for free during the first semester of this year.

*According to the National Planning Department of Colombia, there are six socio-economic stratum in which homes or properties can be classified. Belonging to stratum 1 means Low-Low, 2 is Low, 3 – Medium-Low, 4 – Medium, five – Medium-High and 6 – High. For several years, the national government stipulated that people who live in houses, apartments or properties belonging to levels 1, 2 and 3 are classified as low stratum, so these people are the ones who receive the greatest benefits and socio-economic aid, since in this population are the citizens with less resources.