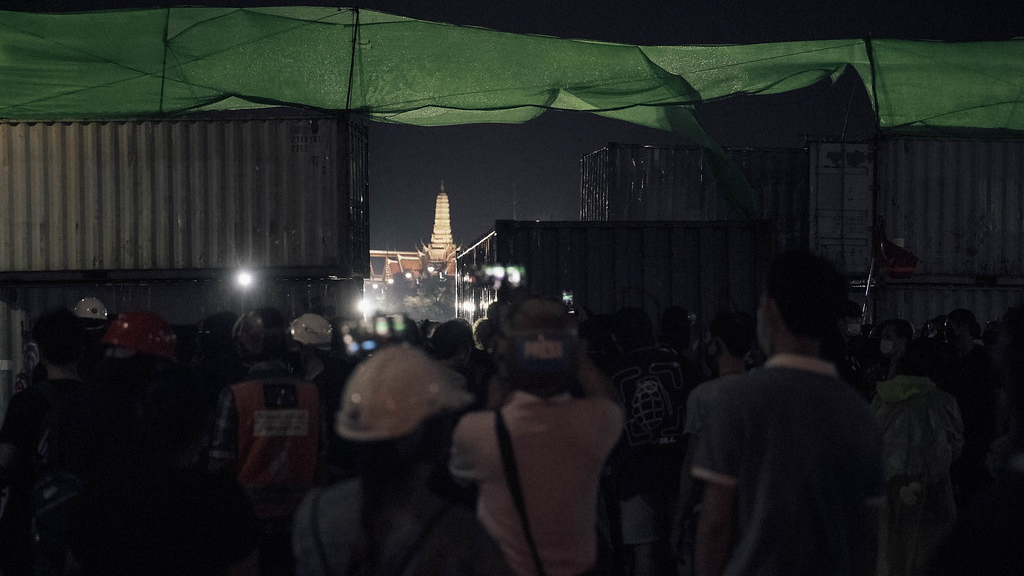 Protesters gathered at a protest rally in front of the Royal Palace on March 20, which was blockaded by cargo containers used as barricades by the police. Photo: Prachatai

A new wave of protests has swept Thailand with thousands hitting the streets every week. Major seats of power, including the prime minister’s office, the royal palace and the royal barracks that is under the control of the monarch, are some of the most common venues of demonstrations. Confronted with the thousands who are thronging the streets, the Thai government has unleashed a wave of repression unseen since the aftermath of the 2014 coup d’etat.

The contentious provision that is at the heart of the protests is Section 112 of the Thai Criminal Code or the lèse-majesté law. The law came into effect in 1908 when Thailand was still under an absolute monarchy, and criminalizes a broad range of actions concerning defamation or insult to the monarchy and the larger royal family.

While most monarchical systems, including constitutional monarchies limited by liberal democracies like the United Kingdom, have lèse-majesté laws in some form or the other, Thailand’s has been termed among the most sweeping and stringent of them all. This can be seen by the fact that a judicial precedent from the 1980s also prevents publication of ‘gossip’ and ‘rumors’ about the royal family, even if they are found to be true.

The accused often has to go through a lengthy prosecution process, in which bail is not the norm and more than a third of the cases are tried in military courts rather than civil courts. Moreover, the expansive and broad scope of the law leads to conviction rates of over 90%. Once convicted, the punishment can be between 3-15 years in prison for each count. In January, a 65-year-old woman was sentenced to 87 years in prison, which was reduced to 43 years after she pleaded guilty in the 2015 case when she was hit with charges during post-coup repression.

Over the past few decades, the law has more often than not been used vindictively against political activists, opposition groups and even those demanding checks on the finances of the royal family, especially during coups and the reign of various military juntas. According to a report by Prachatai, a spike in the number of lèse-majesté cases has often been one of the key reasons given by the military for the last two coups Thailand witnessed – in 2006 and 2014.

In 2020, after the first protests broke out demanding reforms in the criminal code, especially to either amend or strike down section 112, dozens have been slapped with the charges under the section. The ‘crimes’ range from from wearing royal traditional dresses of senior members of the royal family in a protest parade to even demanding changes to the lèse-majesté law itself.

According to iLaw’s Freedom of Expression Documentation Center, since the 2014 coup, 99 cases were documented to have been filed under section 112, some of which are still being investigated or tried.

By late 2017, shortly after the junta-authored constitution came into effect, the coup government of Prayut Chan-o-cha put in place an unofficial moratorium and later even changed the procedure of prosecution, which now requires the sanction of the attorney general.

In November 2020 after months of protests, the law was revived as an instrument of impunity, with 63 people charged since then, according to Thai Lawyers for Human Rights. Of these, 22 are currently facing a trial at a Criminal Court in Bangkok.

At the same time, this year also saw the return of rubber bullets as one of the methods used to quell or disperse protesters. The use of rubber bullets by the police was reported at least twice this year – on February 28 and on March 20. In both cases, dozens were injured. On March 20, the bullets also reportedly hit at least one minor and three journalists, all of whom wore identifiable media cards.

These instances are the first time that law enforcement has made use of non-lethal force on protests since it broke our last year, and the first such since instance since the political crisis of 2014.

In its statement admonishing the police for the use of rubber bullets on journalists on March 20, the Foreign Correspondents’ Club of Thailand (FCCT) pointed out how the police action contravened the UN guidelines on the use of non-lethal force, stating that at least one journalist had to have their head scanned after being struck by a rubber bullet.

Nevertheless, thousands continued to participate in protest rallies and demonstrations, which showed no indication of ebbing. The determination of the protesters is evident from the fact that even after a reported spike in COVID-19 cases and a government-declared emergency decree, the rallies are being held as planned, unlike in December when a surge in infections led to a hiatus.