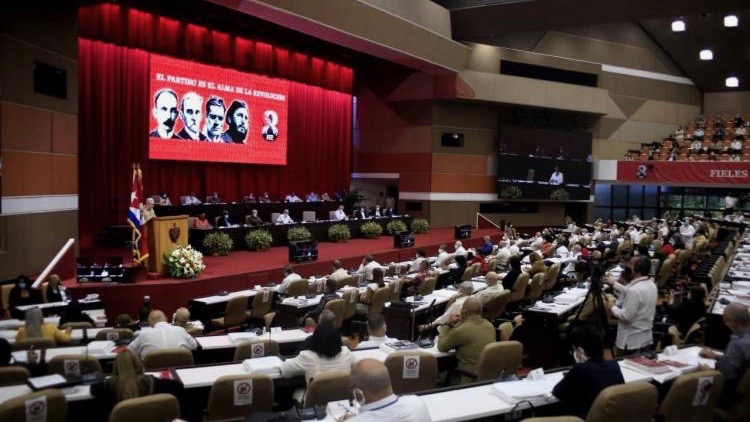 “To be invincible through unity and prevent the enemy from defeating us again because of our disorder.”

The Communist Party of Cuba (PCC) is getting ready to celebrate its 8th Congress in April. Its premise are these words by José Martí and the idea that the continuity of the Revolution requires, as the natural order of things, the passing of the baton to the younger and committed generations of cadres. This Congress takes place amid a complex economic panorama, exacerbated, on the one hand, by the COVID-19 pandemic and, on the other, by the unprecedented resurgence of the United States blockade.

It has been determined as the Congress for the Historical Continuity of the Cuban Revolution. It will be a key one for the Party and the country, since what will emerge from it – in addition to influencing the economic, political, and social life of the country – will define the strength of the “continuity and irreversibility” of the Cuban revolutionary process, as the leadership of the Party has called it.

Among the most striking aspects of this party congress is the departure from its leadership of several members of the so-called “historical generation,” such as Raúl Castro, current First Secretary. He has been a determining figure in the process of change that is looming within the Party –because if time does not hold surprises, it will be President Miguel Díaz- Canel who is elected the new First Secretary. In short, it will be the Congress of change in leadership.

This process of change has been thought out in full detail. Raúl Castro himself, during the 7th Congress in 2016, proposed a maximum of two terms for senior positions in the State and the Party, paving the way for the passing of the baton to the new generation of Cuban communists. It was just action, but above all necessary, because if the continuity of the Revolution depends on something, it is on its ability to gradually transfer the country’s leadership and the Party, from the hands of the historical generation to the new generation of cadres and leaders.

Comandante Fidel Castro already said it in 1997, during the 5th Congress of the PCC: “The Party cannot afford that one day its leadership fails because the price is unpayable.”

In the lead up to this 8th Congress, with the slogan: “to build an increasingly prosperous and sustainable socialism”, many hours of hard work were put in.

Ahead of this Congress, the delegates, who were elected at the beginning of last March from a list of candidates proposed in meetings at the end of 2020, carried out in each province the study sessions and analysis of the documents that will be submitted for debate and evaluation in the commissions of the Congress between April 16 and 19.

These documents are the result of a process of evaluation and consultation carried out by the Party’s provincial leadership bodies and the political and mass organizations of workers, peasants, youth, and women during the year 2020. They address in detail how the actions approved in the 7th Congress have been implemented up to now, taking into account the current economic and social conditions, including the difficulties and challenges facing the nation today.

The Congress will focus its attention on core issues for the present and the island’s immediate future, from the Conceptualization of the Cuban Economic and Social Model of Socialist Development, the updating of the implementation of the Guidelines, to the economic and social results obtained since the previous Congress. The Party’s functioning, its connection with the masses, and ideological activity will also be discussed.

How to overcome inefficiencies, structural problems in the economy, and strengthen local productive systems based on autonomy in the municipalities, are also topics to be discussed.

Youth as a continuity of the Party and the country

There is a lot at stake in the process. The time has come for the Cuban Revolution to demonstrate that it has reached sufficient maturity to survive its “historical leadership” and that the bases it created can guarantee “the irreversibility of socialism.” For this, the choice of new cadres is essential, committed to “the process” and tempered to reality and the effort of the times ahead.

In an exchange with delegates from Havana, President Miguel Díaz-Canel has insisted on the need to avoid schematics in the management of cadre politics, as well as on the care that is imperative to have “so that no one occupies a responsibility without a trajectory that demonstrates their capabilities, without a transition stage that has served as prior training.”

Along the same lines, much has been said about the relevance of finding in the core of the PCC a composition of skin color, gender, and age “that corresponds to the characteristics of Cuban society.”

However, it is imperative to have “a sustained increase in the promotion of women, Blacks, Mulattoes and young people, based on the merits, results and personal qualities.” Although progress is observed in this area in general terms, the leadership of the PCC has recognized that “what has been achieved in the fundamental positions is still insufficient, and that purpose is not obtained in various entities of the State and Government.”

Having said this, the new tutelage of the Party will arrive during a moment that carries with it different obstacles and complex conditions. Without going any further, a resurgence of the US blockade that, together with the COVID-19 pandemic, has hit the island hard and has caused the future to be viewed more with skepticism than hope within some sectors of the population.

In addition to this, there is the complexity faced by the Ordering Task itself, in force in Cuba since last January 1 and which contemplates an adjustment of the economic plan and the creation of a social and economic development strategy that aims to improve the situation of the country for the next few years. A very flowery measure, but three months after its implementation, it has faced many obstacles.

However, the 8th Congress of the PCC, which will begin just 60 years after the Revolution was declared socialist and will end on the anniversary of the victory in Playa Girón – dates loaded with symbolism for the times that run – will have to find answers that will alleviate the most pressing problems of Cuban society.

The PCC, historical legacy of unity and sovereignty

It was on August 16, 1925, when Carlos Baliño, a close collaborator of José Martí, together with the important figures like Julio Antonio Mella and Rubén Martínez Villena, founded the first Communist Party of Cuba. This has been considered the defining political moment for Cuba’s national identity during the first half of the 20th century.

However, its ideological base goes back to those first projections of anti-colonial and anti-imperialist unity of the Cuban struggle for independence. This would later be outlined, with greater clarity, in the program of the Cuban Revolutionary Party (PRC), created by Martí in 1892. The idea of ​​the cohesion of a people around the need for emancipation and sovereignty – as non-negotiable concepts of Cuban nationality – set the foundation on which the current Communist Party of Cuba would eventually be built.

Within the ideas of Baliño was a whole program of demands and organization for workers and peasants, the struggle for the rights of women and youth, and a commitment to improving the working conditions of the Cuban people. That first endeavor would be a failed effort at that moment, but the seeds of the idea had already been laid on fertile ground.

Coming down from the Sierra Maestra in 1959, the guerrillas, led by Fidel Castro, materialized the need for the dissimilar forces opposed to the Fulgencio Batista dictatorship to close ranks in the face of hostility from foreign forces. On October 3, 1965, the Central Committee of the new Communist Party was constituted.

According to the new Constitution, approved by the National Assembly and endorsed by the majority vote of Cubans in 2019, the Communist Party maintains its status as “the superior leading political force of society and the State.” It is in charge of organizing and guiding “the common efforts towards the high objectives of building socialism and advancing towards a communist society”.

In the words of Raúl Castro, “… only the Communist Party, as an institution that brings together the revolutionary vanguard and a sure guarantee of the unity of Cubans at all times, can be the worthy heir to the trust placed by the people in their leader.”

Today, 56 years after its Constitution and more than a century after the germination of its ideas, at a time when the country faces new economic and social challenges, with an attempt at destabilization encouraged from outside and with the uncertainty that always opens up to the changes – no one should be fooled – the PCC is committed to preserving and strengthening the unity of its bases and that of the people around the Revolution, while renewing the faces that will lead the country in the coming years.

To the criticism of those who point to the existence of a single party in Cuba as an alleged example of a lack of democracy, José Ramón Machado Ventura, current Second Secretary of the PCC responds: “A single party, as Martí preached. Because in the face of imperialism’s dreams of fragmenting our society and dividing it into a thousand pieces, our main shield is unity. And it is the Party, the organized vanguard of the people, who ensures, together with it, the historical continuity of the Revolution.”