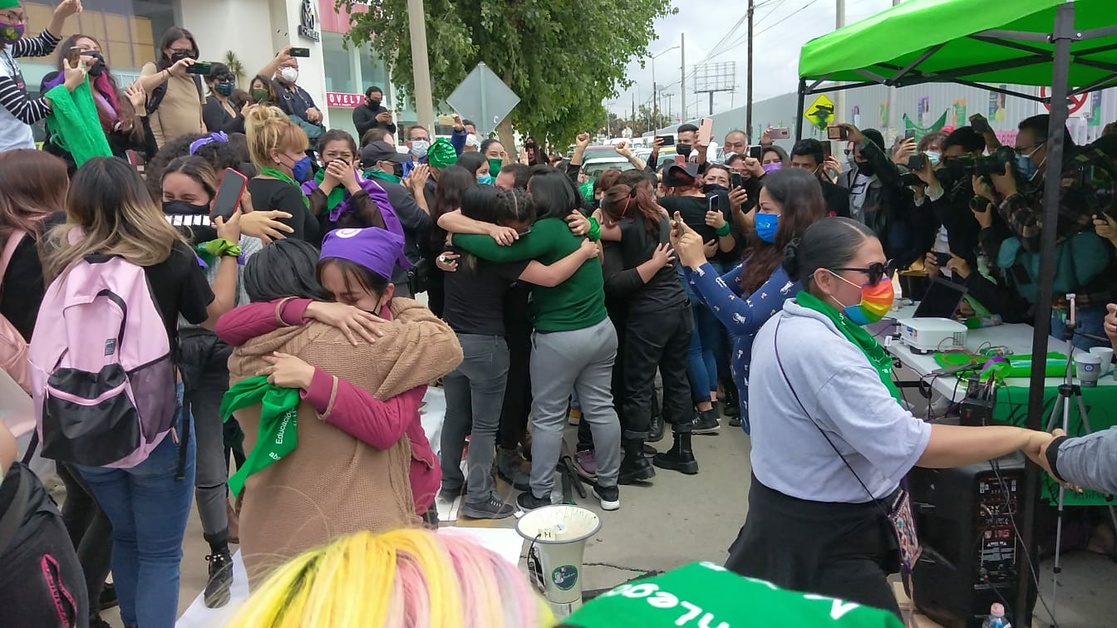 Feminists celebrating the decriminalization of abortion outside the Hidalgo Congress on June 30. Photo: Ricardo Montoya/La Jornada

On June 30, the Congress of the Mexican state of Hidalgo, with 16 votes in favor and 14 abstentions, approved the Legal Termination of Pregnancy (ILE) bill and decriminalized abortion during the first 12 weeks of gestation. With the historic decision, Hidalgo becomes the third state after Mexico City in 2007 and Oaxaca in 2019 to legalize elective abortions.

The legislators who voted in favor of the reproductive rights of women all belong to the ruling National Regeneration Movement (Morena) party. The 11 lawmakers from the National Action Party (PAN) and Institutional Revolutionary Party (PRI) explicitly opposed the bill and refused to participate in the voting process. One Morena lawmaker formally abstained, while two other members of the 30-seat unicameral Congress were absent.

Morena’s legislator and the main promoter of the bill, Victor Osmind Guerrero Trejo, saluted the result. “This Legislature will go down in history for recognizing women’s rights to decide on their bodies, through a bill, supported in scientific, legal and ethical terms, backed by the World Health Organization, to decriminalize abortion,” said Guerrero Trejo.

“We are not child murderers. With this law that has just been presented, it is intended to save the lives of girls and women whom we have no right to force to be mothers, much less to put them in jail for terminating their pregnancy. Whatever their decision is, we, men, should not even pass a judgment,” he added.

Guerrero Trejo tried to get the initiative approved in 2019 for the first time, but he failed to receive the support of the majority of the legislators.

As soon as the decision was announced, the feminists and women activists, who had set up a camp outside the Congress building since Tuesday night, erupted with joy. The decision was hailed by women and human rights organizations across the country and the Latin American and Caribbean region.

Marea Verde, the network of feminist collectives in Mexico, whose members held a vigil outside the Congress, celebrated the approval of the law. “Hidalgo has just approved the law for the right to decide. Abortion is law in Hidalgo,” wrote Marea Verde in a tweet.

The Information Group on Reproductive Choice (GIRE), a reproductive rights group, also applauded the ruling. “One more state in favor of freedom and justice for women. The green tide rises and we’re all very happy,” tweeted the group.

The National Institute of Women (Inmujeres) considered the resolution a triumph for the feminist movement. “Inmujeres celebrates Hidalgo as the third federal entity that approves the decriminalization of abortion. For the right to decide, for women’s sexual and reproductive rights, let’s keep moving forward! Motherhood should be desired,” wrote the organization in a tweet.

The Latin American and Caribbean Women’s Health Network also welcomed the decision. “We applaud the struggle of all women and feminists who made it possible for abortion to be law in Hidalgo today,” the network tweeted.

Olga Sánchez Cordero, the Secretary of the Interior, expressed her approval by saying “Motherhood will be desired or it will not be.”

Senator and founder of Morena, Bertha Caraveo, congratulated the state and said “Sex education to decide, contraception to avoid abortion, legal abortion to not die. Congratulations to Hidalgo”

The Undersecretary for Human Rights, Population and Migration, Alejandro Encinas, also greeted the approval of the reform, “For the right of women to freely decide on their bodies.”

In Mexico, abortion is legal only in case of rape. Some states also allow abortion in other cases such as serious risk to the woman’s life, fetal malformation, non-consensual artificial insemination and financial hardship.

However, in the majority of the country, like the majority of the region of Latin America and the Caribbean, the access to the fundamental human right is severely restricted. In recent years and especially after the achievement of this integral right in Argentina in December 2020, the feminist groups across the region have become more vocal and persistent in their fight for this right and all the others.

Every year, in Mexico, thousands of clandestine abortions are performed in unsafe conditions. With the approval of the law, thousands of girls, women and gender diverse people will benefit as the restrictions are withdrawn and the right to life, health and choice is legally guaranteed.

The feminist activists and collectives have vowed to continue fighting until the right is proclaimed in all the 32 states of the nation.