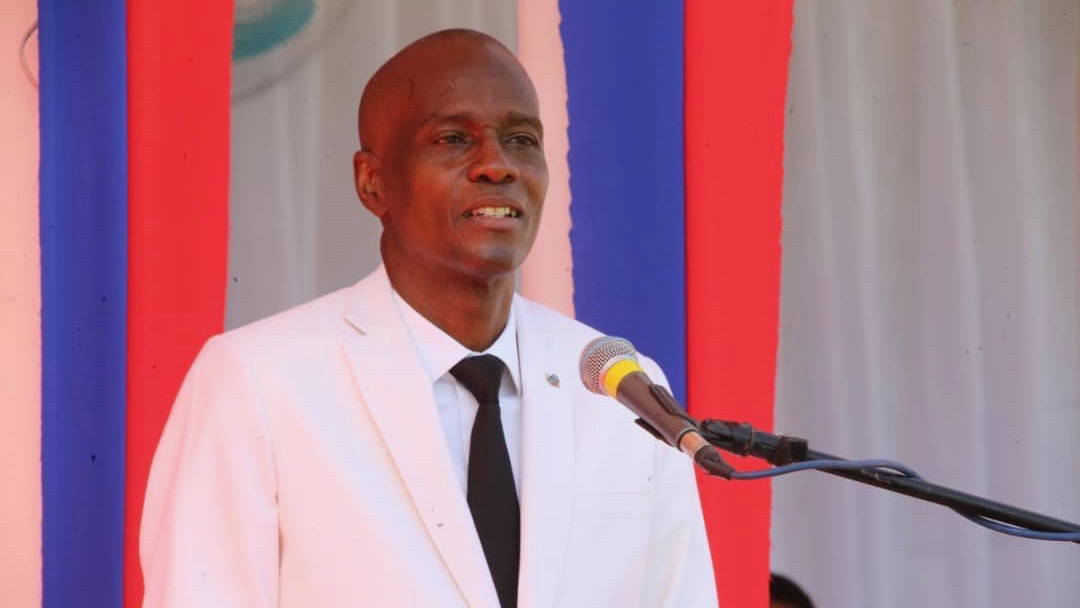 In the early hours of July 7, unidentified armed men attacked the house of Haiti’s de-facto president Jovenel Moïse and shot him dead. In the attack, his wife was also severely injured and according to reports she has been hospitalized in Miami, Florida. Haiti’s interim prime minister, now acting president, Claude Joseph, confirmed the news in the early morning and declared a 14-day state of siege. Joseph assured that the “security situation of the country is under control” and called on the citizens to remain calm.

In the evening, the secretary of State Communication, Frantz Exantus, reported that two suspects in president’s assassination had been arrested by the national police in the afternoon in Pelerin.

Hours later, in a press conference, the director of the Haitian National Police (PNH), León Charles, informed that the police confronted with the alleged commando group responsible for the assassination in the immediate vicinity of Moïse’s residence in Pelerin. He confirmed that the police captured two of the presumed assassins and killed four others. “The PNH blocked the road that could allow the mercenaries to flee. Some of them had taken refuge in Pelerin, four were killed in shootings, two were arrested, and three policemen taken hostage were rescued,” said Charles.

Meanwhile, Claude Joseph reported that he held a meeting with the Core Group, composed of the ambassadors of Brazil, Canada, France, Germany, Spain, the European Union, the United States of America, as well as representatives from the United Nations and the Organization of American States. He also informed that he spoke for 30 minutes with the US Secretary of State, Antony Blinken, about the assassination and the political crisis.

Haitian civil society organizations and other progressive sectors have expressed concerns about these meetings. They warned that Moise’s assassination could be used as pretext to increase foreign interference and further deepen the socio-political crisis in the country. They condemned that the Core Group has its own economic and geostrategic interests in the country. They recalled that it supported Moïse’s illegitimate government, whose presidential term constitutionally ended on February 7, 2021, as well as his unconstitutional plans to hold legislative and presidential elections and a constitutional referendum on September 26, 2021, despite the widespread popular rejection.

In a statement, Jubileo Sur / Americas, a network of social movements, people, ecumenical, women’s and human rights organizations, political formations, campaigns in Latin America and the Caribbean, condemned Moise’s assassination and highlighted that “the democratic struggles of the Haitian people during the last years were peaceful struggles.” The organization stressed that although “there is no clear information about the origin and nature of the command that killed him, everything seems to indicate some complicity and/or participation of the security forces of the presidency.”

Jubileo Sur / Americas emphasized that “it is important to prevent a new military occupation and reject the option of the occupation of multilateral forces which have already shown that their presence exacerbated the Haitian crisis and are responsible between 2004 and 2015 for serious crimes against Haiti and multiple violations of the basic rights of the nation.”

Likewise, Social Movements of Alba, also stressed that Moïse’s murder must not be the excuse for a new intervention in Haiti. “The peoples of our America, we do not cry for the executioners of the people, but we do warn about the possible scenarios that can be unleashed with this assassination for the benefit of the imperialist interests, who live off the generation of chaos as the main strategy of domination. The memory of the Haitian resistance take us back to the time in history when in 1915 after the assassination of President Vilbrun Guillaume Sam, the US army invaded Haiti. Will they be repeating their strategy?” pointed out ALBA in a statement.

With regard to Moïse’s murder, ALBA said that it “is one of those cases where violence turns against its original generator.” “For months, Haiti has been experiencing a spiral of violence that seeks to stop and repress the popular uprisings that have been permanently maintained during the last 4 years. According to state entities and national and international human rights organizations, there have been 12 massacres, 234 kidnappings (UN), 10,000 displaced persons, and more than 76 armed groups have been identified. To these figures were added 15 new murders at the end of June,” added the organization, highlighting the alarming levels of insecurity in the country.

The Haitian government has decreed a national mourning until July 22 and has closed its airports and the land borders. The stage of siege has also been ratified for 15 days, which suspends several constitutional guarantees and rights. While it is in force, people must remain in their homes. The authorities may conduct searches at homes, prohibit meetings and establish special security measures according to the situation.

With reports on the ground from Lautaro Rivara.

How has the US changed since 9/11?
RECENT ARTICLES