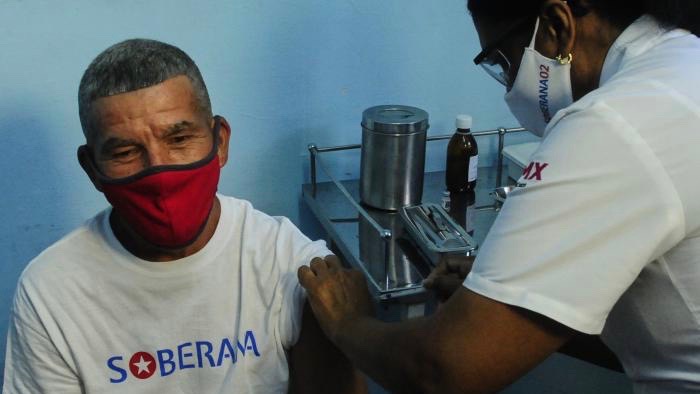 Cuba’s anti-COVID-19 vaccine candidate, Soberana 02 of the Finlay Vaccine Institute (IFV), showed 91.2% efficacy with a third booster shot of Soberana Plus during the third phase of clinical trials. The news was announced by the IFV and the state-owned pharmaceutical company BioCubaFarma, on July 8.

Last month, on June 19, the IFV scientists reported that Soberana 02 showed 62% efficacy with just two doses. The news was celebrated across Cuba since the locally developed vaccine candidate exceeded the 50% efficacy threshold required for approval by the World Health Organization (WHO) with partial results of its efficacy study.

This morning, Cuban President Miguel Díaz-Canel celebrated the news and congratulated Cuban scientists. “In the midst of very difficult days, we received the great news of Soberana 02 and Soberana Plus’s efficacy: 91.2%. What a tremendous impulse to continue fighting for life! Thanks to our scientists for fortifying our hope,” tweeted the head of state.

The phase 3 clinical trial for Soberana 02 began in the capital Havana on March 4, with 44,010 volunteers between the ages of 19 and 80. They were administered two doses of Soberana 02 and a third booster shot of Soberana Plus at an interval of zero, 28 and 56 days. The vaccine also showed efficacy against Beta and Delta variants of the coronavirus.

With this historic achievement, Cuba’s two out of the five vaccine candidates, Soberana 02 and Abdala, are among the top 5 most effective vaccines worldwide. Abdala of the Center for Genetic Engineering and Biotechnology (CIGB) showed 92.28% efficacy with three doses during the third phase of clinical trials.

Both the vaccines have been approved by the country’s Center for State Control of Medications, Medical Equipment and Devices (CECMED) for clinical trials in children. The pediatric trials with Soberana 02 and Soberana Plus have already begun in the country. Around 350 children and adolescents are participating in the trial. The trials with Abdala will begin in mid-July, with 592 children and adolescents.

The country aims to inoculate its entire adult population of over 11 million people by the end of the year. If Cuba succeeds in doing so, it will become the first country in the world to have vaccinated its entire population with its own vaccines.