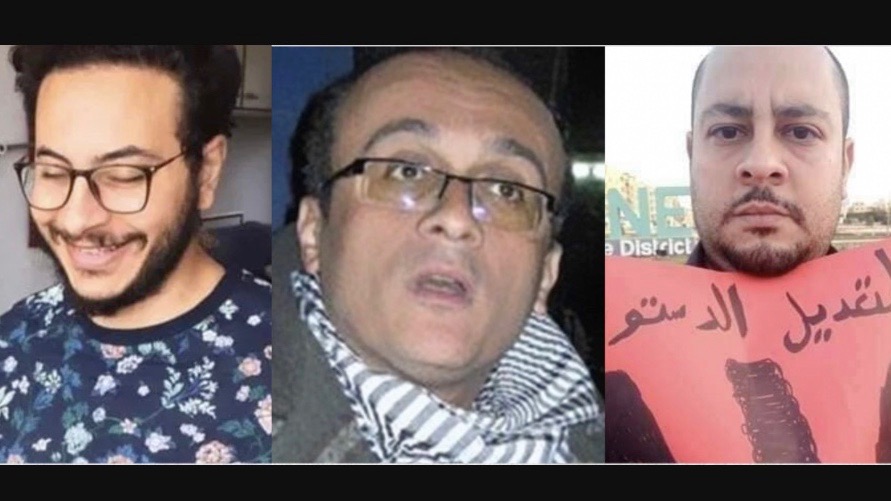 On Tuesday, July 13, several prominent public personalities in Egypt announced plans to launch hunger strikes in solidarity with political prisoners in the country and to protest against illegal and arbitrary detentions. A few of the political prisoners have themselves embarked on hunger strikes in the last few weeks to protest their detention. Hundreds of political prisoners in Egypt are being detained under dubious charges such as forming an illegal group, spreading false news, and joining a terrorist group, among others. Several of them have been forcibly kept under detention by the Egyptian authorities for over the legally allowed two-year limit.

Among the public figures who announced solidarity hunger strikes are journalist Karim Yehia, co-founder of the Al Nadeem Center for the Rehabilitation of Victims of Violence and Torture, Aida Seif al-Dawla, and director of the Cairo Institute for Human Rights Studies Mohammed Zaree. Yehia had yesterday announced on his Facebook page plans to start a hunger strike in support of imprisoned journalist Hisham Fouad. He said in his post, “I launched this sit-in and strike for the freedom of Hisham and dozens of my fellow journalists, detainees and prisoners of conscience of all stripes,” and extended solidarity to the thousands of other political prisoners being detained by the authorities.

Fouad himself launched a hunger strike on Saturday last week after his detention surpassed the two-year legal limit after a judge extended his detention for another 45 days – the 25th such extension since his arrest in 2019. Fouad’s lawyer said that he officially announced his hunger strike on Sunday during the detention renewal session. His lawyer also asked for Fouad to be admitted to the prison hospital to keep a check on his health and physical well-being. Fouad has been targeted and judicially persecuted under the Coalition for Hope case in which the government went after the opposition political group with charges such as “forming a group in violation of the law that aims at suspending the constitution and law”, “preventing state’s institutions and public authorities from conducting their duties” and “spreading false news and information on the political and economic situation in Egypt with the purpose of undermining public peace and trust in state’s institutions.” The government is accused of targeting the Coalition for Hope in order to prevent it from running in the 2020 parliamentary elections.

Al-Dawla and Zaree announced plans to observe a one-day hunger strike in solidarity with Fouad, imprisoned graduate student Ahmed Samir Santawy, political activist Ahmed Badawi, and all the other political prisoners in Egypt. Santawy has been on hunger striketo protest against a four-year prison term slapped on him by an Emergency State Security Court. He had been accused of “publishing false news from outside the country about internal affairs.” Badawi started his hunger strike on June 5 after his remand detention went past the two-year legal limit.

Both the detainees were subjected to enforced disappearances by the Egyptian security forces and subsequently charged with various criminal charges related to national security and terrorism. Santawy was also previously questioned by the authorities about his thesis on the subject of abortion and Islam when he returned to his native country for vacation on December 23, 2020, from Austria where he was studying for his Master’s degree. The National Security Agency raided his home on January 23 this year, and on February 1, he was abducted after he arrived at their office in response to summons received from the agency. He was subsequently placed in remand detention on the basis of the charges against him.

Badawi went through enforced disappearance over two years ago in April 2019 while he was holding a sign reading “No to the constitutional amendments” in one of Cairo’s public squares to protest against the government’s proposed amendments in the middle of the voting period. He was presented before the State Security Prosecution a week after his abduction and charged with “joining a terrorist group” and “using an account on social media networks to commit a legally punishable crime that would pose a threat to the safety and security of the community.” He was ordered into remand detention and has been in prison since.

Close to 60,000 political prisoners are currently being detained by the Egyptian government headed by military dictator-turned president, Abdel Fattah el-Sisi. A massive and systematic campaign by successive governments spanning almost a decade has tried to crush all opposition and dissent in the country. The government has also cracked down on human rights defenders, journalists, academics and others involved in fighting for basic political and civil rights such as freedom of press, freedom of speech and expression, free and fair elections, and the right to dissent and criticize the government.