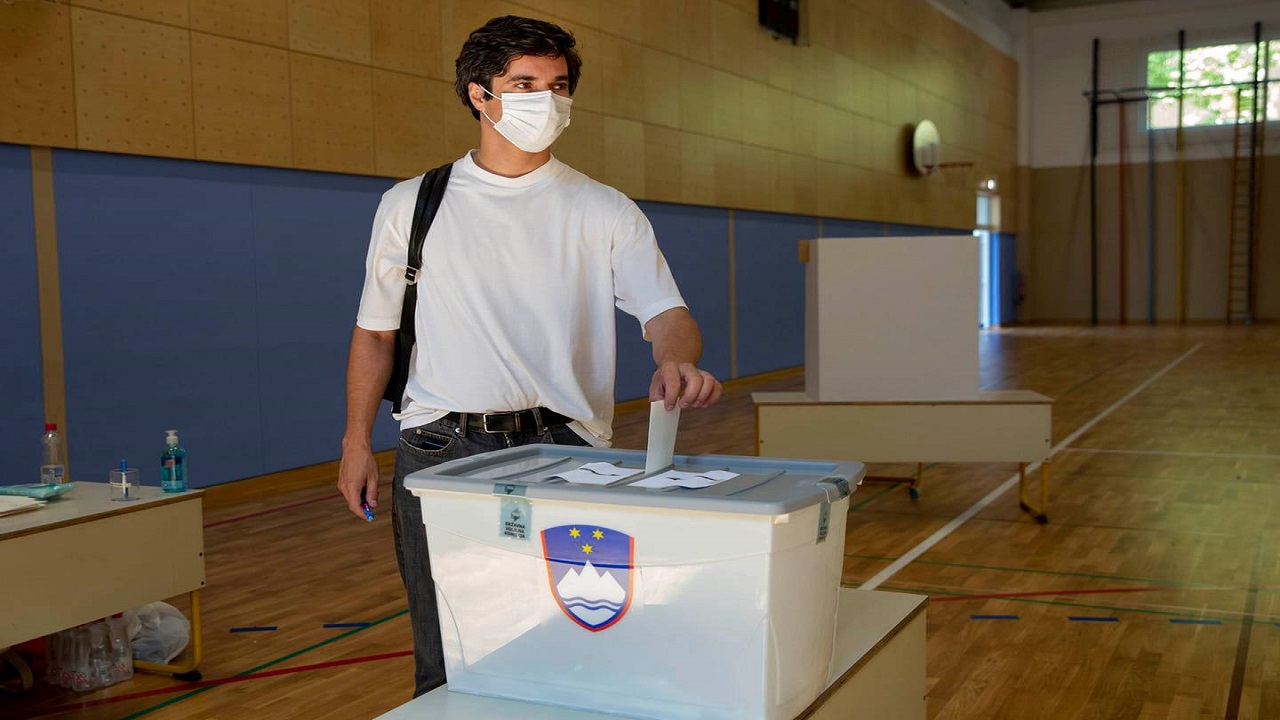 Luka Mesec, MP from Levica, casts his vote in the referendum on Sunday. (Photo: Facebook)

On Sunday, July 11, Slovenian citizens voted in a national referendum to reject the amendments proposed by the government to the existing water conservation law. The results came as a major blow to the right-wing government led by Janez Jansa. The historic referendum saw the participation of 46.15% of the total electorate. 677,119 (86.60%) people voted against the government’s proposal and only 104,793 (13.40%) voted in its favor.

On March 31, the right-wing dominated Slovenian parliament had passed the amendments to the Water Act, making way to lift restrictions on massive construction projects near water bodies across the country. Those opposing the amendments warned that the move would promote uncontrolled construction in coastal areas, leading to environmental degradation of coastal regions and increasing risk of pollution in surface and underground water bodies. Leftists and environmental activists also accused the government of opening the doors for capital to intervene at desired locations, despite the fact that the waters and coasts in Slovenia have been declared as public goods and public spaces.

After the amendments were passed in the parliament, various civil society groups, environmental activists, and NGOs like the Eco Circle Society, Civil Initiative TODAY, Young People for Climate Justice and Balkan River Defence formed the “Movement for Drinkable Water” and collected more than 50,000 signatures with the support of progressive political parties, including the Slovenian Left – Levica. They demanded a national referendum on the issue.

After the results of the referendum were announced, sociologist Jo žee Vogrinc opined that “a new place of freedom has opened, where we are re-determining what the fundamental problems of today’s society are, we are dealing with them and thinking about them in a new way. This referendum result is a strong pressure on organized political forces to ask themselves what they are doing. Do they even deal with what people most do?”

Luka Mesec, MP from Levica, congratulated the people of Slovenia for their victory in the referendum and said that it was primarily a victory for nature, public good, and drinking water. “Today in Slovenia, a pair of government politicians in dark blue suits and brown shoes try to privatize even those parts of Slovenia that have remained intact so far. On the other hand, the democratic front of the professional, civil society and opposition is united. With more than 85%, we showed what kind of society we want to live in: a society where democracy and arguments prevail, where we work hand in hand, not in a society where the government is at war with everyone,” he added.

Earlier, when the Citizens Initiative for the referendum on the Water Act was being launched, Levica had said, “we join the initiative for referendum against interventions in the Water Act. Because we are not strong enough to prevent the law in parliament, it is necessary that residents of Slovenia decide about the controversial fencing of access to surface water.”

The Slovenian left and environmental groups had earlier also protested the amendments by the government to the Nature Conservation Act, which placed hurdles on organizations trying to attain the status of a nature conservation organization in public interest. The government’s move was widely viewed as a step towards the sale of the country’s resources.

Slovenian Press Agency reported that according to political analyst Andraž Zorko, the rejection of the amendments to the Water Act is a vote of no confidence in the government by the people, who have succeeded in doing what the opposition had failed to do in parliament. “The high turnout in the referendum is an indicator of topics that may feature prominently in future elections. The high turnout of youth in the polling booths means that politics in general, not just this government, will have to change its approach to legislation,” he said.

Even though prime minister Jansa said on Monday, July 12 that a defeat in the water referendum was no reason to quit, the results have further weakened the legitimacy of his right-wing coalition government. Jansa’s government has been widely criticized for attacks on activists, cultural workers, NGOs, intellectuals, and the media. The government has also received widespread criticism for its bid to increase military spending instead of strengthening public healthcare during the COVID-19 pandemic, and for its attack on workers rights.