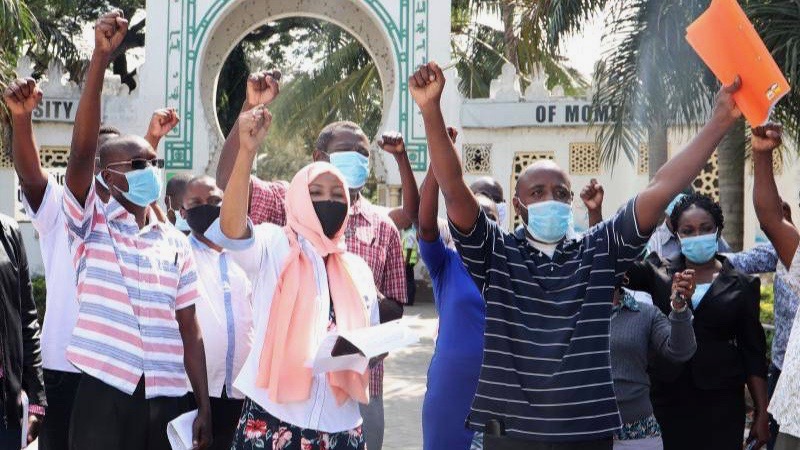 The Universities Academic Staff Union (UASU) of Kenya has announced the suspension of strike action by professors that was scheduled to begin on Monday, August 30. The professors were protesting the failure of public universities to honor the 2017-21 Collective Bargaining Agreement (CBA). Their withdrawal of labor could have resulted in a stoppage of teaching in Kenya’s 35 public universities, a week before most of them are set to begin the academic year.

Following the meeting on August 29 with Principal Secretary for University Education and Research, Simon Nabukwes, the decision was made to suspend the strike notice “to give a final chance for dialogue,” secretary general of UASU, Constantine Wasonga, said in a statement.

The National Implementation Committee (NIC) has agreed to UASU’s demand for an audit of how the public universities have spent the amounts released by government for the implementation of 2017-2021 CBA. The NIC is the body under whose auspices the union has been negotiating with the employers’ body, the Inter-Public Universities Council Consultative Forum (IPUCCF).

This agreement, costing Sh 8.8 billion (USD 80 million) upon full implementation, was negotiated in 2019 and registered in 2020. It had assured wage adjustments (retrospectively in the form of arrears clearance for the period between 2017-2020 before the agreement was in effect) for 30,000 workers from three unions. These were the UASU, Kenya University Staff Union (KUSU) and Kenya Union of Domestic, Hotels, Educational Institutions, Hospital and Allied Workers (KUDHEIHA).

The government had released an amount of Sh 6.6 billion (USD 60 million) in May 2020 to the universities as a first installment towards the implementation of the CBA, and the remaining Sh2.2 billion (USD 20.02 million) being disbursed in monthly installments.

However, only seven of these universities have fully implemented the salary hike and cleared the arrears as per the commitment given in the CBA. The implementation in other universities has been disparate. This has caused a situation where lecturers in the same grade, doing the same work, are receiving unequal pay in different government universities.

“Most public universities did not pay in full the arrears accruing under the 2017-2021 CBA and retained a balance of funds or utilized the balance to pay vice-chancellors, their deputies and other management staff who were not covered by the CBAs,” Wasonga and the union’s chairperson, Grace Nyongesa, had alleged in a petition to the national assembly earlier this month.

Daily Nation reported that Kenyatta University had retained the largest amount, to the tune of Sh 330 million (USD 3 million), followed by 21 other universities. 13 universities have not even filed their returns to the National Implementation Committee, which is in charge of overseeing the payments.

In a press conference on August 20 when the strike was announced, Wasonga had said that the government and the IPUCFF “are in contempt of court. On January 15, the Employment and Labour Relations court ruled that the 2017-2021 CBA be implemented as was negotiated.”

The chairperson of the universities’ vice-chancellors had earlier called on the union to sympathize with the financial difficulties the universities are facing,  Responding to this appeal, Wasonga said in the conference, “If there is no money then resign from those positions. It is not the responsibility of UASU to source for funds, ours is to negotiate.”

Defending the universities’ handling of the CBA, the secretary of the Salaries and Remuneration Commission (SRC), Anne Gitau, had written in a letter to the Principal Secretary of University Education, Simon Nabukwesi, that “public universities [had] paid annual salary increments to their staff amounting to Sh 5.8 billion (USD 53 million) between months of July 2017 and June 2020.”

Accusing the SRC of misleading by showing expenditure on salary increments that were given prior to the CBA, Wasonga had asked, “If SRC claims that annual increment payments started in July 2017 even before the CBA was signed, whom are they fooling?”