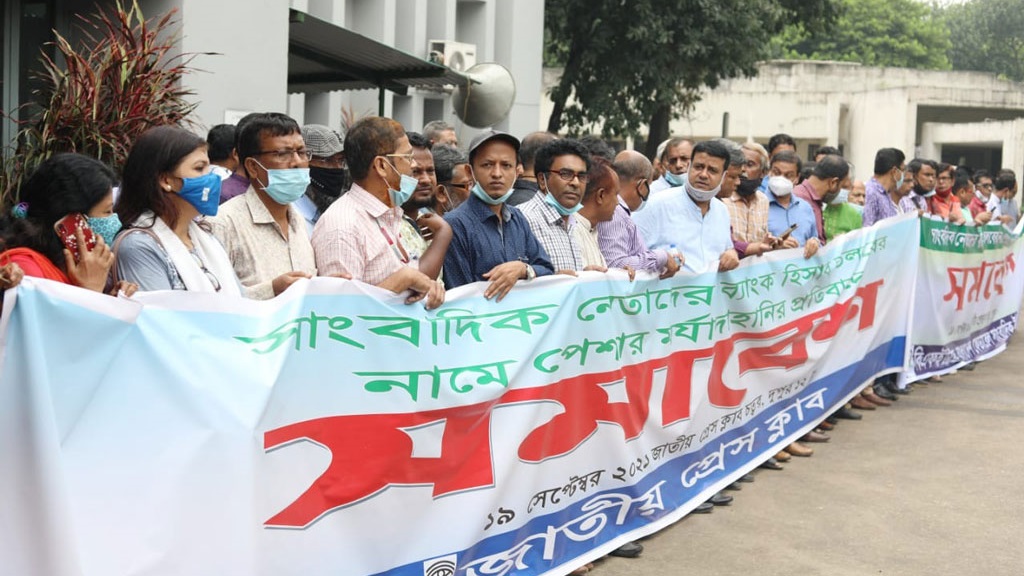 Journalists’ unions in Bangladesh have condemned a recent demand by state agencies for the bank details of at least 11 senior journalists. They have called it an act of state intimidation. Journalists will stage a countrywide protest on Thursday, September 23.

The president and general secretary of Jatiya Press Club, Farida Yasmin and Elias Khan, president of the Dhaka Union of Journalists, Kader Gani Chowdhury and office- bearers of the other organizations are among those who have been asked to provide their bank details by the Bangladesh Financial Intelligence Unit.

“The state can seek bank account details of any citizen. But the way the information was sought, targeting a specific group, is part of a deeper conspiracy and seems ill-motivated,” Bangladesh Federal Union of Journalists president Mollah Jalal said on that day.

Farida Yasmin of the Jatiya Press Club asserted that certain sections within government agencies are trying to tarnish the images of the journalists in the country.

As per the organizers, the protests on Thursday are likely to take place at press clubs, government buildings and public squares.

Unions consider this step to be an attempt to pressurize independent journalism. Writing in the Prothom Alo, senior journalist Kamal Ahmed said that “the step is a reflection of the government’s unease and discomfort.” He added, “Zero tolerance against criticism of the government is now rearing its head. For some time now the ministers and ruling party leaders have been terming any criticism on social media as smear campaigns and have declared war against such criticism.”

In May, journalist Rozina Islam was confined in the health ministry and later jailed for a few days. She was booked under the Official Secrets Act for theft and photographing of sensitive state documents from the Health Ministry. Rozina was then released on interim bail even as international press and human rights organizations urged an end to proceedings against her.

“She has faced the ire of bureaucrats for reporting on the corruption and irregularities in the health sector during corona times,” Ahmed noted.

Bangladesh authorities have also invoked the controversial Digital Security Act against dissenting voices and opposition figures. Cartoonist Ahmed Kabir and journalists Tasneem Khalil, and Shafiqul Islam Kajol are among those facing proceedings under this draconian law. Some of the accusations include spreading fake news, creating enmity between communities etc.

Amnesty International reported at least 800 cases against journalists in the first nine months of 2020 alone. Bangladesh has slipped one rank in 2021’s World Press Index which is published by Reporters Without Borders (RSF) report. It is ranked 152 among 180 countries.