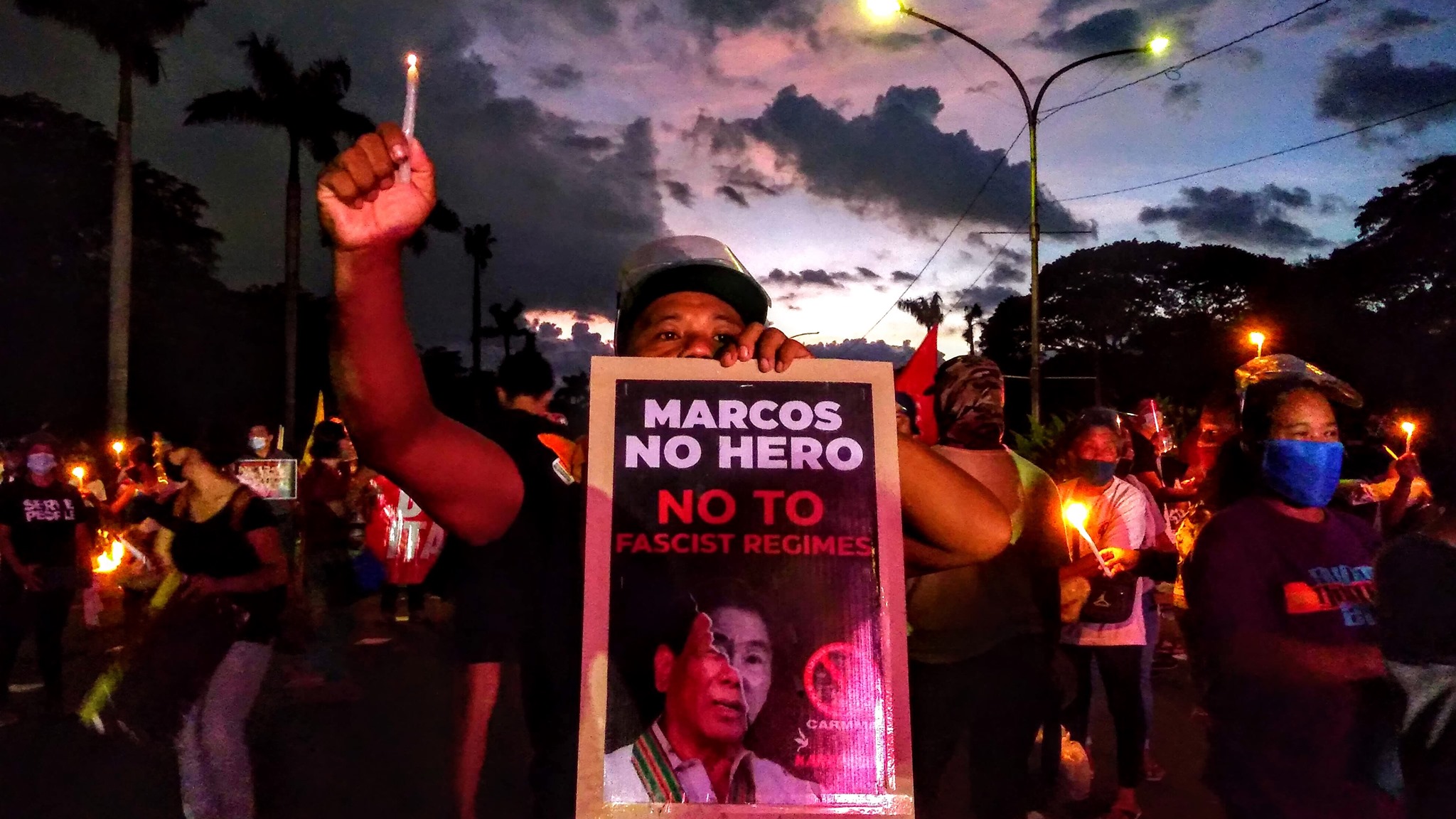 A scene from the protests in the Philippines on Tuesday. Photo: Karapatan/Facebook

Thousands participated in demonstrations across the Philippines to commemorate the 49th anniversary of the Martial Law in 1972 and the 14-year long dictatorship that followed it. Human rights groups and activists organized demonstrations in the Manila metropolitan region, and other parts of the country on Tuesday, September 21, on the official anniversary of the Martial Law declaration by former president and dictator Ferdinand Marcos.

Manila was the epicenter of the commemoration as thousands congregated from different parts of the country. The rally was organized by groups like In Defense of Human Rights and Dignity Movement (iDEFEND), Karapatan, Bagong Alyansang Makabayan (BAYAN), Sanlakas, Philippine Alliance of Human Rights Advocates (PAHRA), Partido Lakas ng Masa (PLM), and Bukluran ng Manggagawang Pilipino (BMP), among others.

Regional chapters of organizations like Sanlakas, PAHRA, and PLM also organized similar demonstrations in places affected by political violence in the past few years, especially in Cebu, Calabrazon, Negros and in parts of Mindanao.

The Martial Law commemorations are held by political groups and civil society organizations to remember the people’s struggle against dictatorship and state terror under the Marcos regime. Marcos had announced the martial law decree on September 23, after seven years of serving as the nation’s president. The official declaration was backdated to September 21, over Marcos’ superstitious beliefs regarding the number ‘7’.

Faced with widespread protests and social unrest against his government’s economic policies that led to widening inequality and a debt crisis, at the time, Marcos sought to protect his rule in the name of combating the growing communist militancy and the separatist movements in southern Philippines. The martial law was legally withdrawn in 1981, but Marcos continued his dictatorial regime until he was deposed by the People Power Revolution in 1986.

Under Marcos’ 14-year dictatorship, widespread human rights violations and political repression were commonplace, with rights groups documenting at least 3,257 extrajudicial killings and 77 forced disappearances of activists and opposition groups, along with more than 35,000 instances of torture and over 70,000 political imprisonments.

This year, the commemoration of the Martial Law era holds greater significance as the country inches closer to a general election in 2022. Incumbent president Rodrigo Duterte faces immense national and international scrutiny for the widespread human rights abuses, ever since he came to power in 2016.

“Forty-nine years later, and 35 years after the People Power uprising that ousted the dictator, to remember is not enough” read a statement by rights group, Karapatan. “We are all urged to go beyond remembering as the horrors of tyranny and dictatorship are right in our midst.”

Last week, the International Criminal Court also opened an investigation against Duterte, for the large scale of extra-judicial killings in his “war on drugs”, that is estimated to have killed between 5,000 and 20,000 by various groups, much higher than Marcos-era killings. According to rights group Karapatan, political violence and assassinations also peaked under the Duterte government documenting killings of at least 211 activists and a total of 414 victims so far.

The Duterte government is also facing criticisms over his gross mismanagement of the COVID-19 pandemic in the country and allegations of corruption in counter-pandemic efforts and vaccine procurement.

While Duterte may not be able to stand for re-election as tenure rules renders him ineligible for a second consecutive term, last month he announced his candidacy for the vice-president’s office, as a candidate for a competing faction in the ruling Partido Demokratiko Pilipino–Lakas ng Bayan (PDP-Laban). Many have noted that this is an attempt to secure immunity as vice-president if he is implicated in cases for his government’s actions in the future.

Apart from Duterte, the coming election will also include Marcos’ son Ferdinand “Bongbong” Marcos Jr., who was declared as a candidate of the Partido Federal ng Pilipinas (PFP, an ally of the Duterte presidency).

In Manila, demonstrators marched along with survivors and families of victims of Marcos dictatorship and echoed slogans like “Never Forget” and “Never Again”. They were seen holding placards and banners comparing the Duterte government with the Marcos regime and also calling for people to not vote for candidates that will return the Philippines to a dictatorship, a direct attack on Duterte and Marcos Jr.

“We need to turn our backs on the candidates who want to put us again under Martial Law,” said Kris Lacaba, son of a Martial Law victim and writer, Jose Maria “Pete” Lacaba, in a press conference on the eve of the anniversary. “Let’s not be subservient. Let’s be vigilant with what’s happening in our society.”

Speaking to Rappler, Neri Colmenares, chairperson of the National Union of Peoples’ Lawyer and former legislator, stated that “Our fight today becomes significant) not only to commemorate the struggles of the Filipino people during the Martial Law, but as a commitment also to fight this specter that is haunting the Philippines, which is another six years of Duterte de facto Martial Law.”