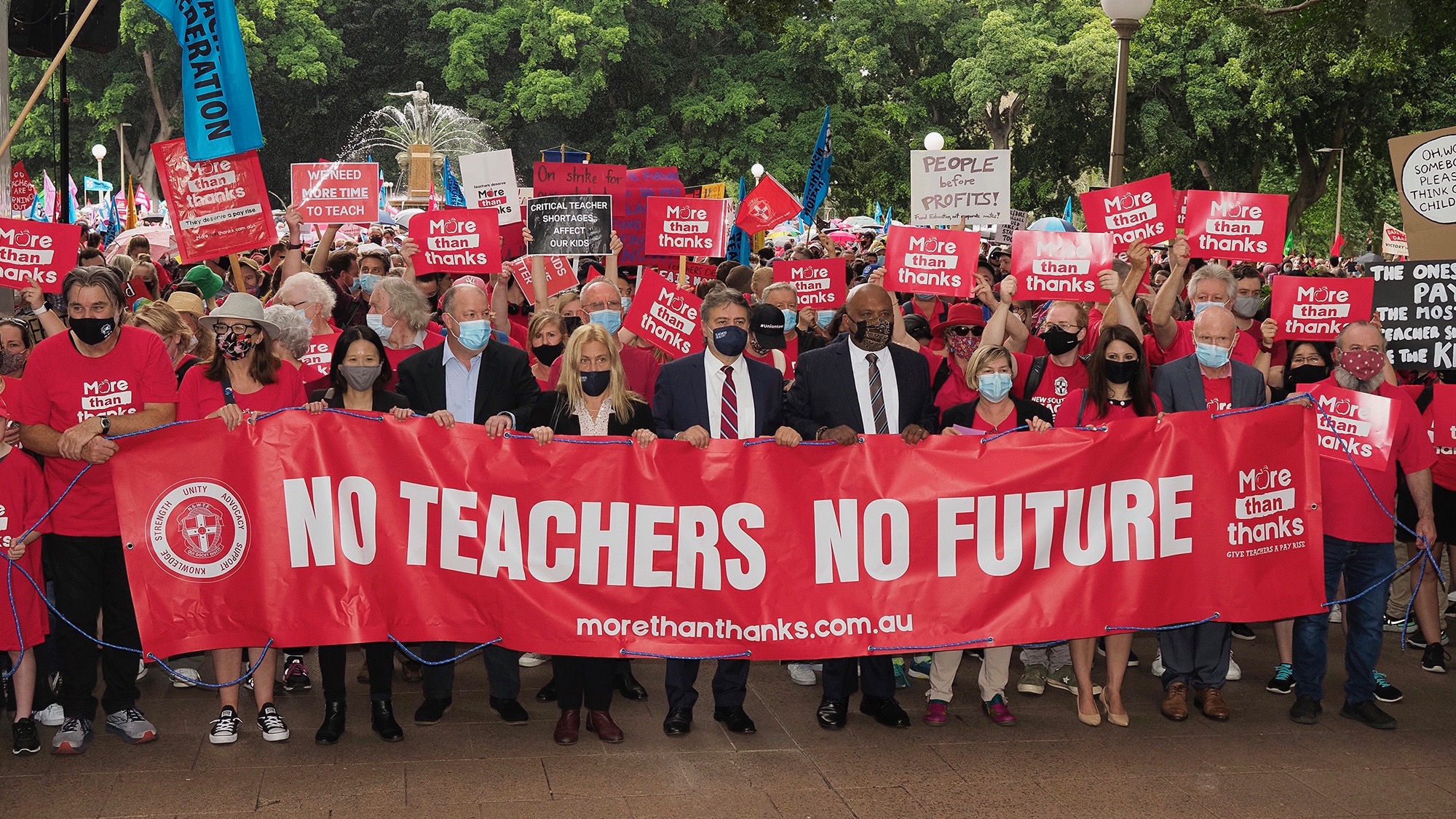 School teachers held a massive rally in Sydney as part of a day-long strike across the State of New South Wales. (Photo: NSW Teachers Federation/Twitter)

Thousands of workers participated in strikes led by a coalition of teachers, train workers and bus drivers bringing the most populous Australian State of New South Wales to a standstill. On Tuesday, December 7, over 50,000 workers were estimated to have participated in strike actions called by teachers and transport unions in the State against the government’s “anti-worker approach” in contract negotiations.

The strike began with a walkout organized by 1,200 bus drivers in Sydney over an ongoing dispute regarding pay negotiations on Monday, December 6. Bus drivers later joined school teachers and rail workers across the State in their planned day-long strikes on Tuesday, continuing their walkout.

While teachers refused to hold classes on Tuesday, rail workers held a reduced services strike by refusing to operate foreign-made trains that account for close to 75% of the State’s train services. All striking workers were organized by unions affiliated to the Labor Council of New South Wales, also known as Unions NSW, which represents around 600,000 workers across the State.

This culminated in one of the biggest strike actions to ever hit New South Wales. The teachers’ strike on Tuesday was the first in over a decade. Public school teachers defied a November 29 order by the Industrial Relations Commission to call off the strike and held a massive rally in Sydney organized by the NSW Teachers Federation.

Unions have been trying to negotiate better contract terms and pay conditions but have accused the State government led by the center-right Liberal Party of stalling talks and pushing its widely criticized neoliberal policies. The Liberal Party is part of the conservative Liberal-National Coalition that heads the federal government under prime minister Scott Morrison.

“The bus drivers walking off the job today have spent the last year exposing themselves to COVID-19 to serve the public, as have rail workers and teachers,” said Mark Morey, secretary of Unions NSW, a day ahead of the strike. “Now as inflation runs rampant, they are being rewarded with a pay cut and increased workloads.”

What an extraordinary day.

Over 50,000 teachers, rail workers and bus drivers stood up to the Government, went on strike and demanded a better working life.

This is people using their collective power to put their working life and destiny in their own hands.

History was made today. Teachers took their first industrial action in 10 years. Standing up for:
– more competitive salaries
– more sustainable workloads
– a government that listens

What are the demands?

The government’s failure to negotiate better wages and working conditions has been a common complaint of the striking workers. The NSW Teachers Federation, which organized over 15,000 teachers for the strike, argued that teachers have been overworked and underpaid throughout the pandemic.

On Tuesday in NSW, over 50,000 workers will strike against the NSW Government.

Schools, trains and many buses will grind to a halt.

The NSW Government has created this problem.

They neglected their workers, froze their pay & are trying to cut their workplace safety insurance

They argue that classroom teachers often have to work up to 55 hours a week to cover administrative and compliance workloads along with teaching, while close to 80% of the teachers have had to take classes outside of their expertise to make up for the shortage of teachers. According to the union, there are over 1,100 teaching vacancies across the State. NSW has the lowest teachers to students ratio of any State in Australia.

The key demands put forward by the teachers include an annual wage hike between 5% and 7.5% for the next contract agreement, a coherent plan to fill teaching vacancies across the State, urgent reduction of administrative and compliance workloads, and a two-hour per week release time for lesson planning and collaboration.

On the other hand, transport workers, represented by the Transport Workers Union NSW and Rail Tram and Bus Union NSW, are fighting to protect their wages and fight for better contracts while resisting the privatization of services.

Similarly, rail workers are protesting the proposed terms set out by Sydney Trains, which include bypassing workers’ consultation on changes to work safety and practices, reducing redundancy conditions and work casualization. Rail workers have been in negotiation with the management for over nine months with no results.

More strikes are expected to hit the State with another reduced services strike already announced by transport workers which will affect train and bus services on Friday, December 10, during afternoon peak hours.