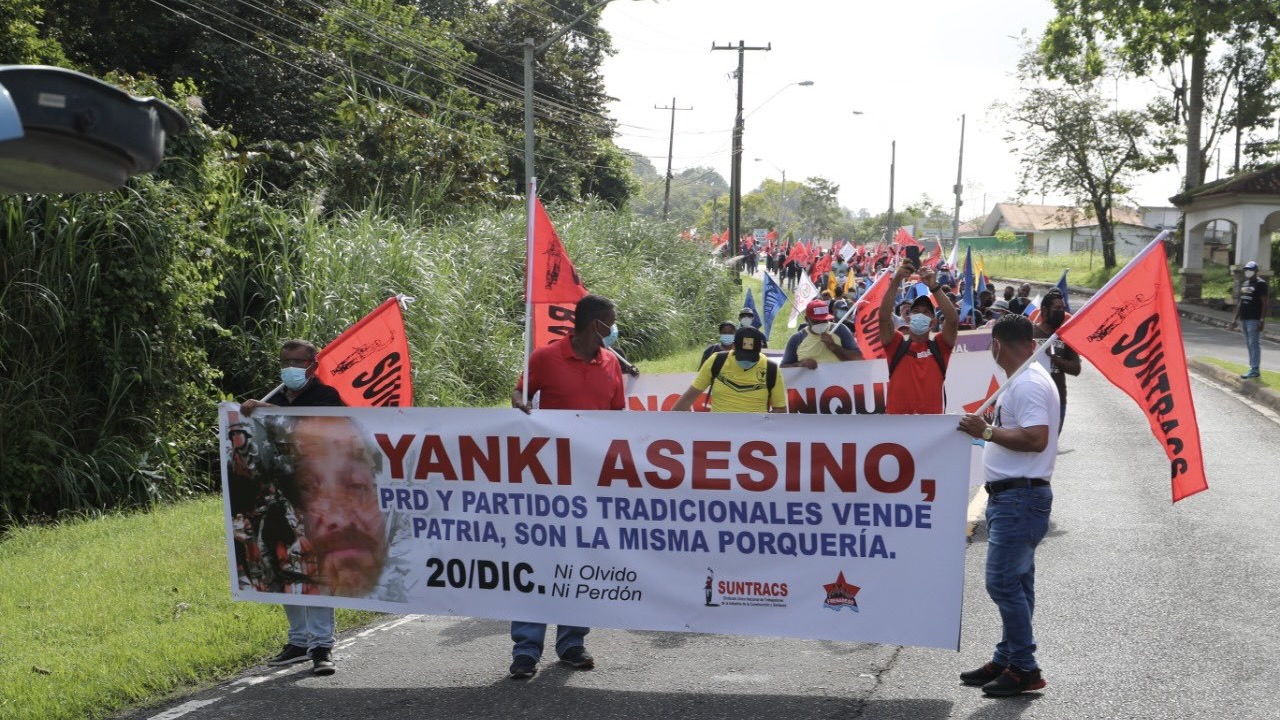 On December 20, members of the National Confederation of Independent Trade Union Unity (CONUSI) marched to the United States embassy to condemn the military actions that took the lives of innocent civilians. Photo: CONUSI/Twitter

December 20, 2021, marked 32 years since the bloody US invasion of Panama. On December 20, 1989, the US President George Bush launched Operation Just Cause, sending more than 25,000 troops into Panama to overthrow the government of Manuel Noriega and seize control of key military installations. The military invasion by sea, land and air lasted over a month until January 31, 1990, in which hundreds of innocent Panamanians were killed, injured, and disappeared in various attacks by the US soldiers.

The invasion turned the capital Panama City, Colón, San Miguelito, among other cities, into battlegrounds. According to official data, 516 Panamanians (200 soldiers and over 300 civilians) were killed during the invasion, but human rights groups say the real number is much higher and is between 1,000 and 3,000. In addition to human losses, about 20,000 people lost their homes and became refugees as a result of the destruction caused by the urban warfare.

The invasion of Panama provoked international outrage. The United Nations General Assembly and the Organization of American States also condemned it as a violation of international laws. The US president ordered the military action to “protect the lives of American citizens” and bring Noriega “to justice.” The announcement came days after Panamanian forces killed an American serviceman. Noriega was arrested two weeks later. He was taken to the US where he was sentenced to jail for drug trafficking and money laundering. Many allege that the invasion was a strategy to steal the country’s canal zone and consolidate its colonial control.

Since December 20, 1990, Panamanians have been carrying out a “black march” on the day to express their rejection of the brutal invasion and to demand justice for the victims of the unjust intervention and genocide. This Monday, on December 20, once again, hundreds of citizens and members of various social movements and human rights organizations took to the streets of the capital under the banner of “March for Memory and Justice.”

The citizens marched from the Monument to the Fallen in the El Chorrillo neighborhood, where the invasion began and the US soldiers killed hundreds of people in an indiscriminate bombing, to the National Assembly. They demanded justice for the mortal victims and their families, who have not yet been able to identify the remains of their relatives, whose bodies were buried in mass graves. This march was organized by the Movimiento Social por la Patria, Juventudes Revolucionarias, among several others.

In addition to the march, members of the National Confederation of Independent Trade Union Unity (CONUSI) marched to the United States embassy to condemn the military actions that took the lives of innocent civilians. Another group of activists visited the Jardín de Paz cemetery in the capital to pay tribute to the victims.

Meanwhile, the December 20 Commission for Truth, Memory and Justice, presented a report of its work to the nation in a press conference. Professor Juan Planells, the head of the commission, reported that in 2022 they will have a modern DNA laboratory for the identification of remains of corpses found in exhumations in different cemeteries.

Leaders of organizations such as the National Front for the Defense of Economic and Social Rights of Panama and the National Communal Movement Federico Britton condemned that the country’s governments have surrendered to Washington since then and have been reluctant in guaranteeing justice or finding the truth. They also pointed out that insufficient efforts have been made to compensate hundreds of relatives of the victims, innocent civilians and soldiers, who suffered the heinous crimes.

Trinidad Ayola, president of the Association of Relatives and Friends of the Fallen in the North American invasion, told Prensa Latina that “it is our duty to leave a legacy to the new generations, that is to make sure another December 20th is never repeated and that it is forbidden to forget what happened.”

Vlado Álvarez, a union leader, pointed out that “there is a need to consolidate the unity of the various popular organizations and bring awareness to the new generations about that genocide, which the six governments have maintained complicit silence.”

Union leader Marco Andrade on the genocidal act of terror waged by the United States on Panama, on this day in 1989, resulting in the killing of countless Panamanians. @conusi1 🇵🇦 pic.twitter.com/pMwg0RRCAH

On December 18, 2019, the government of President Laurentino Cortizo passed a decree declaring December 20 as a Day of National Mourning in remembrance of the victims of the US invasion. Social movements consider that it is insufficient, and have raised the demand for the creation of a museum that collects in images, testimonies, documentaries, the truth about the invasion and its consequences. 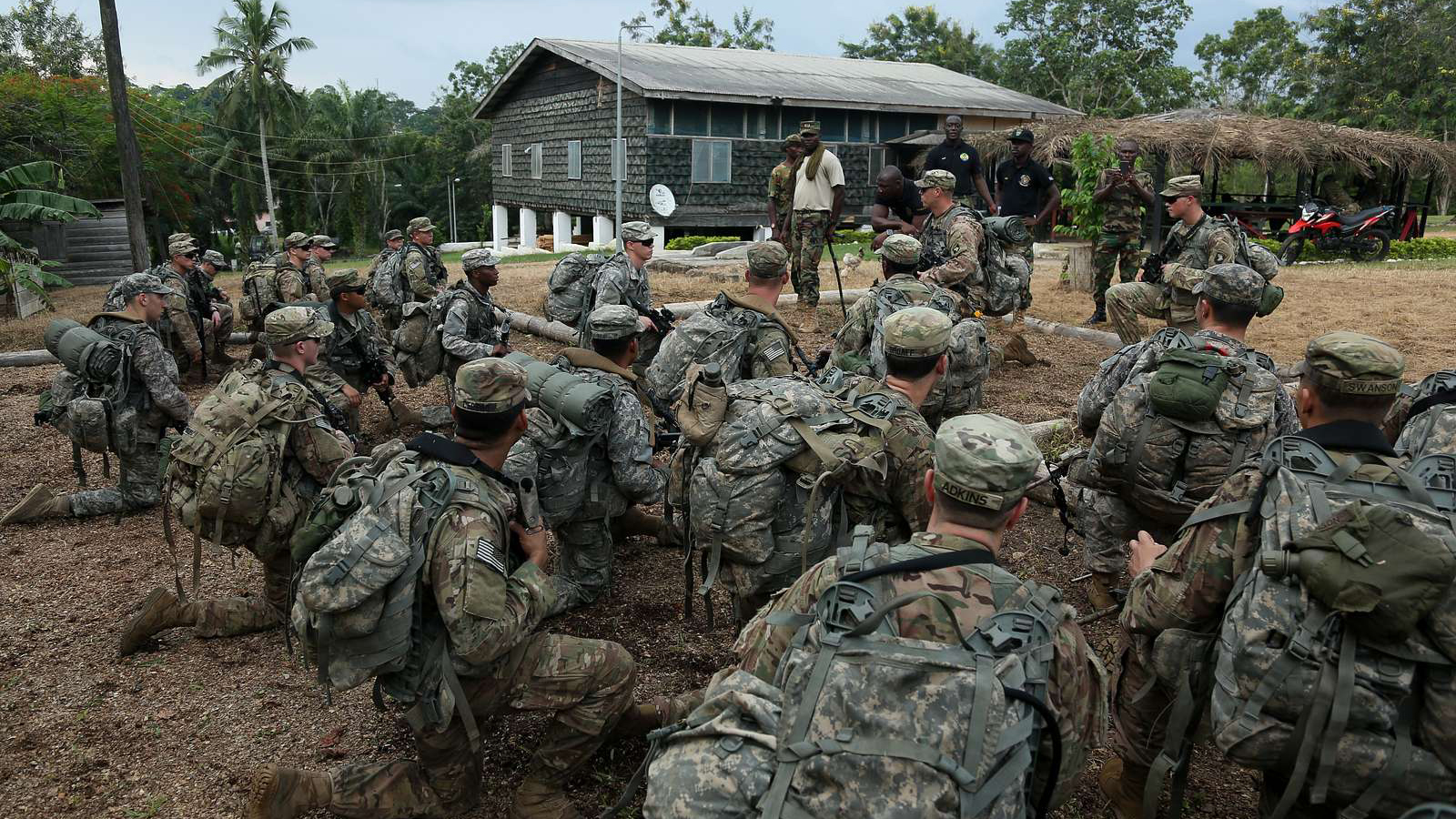 Why does the United States have a military base in Ghana?
RECENT ARTICLES